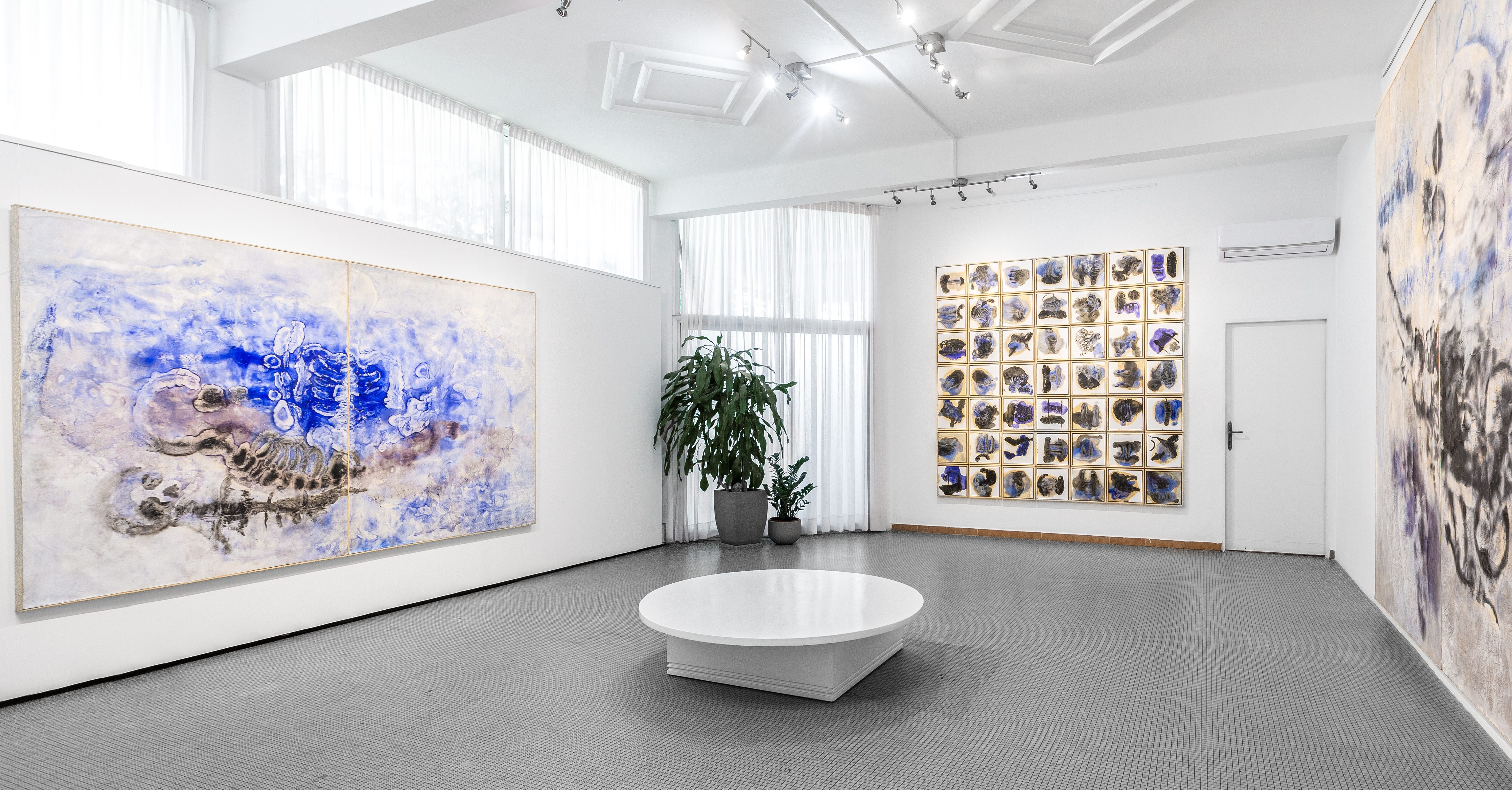 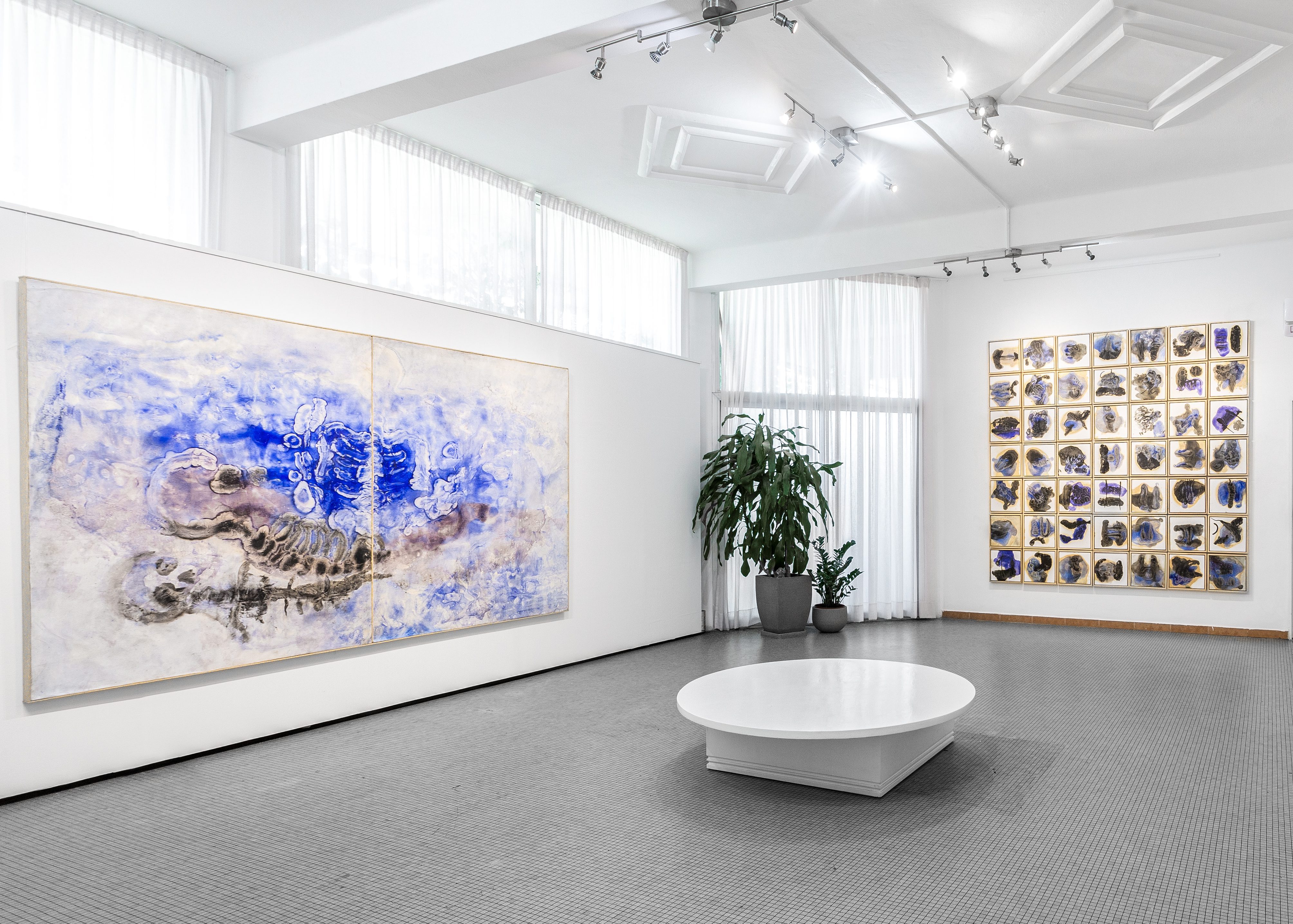 In his first monographic exhibition, Patrick-Joël Tacheda Yonkeu is presenting works made over the past ten years. The exhibition aims at an exhaustive presentation of Patrick-Joël’s artistic development. However, it also represents the coming to an end of a personal chapter. It is the expression of a story–with all its complexities and drawn conclusions–that closes, leaving room for something new, leaving room for a life that is transforming by losing its mute.

“The moulting time is the time also to meditate with the mutations that are yet to come; the time to think and rethink our ways of being in this world and society in relation to the passing of time. It is the time of the great quantum leap at the dawn of a new world that is already standing on our doorstep.”

Ascèse (in English Ascent), the canvas of great dimension, is a witness of this bodily reformation. Its texture’s imperfections and undulating surface (recalling the series presented at Dak’Art in 2018) are a testimony of the work’s moulting, as if the work almost refused to lay on canvas pulling its skin off. Diluted and multiform stains of primordial blue, recalling primitive intentions captured in an ancient dance, appear in great harmony. Forms that sometimes appear as details of a lab analysis and at times planetary visions of the world from above; artistic experiments that are thus both micro and macro perspectives.

Patrick-Joël’s body of work is strongly influenced by his interest in ancient history and mythology as spaces where to study and understand the origins of human civilisation and archetypes of our contemporary ways of living; or, as he puts it, “the essential knowledge that still permeates the world today”. The artist addresses the history of mankind to shed light on the way humans put themselves in relation to others, giving rise to conflicts and power structures.

Another core thematic the artist is interested in, is the ‘human versus nature’ relationship and its different manifestation throughout culture and religion. African Animism, as Asian Buddhism, places man in an equal relationship with its surroundings by considering everything a soulful being full of energy and life. On the contrary, Western civilisation puts man at the centre of the universe.

For Patrick-Joël, a man is thus no different from a plant, he has the same value as a rock, wind, air, sun or fire. His use of ephemeral paper, as well as the incredibly long drying process of the natural pigments and oils that he applies on it, reveal all together this kind of interaction; it is an earthy technique that imposes patience and waits such as nature does. Even more so, his process narrates a ritual. A ritual mindful of African traditions, closely connected to the cult of ancestors. Whilst producing, Patrick-Joël performs a ritual, with the being a space-time recording of such rituality. It is the residue of a ritual materialised on the physical support of the paper through meaning: a rituality of meaning.

To make these works -from the smallest to the largest – Patrick-Joël lets go of his consciousness, almost losing himself within gestures. Over the canvas, our eyes are filled with encounters, crashes and collisions made of ancestral colours in constant movement. In them we glimpse the artist’s physical gestures contrasting the fact that these works took a very long time to rest and become. Hence, they are simultaneously explosive and contemplative.

All in all, the artist’s discourse is about a notion of collectiveness. It regards what it is to be human today and interact with each other in a morally sound way. The motive behind Patrick- Joël’s making of art is to rediscover a collective moral consciousness that is fair, just and better suited to our times.

He invites the viewer to go back to the origins of human civilisation and to rethink history and development in order to avoid an endless repetition of our same mistakes, over and over. It is only with a multilateral vision of the world as opposed to a mono-centric one, that we can embrace an objective just re-reading of our past, thus avoiding a collective amnesia on what went wrong. However, in this exhibition he also invites the viewer to go through a personal journey that has led to moulting as a time for an artistic renaissance and rediscovery.

“Perhaps, it is just a matter of rhythm, rhythm of the earth, of transmutation, or the transcendence of the « I » for the embracing of the « we » in its essence. »