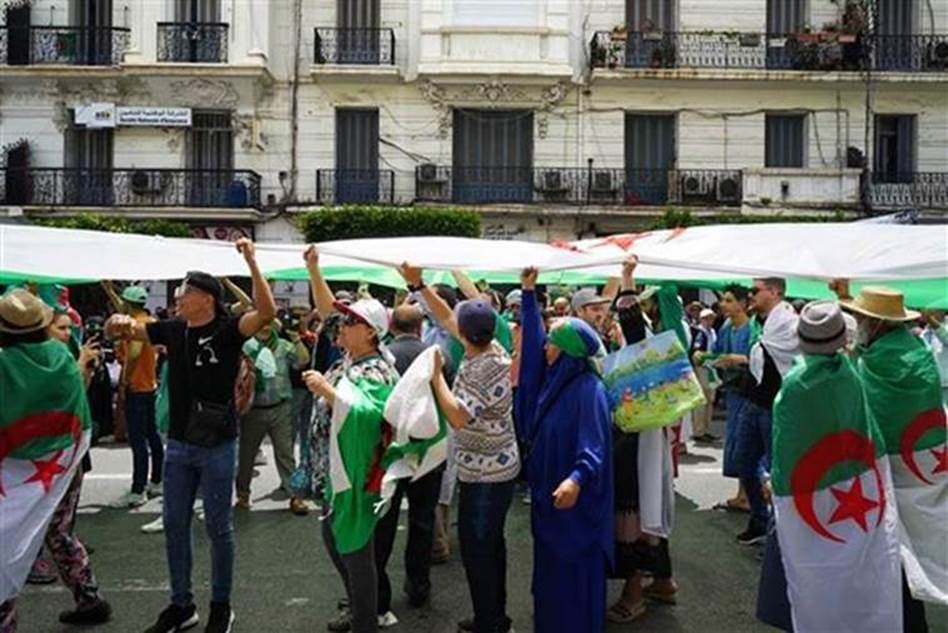 Katia Kameli: She Rekindled the Vividness of the Past

With “Katia Kameli: She Rekindled the Vividness of the Past” – Kameli’s first solo exhibition in a German institution – the Kunsthalle Münster presents an exhibition about narration and thus invites its visitors to deal with both the construction and deconstruction of history.

A special focus lies on the complex relationship of colonialism and post-colonialism, including post-colonial remembrance. In the context of her preoccupation with the history of Algeria, the French-Algerian artist illustrates that the term post-colonial is not at all limited to a temporal thereafter; it is in fact closely linked to the social conflicts of contemporary society. In her works, Kameli explores the power of narratives, the role of the “image factory” and its influence on the formation of a national identity. She examines how colonial and post-colonial history manifests in images and how their existence but also their absence continue to impact the political heritage of a country. She investigates which role images play in the production of knowledge, which political and cultural power they possess, not only concerning Algeria’s current historiography but also in a quite general sense. Kameli raises questions about prevailing power structures, including those related to visual definitional power. In this regard, she not only focusses on the past but also reveals in which way the past inscribes itself into the present and the future.

Katia Kameli’s multi-part video work “Le Roman Algérien” (The Algerian Novel, 2016, 2017, 2019) is at the centre of her exhibition at the Kunsthalle Münster. In addition to the first two chapters, here, the newly produced third chapter will be on view for the first time. Based on a variety of iconographic sources—above all postcards, photographs or their negatives—the artist looks into the complex relationships of a nation to its history in the three chapters of her Algerian Novel. Serving as a point of departure is a photo kiosk in the inner city of Algiers that basically functions as an open archive performing memory work on a day-to-day basis. The kiosk’s wall of pictures appears like a mosaic made up of individual fragments of Algerian history, whereas the presentation does not follow any specific order but rather can be described with the Warburgian classification principle of good neighbourliness.

Besides her multi-part video work the Kunsthalle shows her film “The Storyteller” (2012) as well as several photographic works, collages and drawings by Kameli, in which she likewise probes the ambivalence of historical narration and remembrance. For her two-part work “Trou de Mémoire” (2018), the artist took a picture of the memorial “Le Grand Pavois d’Alger, Monument aux Morts d‘Algers” (1928) by Paul Landowski, or rather of a version reworked by the Algerian sculptor M’hamed Issiakhem. In 1978 Issiakhem had enclosed Le Pavois in a sarcophagus of concrete. Though the colonial monument was hereby overwritten, the precedent basic structure continues to show through—somewhat like in a palimpsest. Based on a collage of postcards, Katia Kameli unveils the monument’s past, thus giving insight into what lies behind the façade. For her work “Bledi a possible storyboard” (2002), all with the idea of perhaps realizing a film, Kameli transferred selected details of historical photographs onto transparent paper. Here also, a story somewhat resembles a sequence of images, where the artist’s playful approach to the materiality lends the motives an ephemeral character—merely suggesting rather than fully formulating them. Kameli’s work is complemented by a picture that Louiza Ammi took during the Algerian civil war. Katia Kameli looks at forgotten or missing images. She sorts, analyses and reworks, to then create a path that leads into Algerian history and contributes to reconnecting with the latter. Through her works the artist thus hints at a longing to free such images of their vagueness and to infuse them with a truth, a controllable truth. At the same time, they spell out that there is, ultimately, no such thing as definiteness but rather a multitude of stories calling for investigation.

Katia Kameli is a French-Algerian artist. Following her studies at the Academy of Fine Arts, Vienna, she graduated from the Ecole Nationale Supérieure des Beaux-Arts in Bourges in 2000. She received a postgraduate degree in New Media in 2003 from the Ecole Supérieure des Beaux-Arts in Marseille. Kameli’s work is closely linked to her personal experience of dual identities, exploring multiplicity and the ‘in-between’. Through video, photography, installation, she investigates intercultural spaces, intersecting identities and their construction. Thus, she positions herself as a hybrid, using a ‘third space’ that enables the emergence of other visions, forms and positions. This ‘third space’ questions historical accounts and can generate a critical stance that allows for the rewriting of hegemonic narratives.