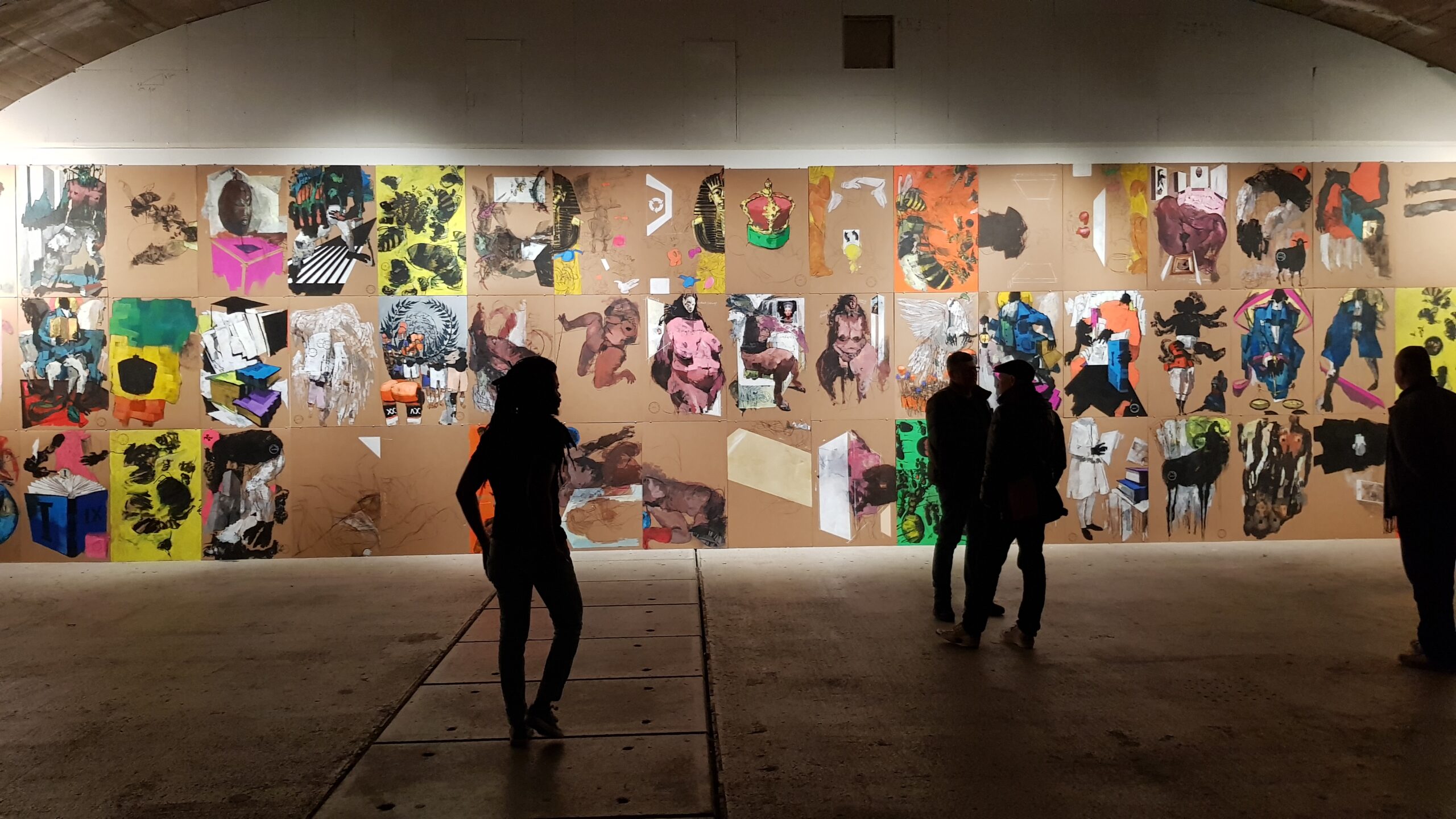 “Girmachew Spiegel ( mirror)“ at Kunstverein Familie Montez presents selected works from his latest series (2015-2018) in one exhibition for the ﬁrst time.

The series shown are titled « circle », « wall », “x-book », “€-waste », « Deva Kolam », « Alkebu-Lan », « seed ». The series have diﬀerent content, but each emerged from the idea of the previous series and they have one commonality. They all address issues of the artist’s identity. They are a mirror of his daily life, his experience of social life, politics and culture.

The series « circle » shows our diﬀerences based on diﬀerent characters, colors and sizes. The circles that appear in the works are a call for union, for common thinking. After engaging in similarities, the artist asks what separates us humans, what destroys the circles. The series « wall » tells the story of our system. The walls in it represent a hypocritical system and false thoughts that create a large, dividing wall between us. Borders are diverse: geographic boundaries, religious boundaries, sexism and many others. Borders are also created through knowledge. Knowledge can also separate us like a wall, creating boundaries in our heads. Knowledge can furthermore lead to extremism. This is the topic of the series “x-book ». Another consequence of knowledge is the increasing capitalism that destroys more than it builds. It leads to more and more consumption, extraction of raw materials and garbage. With that the artist deals in the series « € waste ». He wonders where the spread of cities, the centers of capitalism, will lead in the near future. Where is there still room for nature? What happens to insects and animals? In his next series « Devalokam (The World of the Gods) », the artist celebrates the beauty of nature. Inspired by a stay in Kerala, he concentrates in his works on the hope and preservation of creation. The artist looks to India for his home continent Africa. The series « Alkebu-Lan (Africa) » deals with the inﬂuence of Western culture on African countries, which permeates all spheres: language, politics, economy, education, even culture. In his latest series, « seed, » the artist returns to the question of knowledge, from the forbidden fruit of Adam to the knowledge and power of technology today. In the end, the series asks « will artiﬁcial intelligence soon rule the world? ». Girmachew painted and drew on paper and canvas until 2015. Since 2015 he uses as his main material art cardboard. The cycle in which cardboard is created represents the cycle in which a tree becomes paper, then paper is made from recycled paper and ﬁnally from this cardboard. Through his works, Girmachew wants to turn this end product into something valuable, turning garbage into life, and turning bad into good.