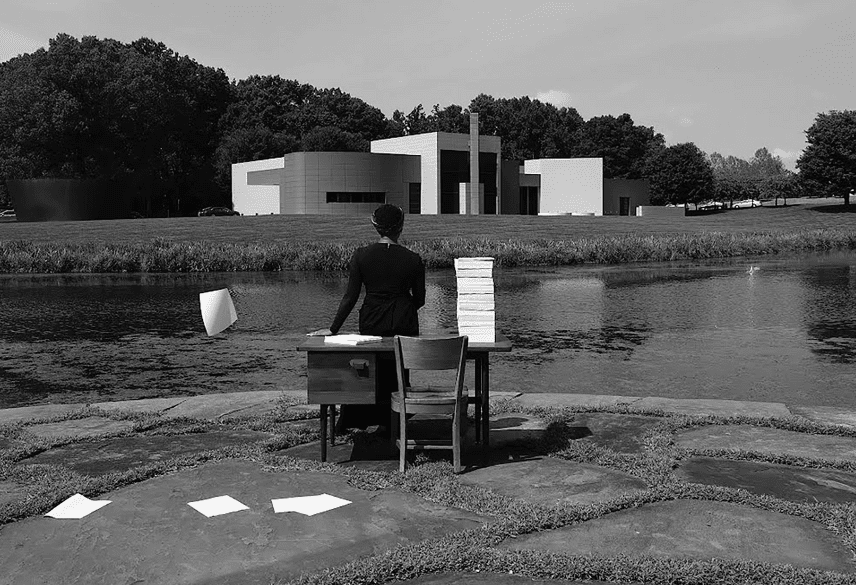 Carrie Mae Weems: The Evidence of Things Not Seen

Württembergischer Kunstverein presents The Evidence of Things Not Seen, the first comprehensive solo exhibition of the artist Carrie Mae Weems in Germany.

Featuring around 40 bodies of work including extensive photographic projects, videos, objects and installations, the exhibition offers a complex read of Weems in over more than 35 years elaborated artistic practice. An immersive spatial setting is being developed specifically for the exhibition that follows Weems’ wide-ranging approaches to expand photography and its conventions of presentation.

Newly produced, the photo series Monuments–which so far only existed in the form of a booklet–deals with the hegemonic colonialist implications of public commemoration, tying in with highly topical discourses, and referring to one of the main aspects of the exhibition.

About The Evidence of Things Not Seen
A major concern of The Evidence of Things Not Seen is the interrogation and appropriation of dominant historical narratives as they are generated by monuments, architecture, art, language, or mass media, especially photography, and the excavation and unfolding of what these narratives repress. The history of violence is counter-read by histories of resistance, in which the black body, rituals, spirits and spirituality take a central role. In doing so, Weems releases imaginations of possible other trajectories of the past and thus of the future. For it’s the future that Weems addresses in her constant critical interrogations of history.

Since the beginning of her engagement with photography in the late 1970s—being marked by the examination of a wide spectrum of artists ranging from Robert Frank to Roy DeCarava—Carrie Mae Weems is deeply concerned with the limits of photography and the expansion of its canon including the excluded and the forgotten. Furthermore, she investigates how photography as well as other media and forms of narration produce constructions of race, gender, and class.

In the extensive exhibition at Württembergischer Kunstverein, Weems’ works in particular show that she not only deals with the repressions and violence perpetrated through photography, but also with the possibilities of deconstructing this violence through the medium of photography itself and with its potentials for self-empowerment.

In several photographic and video projects, Weems engages with recent structural racist police violence against black bodies. In the videos topics of escape, mourning, remembrance, and protest are woven into poetic manifestos against forgetting.

The exploration of landscapes and the traces of diaspora inscribed therein, the relations between architecture and the black body, the ambiguity of popular cultures like carnival and vaudeville, as well as the poetic and political implication of voice and music are likewise important fields of reference in the exhibition.

The Evidence of Things Not Seen is organized by Württembergischer Kunstverein in collaboration with Fundación Mapfre.

About Carrie Mae Weems
Carrie Mae Weems is one of the most important and influential contemporary artists in the United States, whose impact extends far beyond the art scene. She works in and between the realms of photography, video, poetry, performance, and installation and develops collaborative projects for the public space. Additionally, she teaches, curates exhibitions as well as transdisciplinary events as an extension and resonant space for her artistic practice.

The black body, its grace, beauty, vulnerability, and strength as well as its violation and representation, are central themes in Weems’ work. She examines it in its relationship to architecture, city, landscape, or other bodies, on the threshold of presence and absence, and as an object of optical media or art history. Weems herself appears in many of her image series, but not as an autobiographical instance, but rather as a witness, companion, or guide who brings us closer to certain places and situations.

She has received numerous awards, grants, and fellowships, most recently the Artes Mundi Prize 2021, and is currently an artist in residence with the Park Avenue Armory program.