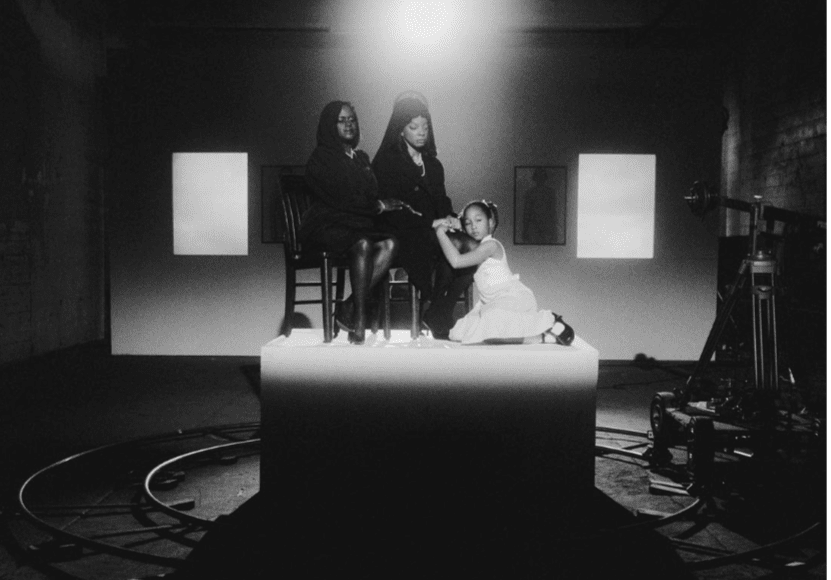 Throughout her career Weems’ works have compelled viewers to actively consider how the world is structured, revealing systems of oppression and inequality while exploring the relationships between power, class, race and gender. Push presents several bodies of work, which look at these themes in relation to how the past comes to bear on the present. In this regard Weems reflects on history in order to engage with the present and question where we might be going.

The exhibition will feature Ritual and Revolutions, Weems, largest immersive installation, which marks one of the artist’s earliest forays into three dimensions. Composed of diaphanous printed cloth banners organized in a semi-architectural formation and a poetic audio track, Ritual and Revolution explores the historic human struggle for equality and justice, including references to the Middle Passage, the French Revolution, World War II, among others.

Placing the spotlight on Black women in popular culture, Slow Fade to Black (2010) recasts images of singers and performers captured at the height of their success in the 20th century. The series features portraits of Josephine Baker, Nina Simone, Leontyne Price, Dinah Washington, Mahalia Jackson, Shirley Bassey, Ella Fitzgerald, Abbey Lincoln, Eartha Kitt, Koko Taylor, and Katherine Dun- ham. While some of these women retain their iconic status today, others are relatively unknown. Weems contends that their legacies fade as time elapses, yet many of their white, and especially male, counterparts – often performers deeply influenced by groundbreaking Black artists—disproportionately maintain prominence; a circumstance she seeks to illuminate and change.

Carrie Mae Weems‘ photographs and short films have gone a long way toward resetting our expectations of pictures and challenging our assumptions about her largely African-American subjects. A gifted storyteller who works accessibly in text and image, she has created new narratives around woman, people of color and working-class communities, conjuring lush art from the arid polemics of identity. Weems became the first African-American woman to have a retrospective at the Guggenheim.
Weems is the recipient of prestigious awards, grants and fellowships, including the BET Honors Visual Artist award, the Lucie Award for Fine Art photography, the MacArthur “Genius” grant, the Congressional Black Caucus Foundation’s Lifetime Achievement Award and the Prix de Roma. In 2019 Weems was nominated for the prestigious Artes Mundi prize and for the The Royal Photographic Society Award 2019.

Weems has participated in numerous solo and group exhibitions at major national and international muse- ums and is represented in public and private collections around the world, including the Metropolitan Museum of Art, The Frist Center for Visual Art, Solomon Guggenheim Museum in New York, and the Centro Andaluz de Arte Contemporáneo in Seville, Tate Modern London and Museum Ludwig, Cologne.