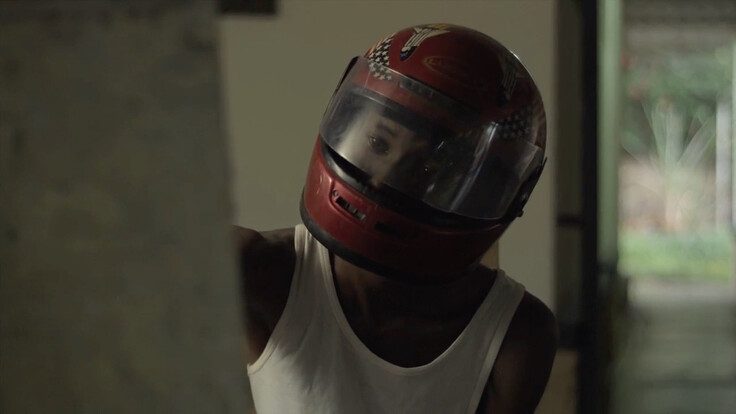 Artist Cinemas will focus on exploring the moving image as understood by people who make film. It is informed by the vulnerability and enchantment of the artistic process—producing non-linear forms of knowledge and expertise that exist outside of academic or institutional frameworks. It will also acknowledge the circles of friendship and mutual inspiration that bind the artistic community. Over time this platform will trace new contours and produce different understandings of the moving image.

Recent years have seen a vast proliferation of moving image in art exhibitions and an increasing interest in artists’ work by film festivals. Most of these platforms reflect the perspectives of curators and film selectors, who usually do not make films themselves. Artist Cinemas is a new platform that is programmed by artists as artists: people with an implicated knowledge of film.

It will begin with École du soir, a program of films, video works, and interviews put together by Christian Nyampeta. Each film will be screened on e-flux Video & Film for one week and will be accompanied by an interview with the filmmaker.

École du soir: Six Films, from Rwanda and Beyond

It is almost obsolete to mention that the ongoing outbreak of the coronavirus has created a crisis, a word that refers to a crossroad, or more accurately, to the lack thereof. What started as a health crisis has created an absence of an outside—it is not easy to imagine an exile from the current tension. “Usually,” during a militarized conflict, one tries to flee to a neighboring country. But where can one escape a pandemic? In contrast, this current totality is implanted in the word pandemic itself: pan (all) demos (people). This panoramic dimension compels us to connect the plural experiences of this pandemic with other crises that now seem located in past times and remote places such as Rwanda, but are actually still shifting the way the world thinks and sees itself.

At the same time, the past weeks have accelerated the widening of the already large digital divide between regions and art institutions that can pivot to a larger online presence, and those regions, histories, and times that are not able to do so.

Which is why it is more urgent than ever to start “a linking of phrases,” so that, as depicted in some of the selected films, those phrases from times that seem distant from the screen and the places that may feel remote from the engines of global communication may come into dialog with those who now live solely online, as is the case in much of New York.

Presented a week each, the following six films are not direct points of comparison to the current crisis but reflection devices that draw from localized specificities and historical events, in order to make a linking with the pandemic. The sense of isolation, alienation, and despair felt today finds echoes in these films, as their makers navigate the afterlives of the crises that still shape their present. Effectively, although the geographic and economic scales of the current pandemic are unprecedented, the films bring home the fact that some members of the societies in which the films are located feel or have felt as though their existence is a form of quarantine, characterized long before this moment by trans-generational trauma, the disappearance of habitable environments, exile, and even genocidal brutalities that take away the ability to mourn. Each film is accompanied by a newly commissioned dialog that loosely relates the film to the ongoing pandemic.

This program is an iteration of “École du soir” or the evening school, a multiform hosting structure for collective thinking, action, and reflection convened by artist Christian Nyampeta. It expands upon the idea of Senegalese film director and novelist Sembène Ousmane, who considered cinema to be an “evening school” informed by orality, sensuality, and conviviality within the realm of art learning and making in his region, as well as by the visual and textual histories, social struggles, and hopes, in mutuality between his own locality and the world at large. An evening is a moment of suspension, a sanatorium of time, as it awaits the resolution of celestial forces. It is neither day nor night: it is a rapid standstill and in it reverberates the current conditions of “our” quarantine.

In this work of international recognition, the ambitions of a film director are challenged by history, memory, and daily life. In the words of writer and critic Frieda Ekotto, Grey Matter“traces, in different domains and voices, dynamics of abjection and pain and the ethics of love both in and beyond trauma,” and is “a reflection on how Rwandans imagine, speak of, and visualize the relics of trauma.”

A Walk is a psycho-geographical survey from Lagos and Abuja, conceived as an interior cartography mapped onto the external environment traversed by the artist Rahima Gambo. Rahima uses A Walk as a narrative, mobile, and open-ended mechanism that has no beginning, middle, or end, that yields stills, moving images, and an assemblage of found objects sculpted together from objects picked up on her “path.”

Keza, both lonely and desired, secretly records the conversations of guests in a café where she works as a waitress and invents for herself a life made up of a thousand lives.

Polyglot is a web series about the lives of young German artists of African descent, as they navigate German society. In Le Mal du Pays, rapper and poet Babiche Papaya is homesick and frustrated by the maintenance of a natural haircare routine.

“People only know where one country ends and another begins because people have said it is so. The land doesn’t know. The land probably doesn’t care. Words kill.” So begins the narration of Promised Lands, as the artist tries to make a film but is interrupted by family conversations in rural Uganda.

In a speculative world made uninhabitable by ecological devastation that ensued after the Third World War or the Water Wars, the remaining survivors of the East African region live under lockdown in controlled settlements. However, a young woman rebels against the directives of the governing council and ventures onto Earth’s ruined surface.

Artist Christian Nyampeta convenes the Nyanza Working Group of Another Roadmap School. His recent solo exhibitions include École du soir at SculptureCenter in New York; A Flower Garden of All Kinds of Loveliness Without Sorrow at the Museum of Contemporary Art GfZK in Leipzig, co-commissioned with Contour Biennale 9 in Mechelen, and co-produced with Kunstenfestivaldesarts, Brussels, Perdu Amsterdam, and Wilfried Lentz Gallery in Rotterdam; and Words after the World at Camden Arts Centre in London. He contributed to the 5th Ural Industrial Biennial of Contemporary Art in 2019; the Dakar Biennial 2018; and the 11th Gwangju Biennial in 2016. Nyampeta runs Radius, an online and occasionally inhabitable radio station, and he completed a PhD in Visual Cultures at Goldsmiths, University of London. He was awarded The Art Prize Future of Europe 2019 at the Museum of Contemporary Art GfZK in Leipzig, and the European Union Prize at the 12th Bamako Encounters—African Biennial of Photography.