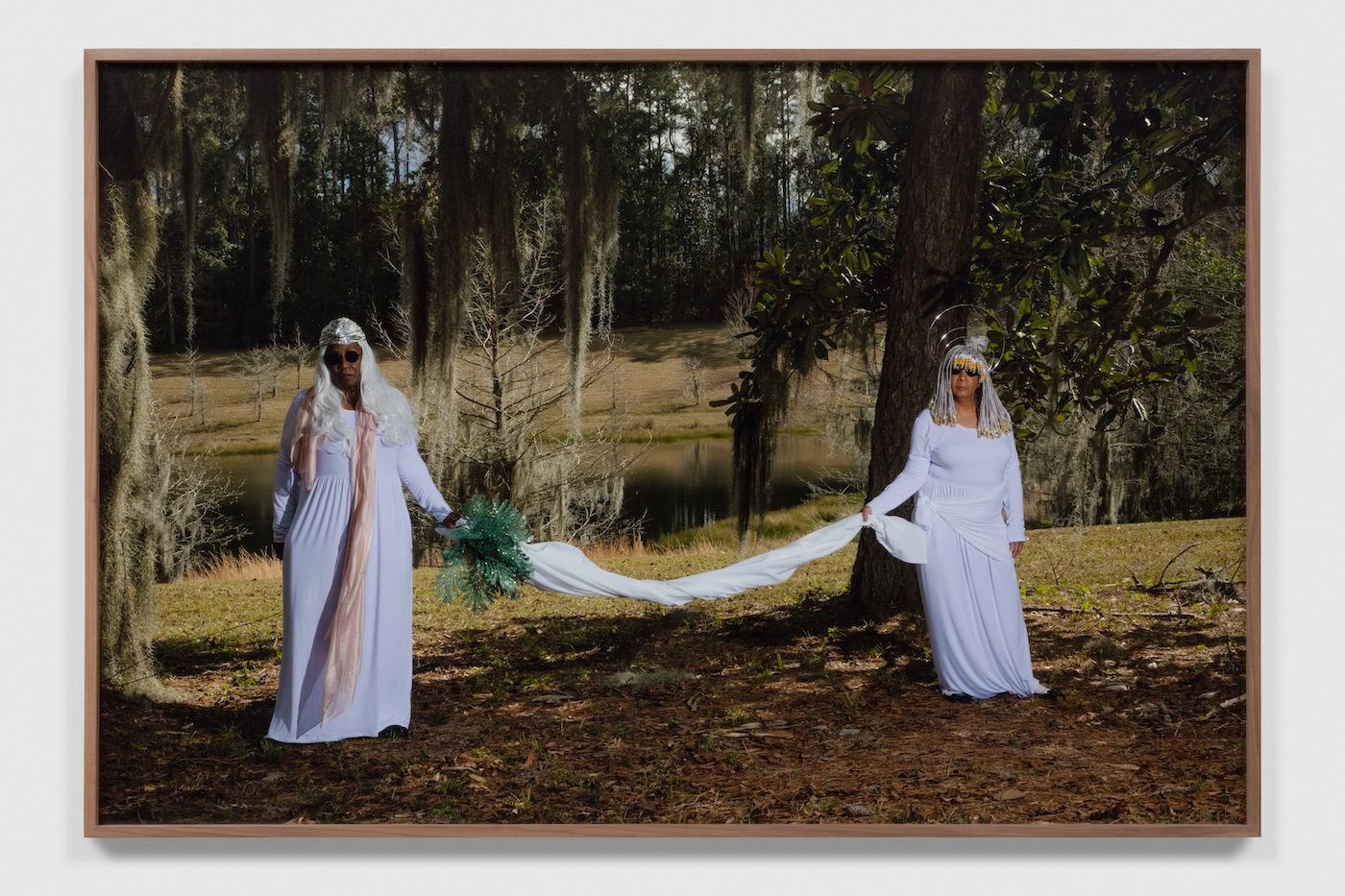 For A Romance of Paradise, Hamilton will present new photographs, videos, and sculptural works that highlight the artist’s ongoing exploration of interwoven themes such as environmental justice, folklore and mythologies, and the traditions of communities living in vulnerable landscapes within the rural American South. The title of the exhibition takes the original denotation of the word paradise, meaning “heaven,” underscoring the myths of an Edenic southern landscape formed during the exploitative and violent southward expansion of the United States.

A Romance of Paradise is centered around the undeniable verity that the development of the United States was an expansion squarely rooted in the creation of narratives. In contrast to the West, which was viewed as an open range to be conquered and settled, the South was surrounded by optimistic legends of a rich, fertile landscape primed for cultivation. Some early explorers to southeast America maintained the view that the biblical Garden of Eden was literally located on the 35th parallel north, the length of which runs from New Bern, North Carolina, to Memphis, Tennessee. Within the works on view, Hamilton looks at the formation of these mythologies and the way in which brutal colonization of land and people have molded contemporary beliefs and current realities, such as the continued exploitation of land and resulting climate change crisis that often disproportionately impacts communities in the rural Black South. The artist deftly explores the often less visible yet resilient histories of the region, driven by her own connections to Kentucky, where she was born, to Florida, where she grew up, to rural Tennessee, the location of her maternal family’s homestead. Hamilton weaves in these personal narratives with pressing contemporary issues, through her photography that combines the lush landscapes shot in rural Northern Florida with the complex lived experiences of its inhabitants, and sculptural works that evoke a land that is simultaneously idyllic, fragile, and haunted by its own history.

A Romance of Paradise will include recognized elements to the artist’s work and new interpretations of recurring items and motifs. Hamilton’s familiar fencing masks, adorned with gathered materials such as feathers and botanical designs, will be presented in a lighter color palette, contrasting the warriorlike appearance of the masks, as well as mixed media works from the artist’s Yard Signs series. Additionally, new sculptures from Hamilton’s Creatures series will be on view. The sculptures, taking forms of an alligator, white-tailed deer, and a rattlesnake – all found in her home region of North Florida, present visions of predator and prey in a delicate, white finish reminiscent of porcelain. Taken as a whole, the ethereal colors and textures create, at first glance, a heavenly, immersive landscape. However, upon closer examination, the snarling creatures and warlike masks interspersed in the space speak to an underlying violent depth.

“The works in A Romance of Paradise comprise a narrative ecosystem that is both tangible and mythic. The photographs, videos, and sculptures explore how historical myths used to justify violent expansion have contemporary implications affecting present-day landscapes and those living therein, not only in the American South but throughout the world at large.” said Allison Janae Hamilton.

Many of the artworks in A Romance of Paradise draw from early African American nature writing, rituals of hoodoo and traditional healing modalities, botanical drawings, and contemporary lived experiences of communities navigating the distinct impacts of climate change within the South. By drawing together elements from these sources in her deeply personal, interdisciplinary practice, Hamilton interrogates how these histories and myths can give clues to present day experiences and the precarious implications of environmental exploitation on the future. In Hamilton’s photography, for instance, the artist imbeds friends, family, and herself as actors against the backdrop of Northern Florida, bringing together elements of landscape and portrait photography. Adorning her subjects with objects gathered from the environment and combining them with both timeless and contemporary symbolic gestures, Hamilton creates narrative portraits of the actors who are inextricably linked to and disruptors of an environment that collapses history, present, and future.

Shown together, the works in A Romance of Paradise explore how human intervention on the landscape over time has impacted the communities that inhabit it today, presenting an image that is contemporary yet ancient, captivating yet disturbing. Each element of the exhibition brings forth the rituals that work within and around these landscapes, demonstrating the continuation and precariousness of the notion of the American Eden.