Gallery MOMO welcomes Robert Pruitt at Johannesburg as the first artist of Gallery’s new residence for 2015.

Robert A. Pruitt, born in 1975, is an artist based in Houston Texas. He earned his B.A. at Texas Southern University and his MFA from the University of Texas in Austin, focusing on painting and drawing.

Pruitt works in a variety of materials but his practice is chiefly centered on rendering portraits of human body, specifically the black body. He projects onto these bodies a juxtaposing series of experiences and material references, denoting a diverse and radical black experience and future. Although Pruitt leads a steady solo practice he also pursues an active collaborative impulse. He is a founding member of a number of artist groups including Otabenga Jones & Associates, MF Problem (with his Fiancé, Artist Autumn Knight), a loose collective of local Houston artists sometimes working under the name STACKS collective and he is co-director of Houston Open Studio Tours.

He has exhibited his work locally, nationally and internationally, notable at the Museum of Fine Arts Houston, The Contemporary Arts Museum Houston, The Dallas Museum of Art, The Bronx Museum of Art, the 2006 Whitney Biennial, and most recent a solo exhibition at the Studio Museum Harlem. 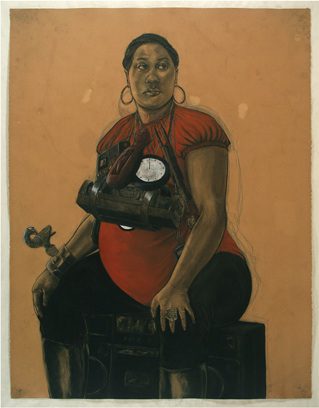 „ I work in a variety of materials, including sculpture, animation, and photography, but my practice is chiefly centered on the drawing portraits of the human body, specifically the black body. Through my drawing process these works quickly become profiles rooted in a fictional ethnography. I project onto these bodies a juxtaposing series of experiences and materials, denoting a divers and radical black past, present and future.

Through references of Hip hop, science and Sci-Fi, technology, comic books, Black political struggles and traditional African cultures, a narrative of resistance emerges. This narrative, thought unspoken in most of the work, has for a long time been the core ideology of my creative output. I am interested in how the creative expressions of a people and culture assist in that resistance and in re-centering one’s humanity.“ (Robert Pruitt)