THERE ARE WORLDS OUT THERE THEY NEVER TOLD YOU ABOUT

Neo Musangi met with Jackie Karuti, with whom they chatted about the exhibition —There Are Worlds Out There They Never Told You About— shown this last summer at the Goethe Institute in Nairobi.

Jackie Karuti, Untitled from the series There Are Worlds Out There They Never Told You About, 2016. Photo. Courtesy of the artist

Nairobi-based multi-media artist Jackie Karuti—better known as Karuti III—is not even thirty yet but has continued, over and over, to push our thinking not only on experimenting with styles and techniques but also on the excessiveness of human imagination to linear temporalities and spatial limitations.

Neo Musangi met with Karuti, with whom they chatted about the exhibition —There Are Worlds Out There They Never Told You About— shown this last summer at the Goethe Institute in Nairobi. The exhibition consisted of ten drawings, a watchtower, a fence, an animation video, an installation video and an ephemeral sketch of what Karuti said was a Black man, on the floor. The exhibition was, among other things, the story of a Black man wandering on an island, undersea other-worlds, and a murder of crows that sometimes control satellites.

Neo Musangi: Your last solo show, Labyrinth, has been described as somber, dystopic, and even at times morbid. Have you finally found a way out of the labyrinth that is life and found A Great Perhaps [an allusion to Karuti’s earlier work] in these other possible worlds you create in this new body of work?

Jackie Karuti: It was never my (conscious) intention to connect these bodies of work, which are all powerful and stand strongly by themselves. I guess it’s always tempting to have all your work connect to each other at some point but in this case I think it’s because I’m constantly thinking about departures in relation to death, specifically suicide, and now here with the possibility of alternate universes.

NM: Do you see this new work as somewhat in conversation with your earlier work (or not) and in what way?

JK: By earlier work do you mean Labyrinth? If yes, then absolutely. Only that with this current work, the idea of exiting this world is not by taking one’s life but by imagining and creating an alternate one. 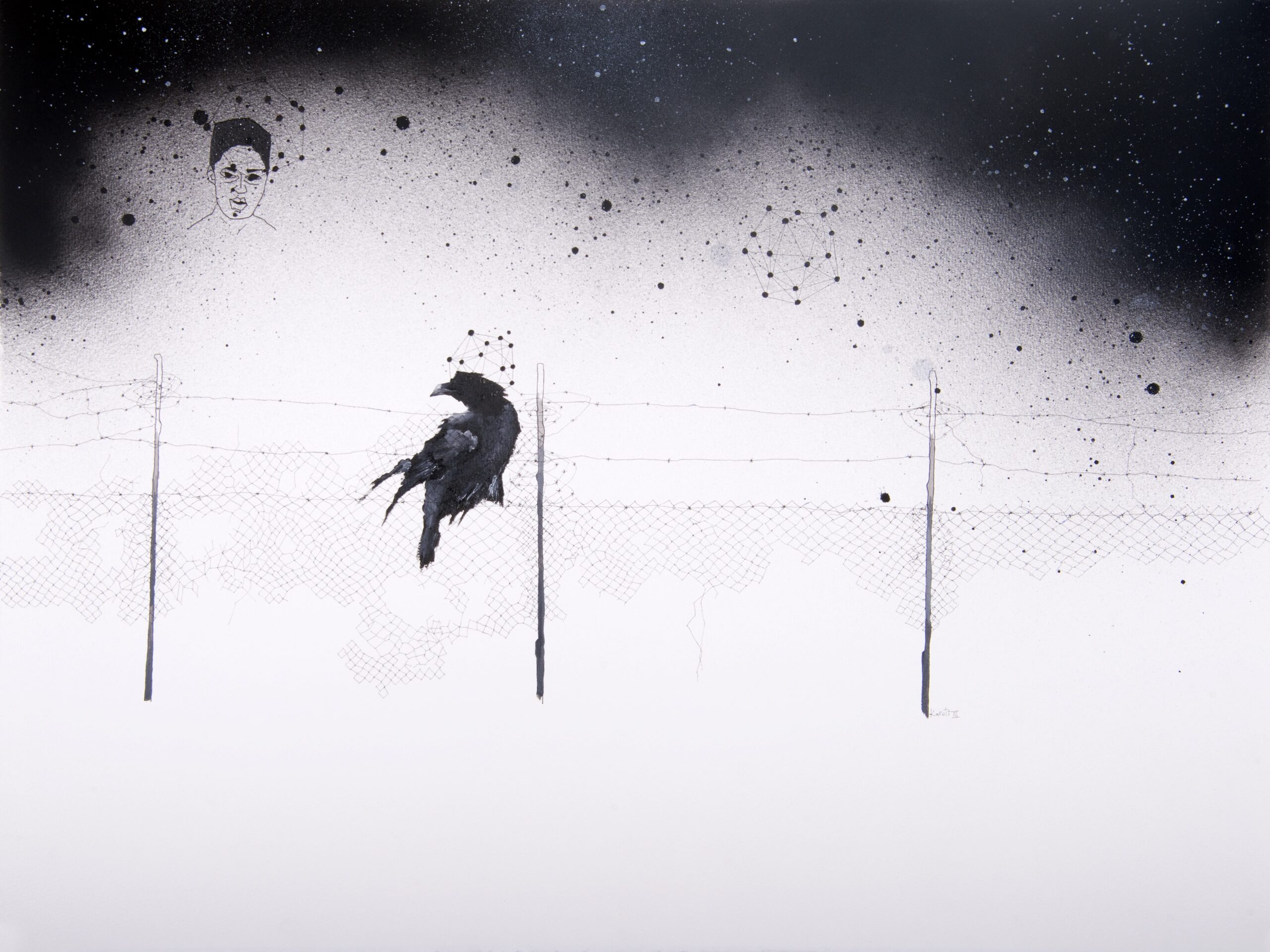 Jackie Karuti, Untitled from the series There Are Worlds Out There They Never Told You About, 2016. Drawing. Courtesy of the artist

NM: The watchtower and the fence are centrally—and perhaps even intimidatingly— located within the exhibition space. As some of the most banal techniques of surveillance and restriction, respectively, would it be correct to say that your work, even as it creates and foregrounds the galactic worlds you are inviting us to imagine, is at the same time very much located in a familiar everydayness?

JK: That would be correct. While the work started out as a fictional story that features a murder of crows, a wandering Black man, and sightings of watchtowers and fences, it’s quite clear that the work also hints at migration, displacement, and the idea of home and what that means. All these are issues we talk about on a daily basis in the ‘real’ world. At the exhibition opening, the last minute decision to have a chalk drawing on the floor resembling that of a dead body was triggered very much by recent happenings in America of two Black men gunned down by police just a few days before the opening. Having people step on ‘him’ and consequently erase his body as the evening went on was a powerful if not terribly sad statement.

NM: With current debates around protecting borders, Trumpmania or even the imminent closure of the Dadaab Refugee Camp, do you see this body of work as part of an ongoing larger conversation that seeks to commit to the important labor of imagination that perhaps makes other worlds possible? Do you think these exercises of imagination might perhaps lead us somewhere other than where we are in both time and space, in fact into other time-spaces?

JK: Yes to the first question. To think that somebody once imagined the world we live in today is quite terrifying and powerful really, but eish, what power! Every time I have that thought my mind literally expands. I like how you refer to them as exercises of imagination. It means the more we indulge our minds with these thoughts, the better and stronger the outcome and the more likely we are to create and expand worlds. Dreamers need a place to escape to after all and these worlds act as safe spaces. I think we already exist in these worlds anyway. Whether you’re looking at it geographically or metaphysically.

NM: When someone walks into this exhibition, what do you most hope they’d see or think?

JK: Even before the seeing or thinking, I would hope first that they leave logic at the door… and not come back for it ever.

Jackie Karuti is based at the Kuona Art Centre in Nairobi. Her recent exhibitions include There Are Worlds Out There They Never Told You About, Goethe Institute, Nairobi (2016) and Labyrinth, Kuona Trust, Nairobi (2015). Karuti has previously been awarded a Young Art Fund Award by YAA, Amsterdam, and the Moving Africa Travel Grant by the Goethe Institute, Nairobi. She has also worked as an artist in Residence in Kampala, Uganda; Johannesburg, South Africa; and Lagos, Nigeria.

Neo Musangi is a failed artist who lives and plays in Nairobi. They are a writer of things including poetry, academic research, and sarcastic ranting. They often blog on www.feministloft.com and complain at @sinoxolomusangi on twitter.