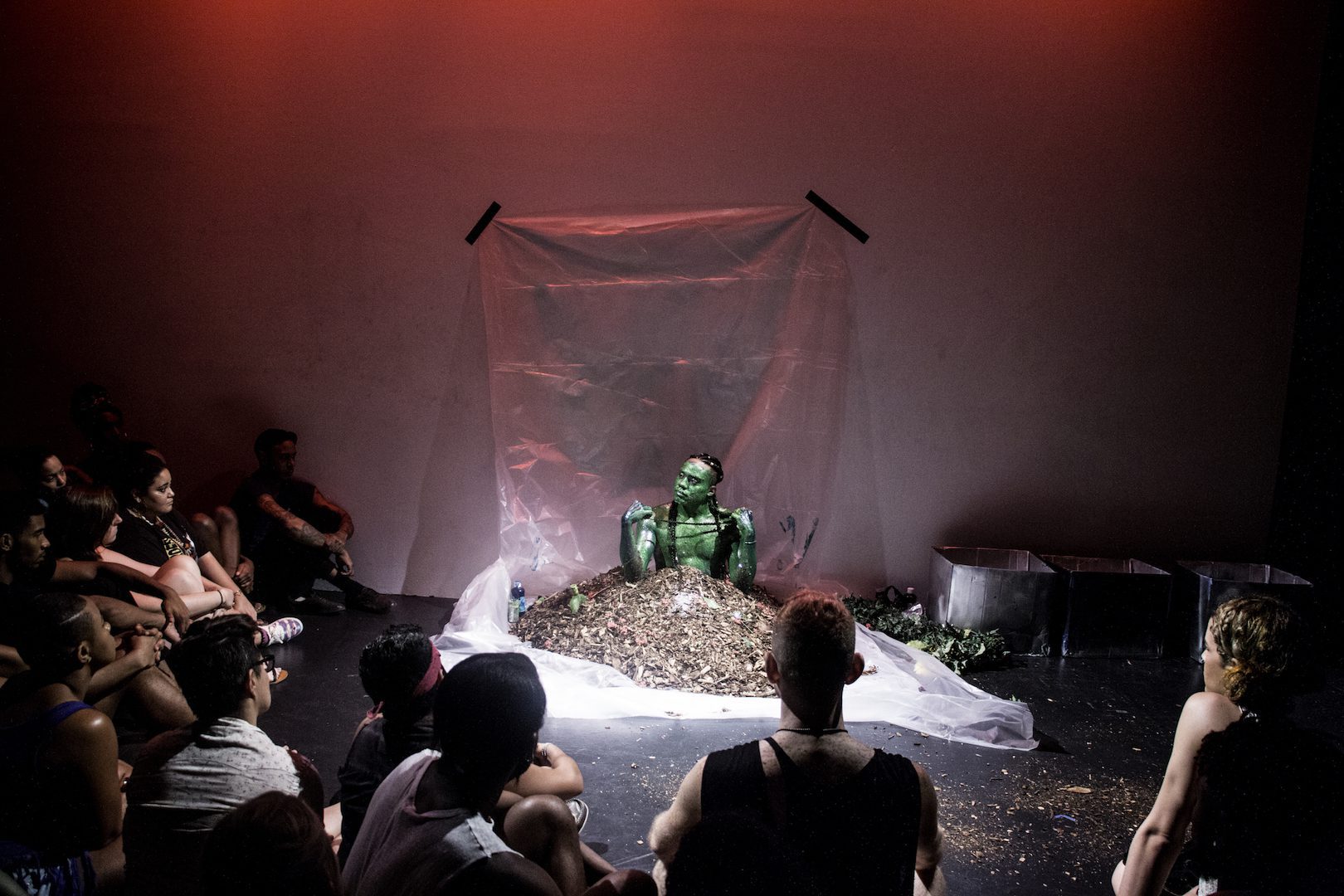 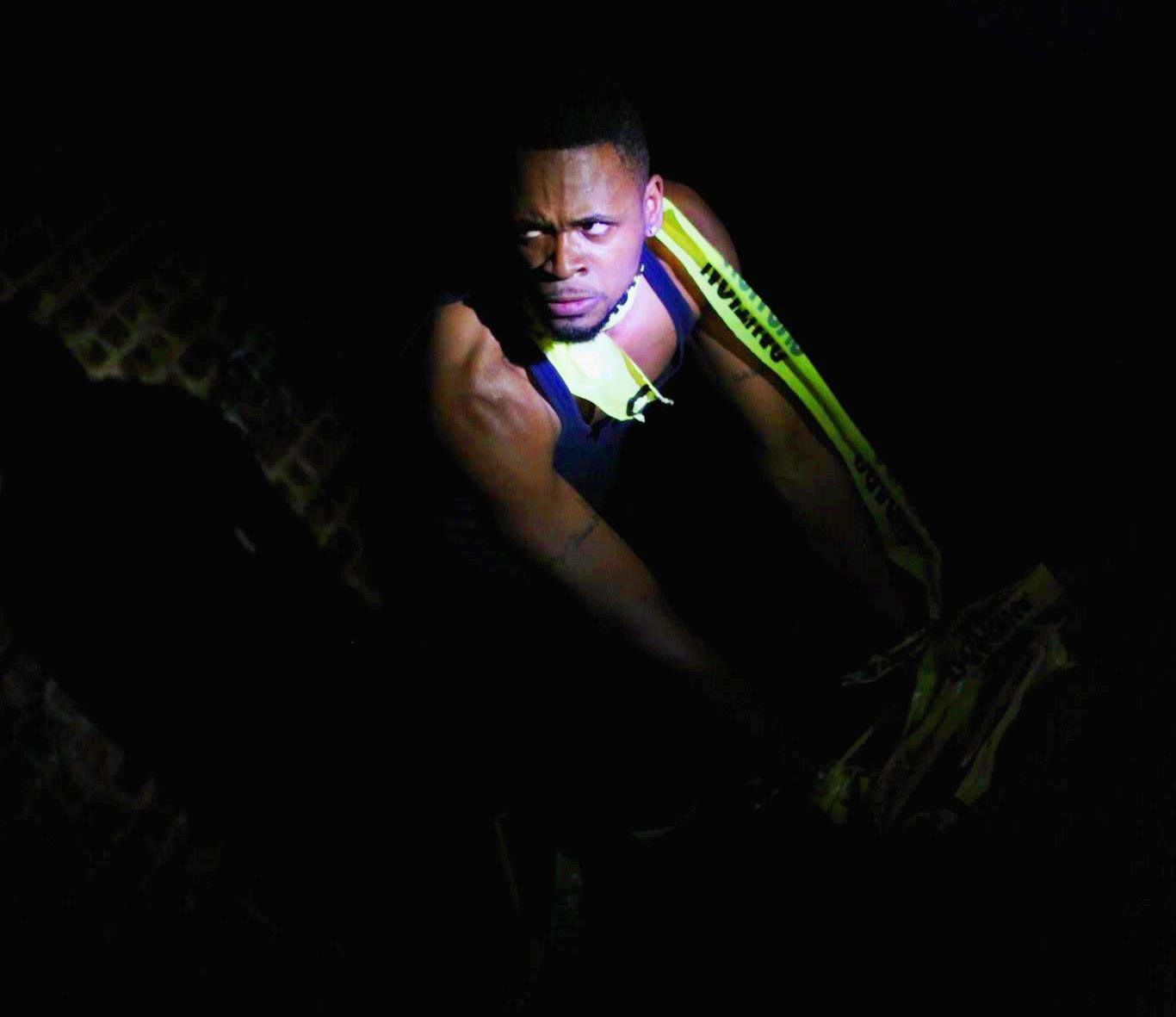 It Is Necessary to Be Able to Dream…

In a round-table conversation with our author Magnus Rosengarten, three emerging performance artists from NYC talk about their work, identity and about Blackness in America.

While protestors, activists and organizers took to streets and public spaces all over the US this summer, to protest the killings of Black men and women in various cities, the question of what role art can play in such cruel times becomes pressing.

Magnus Rosengarten: Do you make a difference between your personal life and your practice?

Kiyan Williams: Exactly, what’s the boundary? I think performance is a very useful way to understand power and identity. And I am interested in the vernacular, the everyday as a point of departure, of investigation through my practice.

MR: What about you, Taja and Stevie?

Taja Lindley: I see myself as a medium, as a channel, a facilitator of energy. So, when I am on stage, my body is literally a vessel for information that is coming through me, but isn’t necessarily of me. I do performance art because it requires me to confront things about myself I wouldn’t, if I wasn’t an artist.

Stevie Walker-Webb: My practice gives me a way to process my feelings, because words often fall really short. It gives me a place to re-live traumatic things that I don’t want to confront in my everyday life. That is a very positive thing, but at times also a sadomasochistic one. I get some kind of ecstasy or release from delving into my dark history, the history that shaped me even before I was born. I use performance to work out those demons.

MR: How have you been dealing with the traumatic incidents of the past months?

KW: It is a continuation of Black pain and suffering, when the state basically shows you, we will kill you and there is nothing you can do about it. What is the difference between white people gathering in Jim Crow South, attending public lynchings, and groups today, watching videos of Black people being killed? So, this isn’t really new. We have all the evidence, documents of how the state has persecuted and killed Black people. It has always been a part of American culture.

MR: Do you feel a special responsibility as artists?

TL: This brings up two questions for me. Do I, as an artist, even have to engage with conflicts that are present in the world of today? And if so, what can I do and how? First of all, I don’t owe anybody anything! I think that is the issue around “Black art”. Addressing what is going on is important but our pleasure and our joy are also important. The fact that we are Black and creating is inherently political, especially when our labor is seen as something that doesn’t belong to us or is something outside of ourselves. For me as Taja Lindley, I feel compelled to talk about what is going on in the world because this is how I am processing, through my creative practice. I create healing spaces through my performance. So, if we take on what is happening in the world – any artist really – we have a responsibility to move through it with care.

SWW: I think we have a responsibility more so now than ever. I am moving away from just being a Black performing artist and I am moving closer to an artist who deals with issues of poverty. “Race” is a hot issue in this country, which is why Trump is getting all the media attention. But I think we also have to address the issue of class more. When we really start talking about this, it will unite the majority. It will unite the people that are not the 1-2%. One of the reasons why they killed Dr. King was because he shifted his politics towards worker and labor unions and started to look at how poverty was affecting communities of color. We are not going to be able to change how privileged white people think. “Race” is going to be “race”. We have the ability to get rid of poverty in this country, though. I am really beginning to perform around this idea: How does class enable white supremacy to exist?

KW: A part of me just wants to say, Black artists ain’t gotta do shit. There shouldn’t be any limitation put on us. But as a Black artist, I feel a responsibility for the times we live in and for the preservation of my people. Recently, I’ve been contemplating a lot about the role of the artist. I would say I hold a mirror up to reveal and reflect and to give language, shape, and texture to my surroundings, also to the social, political and historical moment. But most of all, to reveal what a beloved Black queer future could look like. It is really important and necessary to be able to dream. This is part of my creative practice, my ancestral inheritance. This is what Black femmes have been doing since time immemorial.

MR: Taja, inspired by Erykah Badu’s “Bag Lady,” you have been working around issues of release and letting go of things. Where has this concept taken you?

TL: Well, the “Bag Lady” is now actually making a case for why it is important to hold on to memory, understanding where we come from, Sankofa! There is a line in my piece where she says you can’t be daughter and be gay. How many people had to negotiate their sexuality and their gender for their family? We use erasure, amnesia, forgetting as a way of not dealing with what is going on. How many people have to be killed before we remember that this is a systemic issue? This is rooted in the history of colonization, slavery, genocide, and capitalism. People need to know the “Bag Lady”. She says, look, all the shit you are trying to forget is right here. Stop polluting this place. Pick up your shit, carry it and transform things. She is all about remixing and recycling. People of the African Diaspora have done that forever. We have turned Christianity into something that is spiritual for us, Catholicism and Santeria, the word nigger, so many things that we have transformed to have different meanings for us. In that spirit and tradition, I am remixing and transforming protest, grief and rage into a world where our lives matter.

MR: Stevie, you said earlier, that your practice is currently shifting more towards questions of class.

SWW: I am working on a performance that deals with gentrification in relation to the Great Migration at the beginning of the 20th century. I came across this Black bishop who preached vehemently against it. He called it the Great Immigration because he felt, if Blacks did not stay in the South and fought for their right to be there, they would be running forever. He was ahead of his time. Today we live in New York City and I am doing this piece around gentrification where so many Black people are violently forced out of their neighborhoods. I feel like a Black man or person from the South, I have a very strong connection to America. I feel like Langston Hughes’ I too sing America. It is my country. I was raised by my grandmother, who is 94 and worked as a sharecropper, which is slavery by another name. This woman created the infrastructure, the capital of America. Black America is America to me. I know many people think we should leave. But where should we go? This is home.

MR: Kiyan, your current approach explores your identity as a Black femme. Can you tell us a little bit about it?

KW: A lot of my practice deals with inter-generational conflict and trauma. Healing plays an integral part as well. My piece “Unearthing” started when I began to grow into my identity as a Black femme and to exist in public spaces and in histories and lineages that inform my identity. I also “unearth” the legacies of Black femme resistances. I want to put all of this into the context of the larger global Afro-diasporic cultures of rebellion and revolution.

MR: So, what do you all envision your performance practice to grow into one day?

KW: At this point I would like to have an ensemble, a performance troupe. This is where true collectivism lies. I want to share my practice with more Black queer and trans people.

TL: I am still working on my evolution. So, I am more than a reaction to my circumstances. I know I want to touch a lot of people. Recently, I went and saw Beyonce in concert in Philadelphia. And I was like, WOW! She put thought into everything form start to finish. And I thought to myself: I want to be that powerful.

SWW: By day I am a political organizer, a social worker. I counsel kids who have experienced all types of abuse. I myself experienced that as a child. It was connected to the poverty of my family, and that trauma lives in your body. There is something about performance art that is rehabilitative and therapeutic and allows me to release that. When I am listening to these teenagers who are dealing with a lot of the conflicts I was dealing with as a child, it is triggering me to be my brightest, most giving, most loving self. I’m exploring how performance can help me with that.