Viewing love as a priority in Black lives is a rather complex maneuver because it compels us to question our very emotions. We will likely encounter serious emotional barriers in terms of what we mean by strength, sharing or hiding feelings, the need for affection – often at odds with the exigencies of day-to-day survival – and, finally, the choices and desires that ultimately make us who we are.

Racism and feelings of supremacy among whites did not evaporate once slavery was abolished, and the lingering legacy of slavery continues to be passed on from generation to generation in terms of how we love. According to bell hooks, the Black feminist writer from the United States, “we think we’ll jeopardize our survival if we let ourselves go and yield to our emotions.” That is what we learned from a slave system: to dismantle our affective ties. We were forced to believe that we only have control over our lives when we repress our emotions or pay little or no attention to our families, not giving them any affection, or when we teach our kids and siblings not to cry when they witness racism or discrimination. When affection is considered to be as important as survival and the fight against racism, we come to realize that oppression and forms of domination have compromised the very existence of Black people. When racism impacts emotional health and feelings, it leaves permanent marks and weakens us to the point that we are unable to fight for who we are.

As a symbolic field of imagined sociabilities, art opens a space for possibilities and experimentation with other tangible realities. Accordingly, many artists have explored issues related to emotional life and its interplay with society, especially emotions and identities that depart from the norm. In this context, we as researchers at Cia: Os Crespos de Teatro e Intervenção completed an audiovisual survey of stagecraft (2011–2015) that delves into the emotional lives of Black women and men, examining how slavery impacts on our ways of loving. Entitled Dos Desmanches aos Sonhos: Poética em Legítima Defesa (From Wrecks to Dreams: Poetry as Self-Defense), the project, conceived under the City of São Paulo’s theater funding program Programa Municipal de Fomento ao Teatro, involved research, production, and a five-show tour. In an attempt to create poetry that transcends this boundary, we have focused on our experience as an “encounter” in order to understand emotional contexts and diverse identities. Field research spanned bars, porn movie theaters, squares, diversity centers, offices, prisons, households, and a myriad of other physical spaces in São Paulo, where researchers engaged with men, transvestites, cross-dressers, drag queens, and transgender people of varying ages, though contact was predominantly with younger individuals. Based on the listening experience, Os Crespos created a show that assembled the interviews alongside the mythical and transgressive figure of Madame Satã (Madam Satan, 1900–1976), a Pernambucan transvestite who spent part of her life in Rio de Janeiro. Cartas à Madame Satã Ou Me Desespero Sem Notícias Suas (Letters to Madame Satã, or, Hopeless Growing Desperate without Hearing from You) sets out to create a discourse in favor of love, while also discussing themes such as emotional life. The work also crafts a poetic statement in which love as a public act is considered to be a fight for one’s identity.

From the beginning, Cia Os Crespos have treated performance as a space for the body’s intervention and the audience’s relationship with the body. In this sense, the performance of certain artists has laid bare their experience as witness to an emotional life hemmed in by taboos. This body/witness not only represents the realm of potential affect, but also serves as a statement, a claim, and a debate. With more than 14,000 Facebook likes, the Tumblr called Bicha Nagô, created to expose previously hush-hush situations, shares everyday experiences as a safe space for discussing themes of sexuality and race. Using social networking, performer Ézio Rosa has branched out into artistic events organized to discuss the subject.

Rico Dalasam, hailing from Taboão da Serra in the state of São Paulo, has gained acclaim in various countries and recently released a new album, Orunga (2016). Emerging from legendary rap competitions regularly held at the Santa Cruz metro station in São Paulo, the rapper continues to weave groundbreaking narratives within hip hop culture. Embracing the principle that such culture was popularized for expressing unfiltered truth, Dalasam decided to talk about being gay, how he loves, how he sees himself within society, and, in turn, how society views him. 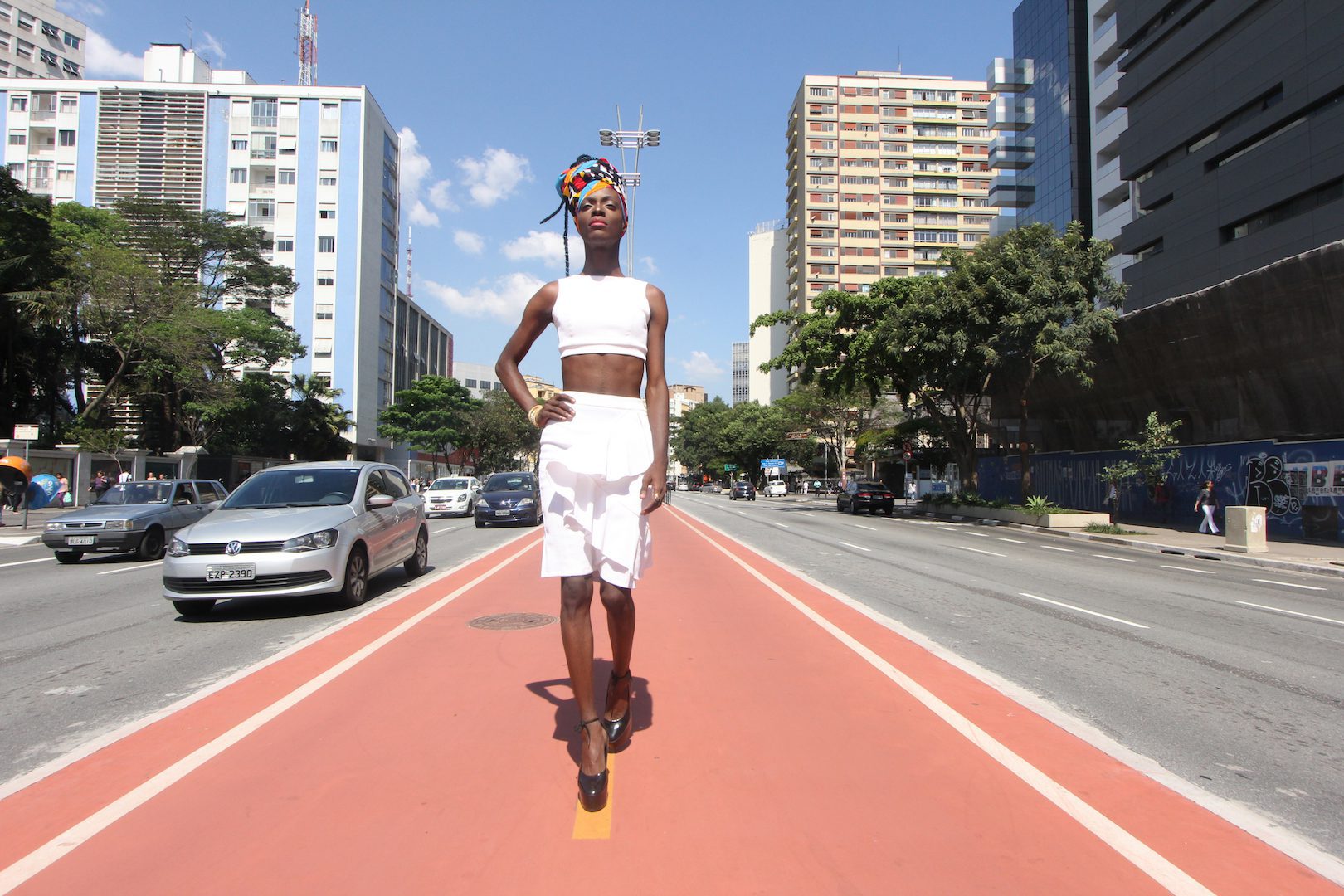 In his experiment against homophobia entitled Meninos Também Amam – Um poema/manifesto cênico (Boys Love Too: An On-Stage Poem/Manifesto), Inacaba Cia.’s Rafael Guerche has boldly attempted to build drama and staging that can open up a space for affection among equals. In the creative milieu of young theater students, his initiative is poetically striking, showing nude figures making love in public, unleashing love and emotion. The actor, performer and costume designer Robson Rozza – as he calls himself – was once an introverted, introspective child. Nevertheless, the lanky boy has transformed himself into a restless, fearless presence who won over the world. Robson is the artist behind the persona Aretha Sadick Drag Queen, who is recognized not only for elaborate artistic performances but also for not shying away from speaking out about social insertion and civil rights. In a drama class at the Martins Pena School, the artist and his classmates formed a research and language collective in which he assumed the acting role. His interpretation of a monologue inspired by the feminine universe explored in the songs of Brazil’s famed singer-songwriter Chico Buarque drew the attention of a friend who urged him to wear the outfit created by the renowned Paranaense designer Henrique Filho for the 22nd edition of Miss Gay Rio de Janeiro, which he won. “It was totally unexpected and unplanned… The contest won me a ‘pass,’ and I could have seized on more opportunities from that. But I wanted to distance myself from that world. I was very young,” he has said. He retreated to his studies in fashion (which had given way to theater) and began working in art education. He was an artist- in-residence at the London 2012 Summer Olympics, where he had the opportunity to explore gay London nightlife and experience other contexts and aspects in the world of cross-dressing, transvestites, and drag queens. Just after returning to Brazil, a friend who was organizing Rebola – a touring music festival – invited the artist to perform. “Aretha was dormant and no longer relevant then, but she made a comeback at that festival and came back onto the scene.” Against all odds and – literally – not dropping the ball, Robson and Aretha remain one, sharing the same body and ideas. The artist currently participates in Drag-se, a collective of young Rio artists with a YouTube channel that takes a weekly, behind-the-scenes glimpse into the world of drag artists, raising awareness and urging the need for visibility and dialogue related to multiple identities. “I’m trying to merge my knowledge of the performing arts, costumes, fashion design, and discussions on sexuality and gender. Like I said, I’m now Aretha Sadick the Drag Queen, but first and foremost I’m Robson Rozza, an artist.”

Lucélia Sergio is an actress and founding member of Cia Os Crespos.

Sidney Santiago Kuanza is an actor and founding member of the group Cia Os Crespos – theater and urban intervention.