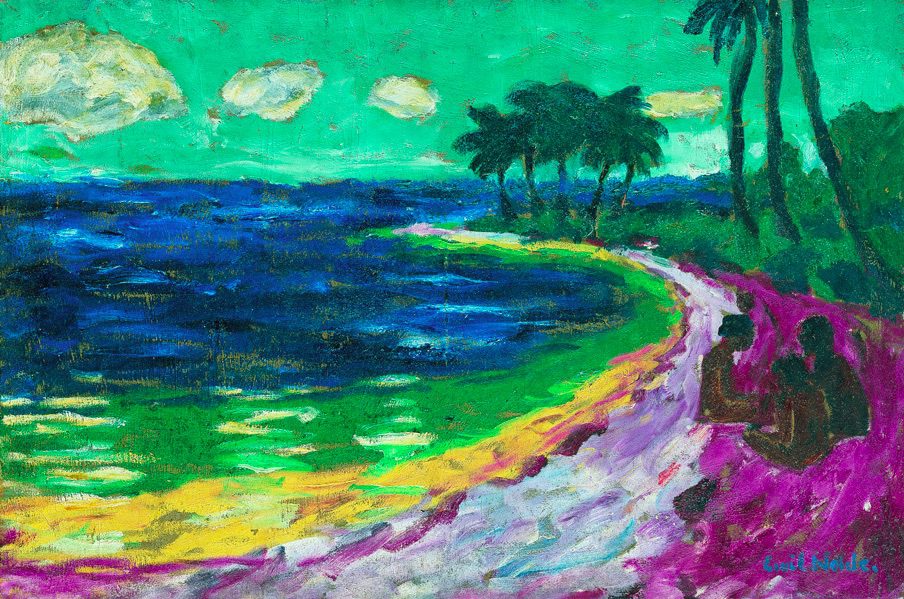 The Brücke artists lived and worked during a period when Imperial Germany was one of the largest colonial powers in Europe. The exhibition Whose Expression? The Brücke Artists and the Colonial Context examines their works against this historical background.

First and foremost, the exhibition addresses the tension between inspiration and appropriation that characterises the work of Erich Heckel, Ernst Ludwig Kirchner, Emil Nolde, Max Pechstein and Karl Schmidt-Rottluff. On the one hand, the artists identified with the imagined world of the supposedly “natural” cultures of the global South as an antithesis to bourgeois society and sought to overcome the Eurocentrism of their time. On the other hand, they utilised stylistic elements of works from other cultures as inspiration for their art without reflecting on the contexts of the works’ creation, colonial power structures, or their own racist world view.

Numerous sketches and paintings attest to the fact that the artists in the ethnological museums in Dresden and Berlin engaged intensively with works from the colonial South. They repeatedly appropriated elements of the Benin bronzes, for example, as well as the Palau beams. Furthermore, they visited theatres, vaudevilles, circuses and racist colonial exhibitions where people were displayed like objects. Some of these colonised people became popular models for the artists.

The exhibition devotes itself to lives of the subjects of these portraits, as well as the histories of the works from the colonial context. For example, the famous leopard stool from Kirchner’s studio, long thought to be a work by the artist, will be shown for the first time with its significance as a prestige object of Cameroon’s courtly elites and as a testimony to Cameroonian-German colonial history. Another focus will be on the individuals that the Brücke artists exoticised as anonymous “others”.

The Brücke members’ encounters with people and works from the colonial context took place predominantly in Germany, for only Nolde and Pechstein travelled to the German colonial territories of Papua New Guinea and Palau. With the aid of photographs, documents such as letters and diaries, and sketches and watercolours created in situ, the exhibition endeavours to trace these journeys. It also addresses the artists’ disillusionment when they did not encounter the fantastic paradise of the European imagination on their travels. While travel photographs provide very clear documentation of the colonial occupation, Pechstein and Nolde omitted it from their works.

This exhibition marks the beginning of the Brücke-Museum’s confrontation of its colonial legacy. The holdings of the Karl und Emy Schmidt-Rottluff Stiftung still contain around 100 works from the artist’s estate that originally came from 20 different parts of the world. These will be digitised this year and shared with the public in the open access database Wiki Commons. At the same time as this exhibition, contemporary artists will reflect on the collection in the exhibition Transition Exhibition at the Kunsthaus Dahlem. The preparation of the exhibition and its public programme was accompanied by an internal sensitivity training course for the museum’s team titled Reflections: Colonial Legacies at the Brücke-Museum.
The exhibition catalogue Kirchner and Nolde. Expressionism. Colonialism with contributions by Dorthe Aagesen, Beatrice von Bormann, H. Glenn Penny, Aya Soika, Rebekka Habermas, Natasha A. Kelly, and others was published by Hirmer Verlag and costs 32,90€ (museum edition).

With the kind support of the Karl and Emy Schmidt-Rottluff Stiftung.

The digitisation project is funded by the Senate Department for Culture and Europe. The project partner is the Forschungs- und Kompetenzzentrum Digitalisierung Berlin (digiS).

The pilot project Reflections: Colonial Legacies at the Brücke-Museum is supported by the State of Berlin’s Contemporary History and Memory Culture project fund.

The project Various Answers is developed as part of “dive in. Programme for Digital Interactions” of the Kulturstiftung des Bundes (German Federal Cultural Foundation) is funded by the Federal Government Commissioner for Culture and the Media (BKM) through the NEUSTART KULTUR programme.