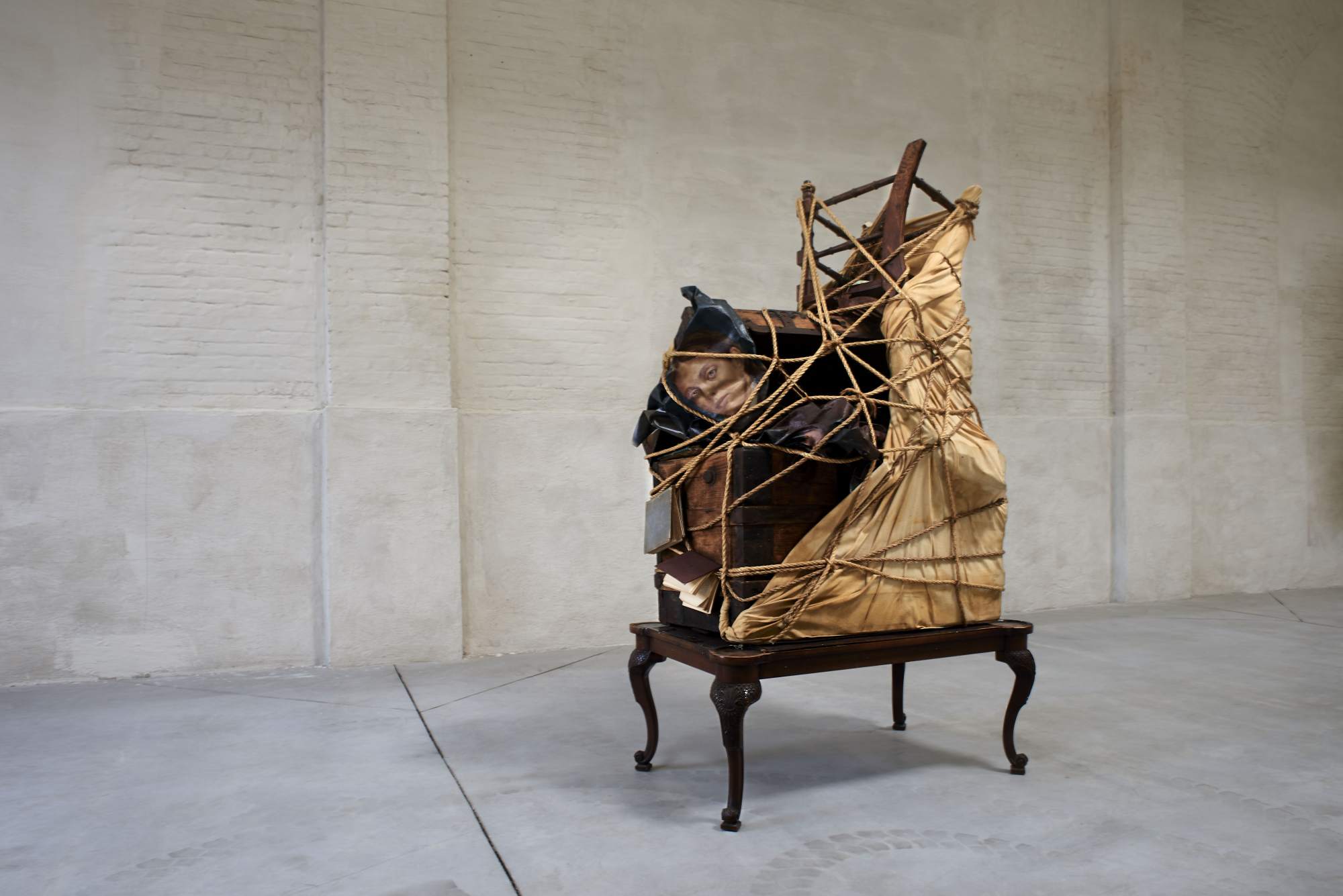 Installation view of The Vesper Project by Titus Kaphar at The Warehouse. Organized by Maruani Mercier Gallery, 2019. Courtesy the gallery.
1/1
1/1

Installation view of The Vesper Project by Titus Kaphar at The Warehouse. Organized by Maruani Mercier Gallery, 2019. Courtesy the gallery.

“The Vesper Project” is Titus Kaphar’s most exhibited body of work, and the most ambitious installations of his artistic practice, touring throughout the United States from 2013-2017. The exhibition is on view from 18 May until 28 September at The Warehouse in Zaventem, Belgium.

While staring at a painting by artist Titus Kaphar at the Yale Art Gallery, a man named Benjamin Vesper experienced a psychotic break and attacked one of the figures in the painting. Vesper was arrested and subsequently admitted to the Connecticut Valley Hospital where his full identity and background remained a mystery. During the course of his sessions with a psychologist, Vesper began to reveal details about himself and his family’s troubled history. Vesper remained secretive about the letters and documents he wrote to Kaphar. In 2008, he wandered off the hospital grounds, and was found squatting in a 19th century house that he insisted belonged to his family. In fact, the original Vesper home had burned down in the early 1900s. It seems Mr. Vesper needed such a space to return to, in order to engage with his own memory. The Vesper project exhibition includes art works inspired by the patient’s frequent correspondence with Kaphar. From this verbal and pictorial dialogue emerges the story of a 19th century family who are able to “pass” as a white family in New England although their mixed heritage makes them “Negro” in the eyes of the law.

With the generous support of the Burger Collection, the Vesper Project was among Kaphar’s most exhibited body of work, and the most ambitious installations of his artistic practice. The Vesper Project toured throughout the United States from 2013-2017 when, after much consideration, Kaphar decided to decommission the installation. Kaphar says of the years long experience, that “The Vespers have come to life through the travel and the sharing of their family story. Exhibition after exhibition, viewers have come to me with stories of their own mental disruptions, loved ones lost and the obsessions that they found to bring them out of their sorrow. I have saved remnants from the installation, and am giving them second lives by upcycling elements into new works.”