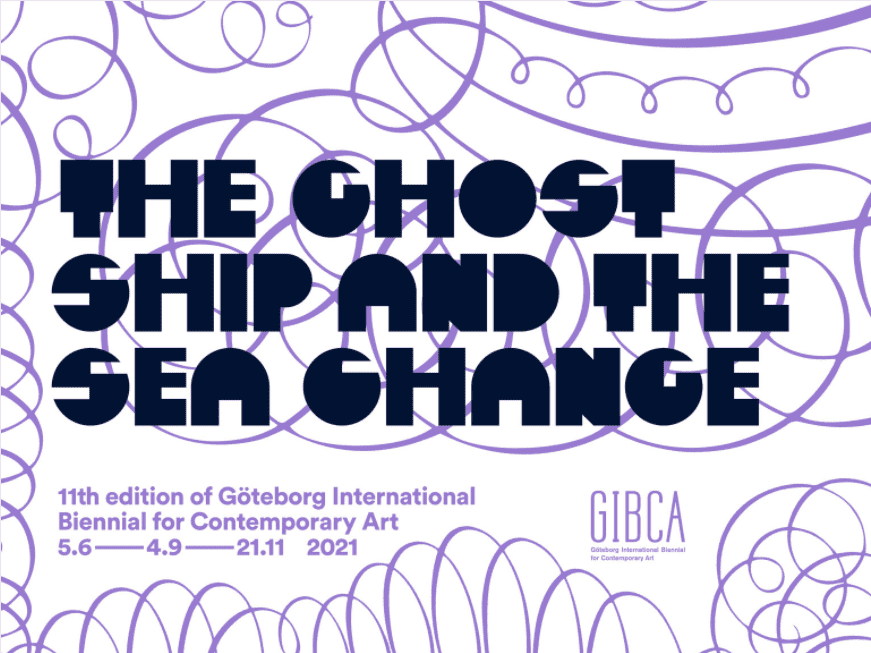 The Ghost Ship and the Sea Change : 11th Edition of Göteborg International Biennial for Contemporary Art

The 11th edition of the Göteborg International Biennial for Contemporary Art, The Ghost Ship and the Sea Change, coincides with the 400-year anniversary of the founding of the city of Gothenburg. In response to the occasion, this year’s biennial will have an extended format and open in two stages, transforming along the way.

In an endeavor to reconsider the embedded temporality of biennials and test new forms of commitment to topicality, artists, and audiences, the biennial has collaborated with one curator for two consecutive editions. The Ghost Ship and the Sea Change is the result of a three-year-long collaboration with curator Lisa Rosendahl and a continuation of the biennial edition in 2019, Part of the Labyrinth.

The Ghost Ship and the Sea Change relates to the historical layers of the city, asking how different ways of narrating its past might affect its future. Placed at the intersection between the historical and the fictive, the biennial explores the potential of artistic practice as a method of critical historiography and change.

The so called “Franska Tomten,” a plot of land in the city’s harbor that was exchanged for the Caribbean island of Saint Barthélemy as part of an 18th-century trade deal between Sweden and France, is used as the narrative starting point of the biennial. How might it change the way we think about Gothenburg if we look at the city from the perspective of this particular plot of land?

The seemingly symmetrical exchange of Franska Tomten and Saint Barthélemy hides a set of deeply asymmetrical relations. Until 1848, the economic activities of the Swedish administration of the island were chiefly concerned with the transatlantic slave trade. Reflecting on Franska Tomten’s colonial history through the buildings and activities that occupy the site today—a court of law situated in a former shipping palace, a casino, and a museum of migration housed in the historical harbor’s customs house (the museum moved out of the premises in March 2021)—the past is made visible as an ongoing present.

The narrative plot implied by the interrelated flows of goods, bodies, capital, and ideology connected to the site spans centuries and geographies: just as the writing of law is historically bound up with regulations of international trade, the global circulation of capital is directly connected to routes of migration. Proposing to speak from Franska Tomten rather than about it, the biennial traces this plot outwardly from Gothenburg Harbor to where it meets other places, voices, and histories as represented by the exhibited artworks. Taking the form of a polyvocal and multi-sited historiography, it suggests that a city founded on transnational relationships can only become legible through looking at other places.

The double title of The Ghost Ship and the Sea Change alludes to the necessity of both honoring the ghosts and finding ways to move beyond them. In Part One, the exhibition architecture at Röda Sten Konsthall references the West India–bound frigate Havmanden, which was shipwrecked outside Gothenburg in 1638. The exhibition is staged as a metaphorical replica of this ship, representing how the past continues to frame the present, but also how the ruins of history can be repurposed. Starting in September, additional artworks will be added, reshaping the initial exhibition as well as extending the biennial across further venues and public spaces throughout the city.

As a long-term commitment to site, between 2019 and 2021 the biennial commissioned a series of sound works informed by histories of past and present Gothenburg. The works are released throughout the year and are available in the GIBCA app. Together with these works, a series of public programs will be made available online during the 22 weeks of the biennial.

This first part of the biennial can be experienced by reserving a time for your visit in accordance with current health and safety guidelines.

The inauguration program will be held online on the biennial’s website and social media channels on June 5th and September 4th.

Starting in September, all biennial venues will be open. Information on professional previews will be released in August.