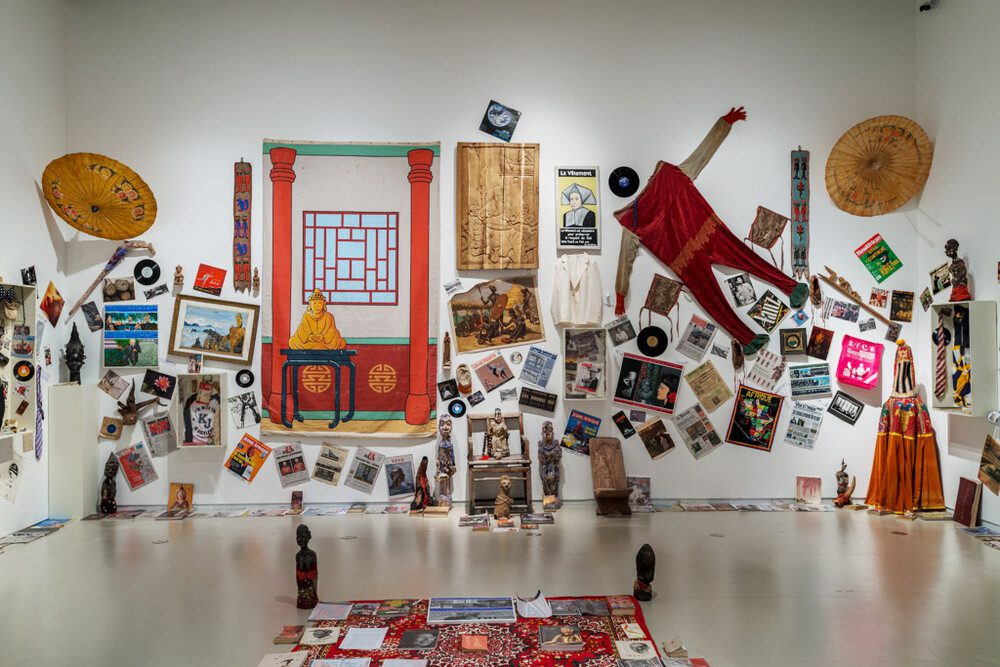 Georges Adéagbo’s artistic oeuvre is a form of urban archaeology investigating on the visual remnants of his own biography as well as its colonial-historical and global interweaving. His creative practice is based on collecting, arranging and juxtaposing of objet trouvés of his daily journeys throughout European and African worlds: Discarded items, lost clutter, found objects as books, photos, fabrics, own texts and sculptures, masks and paintings commissioned at local artists in Benin are transformed into extensive and location-based assemblages. He ensues a syncretic visual language, allowing pledges of different times, spaces ad cultures to equally coexist dissolving a sovereign perspective. Adéagbo decolonizes in a subtle way by questioning the ubiquity of Western rationalism and resisting the superficial classification of events and things by a multiplicity of narrative threads. In approaching the complexity of seeing, perception and understanding of our social environment, Adéagbo is a pioneer of postcolonial discourse in Hamburg. Examples as the lately triggered discussion about the future of the city’s Bismarck-monument make clear that we have to give voice and visibility to historically marginalized positions of the local Black and POC communities in order to guarantee an adequate interaction with our colonial legacy.

Only the complexity of perspectives–confronting familiar and other people’s points of views–can generate new forms of interconnection and enable social change and collective togetherness. With this idea in mind, the exhibition »Talking Mirrors« at M.Bassy is amended by three further, divergent artistic positions from Adéagbo’s home country Benin to enter into a dialogue about the visibility and invisibility of (post)colonial reality in public urban space. Thus, his installative assemblage conceived for the main room at M.Bassy is joined by photo and video works of the contemporary artists and film makers Eliane Aïsso, Ishola Akpo and Thierry Oussou.

Georges Adéagbo (*1942 in Benin, then Dahomey) is a conceptual artist who has been developing his own style of using found objects since the early 1970s in Cotonou, Benin. When out on walks he gathers items that have been lost or thrown away, and incorporates them into his installations. Adéagbo enriches his palette with acquired objects and works he has commissioned himself – sculptures, masks, pictures and text panels. As a result, episodes from his personal past interface with unusual interpretations of so-called objective historical scholarship, mainstream pop culture is juxtaposed with canonized high culture, and the banal confronts the profound in his works. Adéagbo avoids overly obvious interpretations of his work: ambiguity and entrapment are integral to his strategy of provocation.

The artist also deliberately avoids those elements and facets expected of “African” artists – in some cases even presenting these expectations in a satirical light. Adéagbo’s works key into the process of coming to terms with the colonial era, explore the imperialistic claims of Western powers in mainland Africa, and pose questions about traces of colonialism still visible in European cities. From his perspective as an African ethnologist, Adéagbo studies the customs of each place at which he exhibits, and casts these as glaring clichés– a parallel to the way his own culture is often misrepresented. Adéagbo’s works can be found in important collections, for example: Centre Pompidou-Paris, Museum Ludwig Cologne, Philadelphia Museum of Art, The Whitworth Art Gallery, Manchester, Toyota City Museum, KIASMA Helsinki, Moderna Museum Stockholm and the Contemporary Art Collection of the Federal Republic of Germany.

Eliane Aïsso (*1989) is a visual artist of Benin working with different media as textiles, sculptures and photography. She also lives and works in France. She studied i.a. art history and archaeology participating since then in numerous international exhibitions, interdisciplinary artist residencies and workshops. She exhibited in Hamburg in 2020 as part of the show »Reversed Exploration« at Kunstklinik Eppendorf.

Ishola Akpo (*1983) is a photographer and multi-media artist living and working in Cononou. In 2013 he was honoured with the »Visa pour la creation« by the Institut Français in Paris and and accompanying exhibition at Institut Français in Cotonou. In 2014 he participated at the art fair »1:54« in Morocco. In 2015 the Musée du Quai Branly in Paris acquired his series of works »Les mariés de notre époque« for its collection. His oeuvre was also shown at Weltkulturen Museum Frankfurt, at »Fotonoviembre« on Tenerife, at »Nuit blanche de Port-au-Prince«, at »Lagosphotos Festival« and at »Afreaka Festival« in Brazil. He completed several artist residencies, i.a. at Montresso Foundation in Morocco and at Zinsou Foundation in Benin.

The artist Thierry Oussou (*1988) lives and works in Berlin. His artistic practice is a form of “social archaeology“ encompassing painting, drawing, video and installation works as well as performances. He investigates the relationships between contemporary art and ethnographic objects questioning authenticity, visibility and memory in regard of our cultural heritage, especially of his country of origin Benin. He participated at Berlin Biennale presenting a project engaging with the restitution of African artefacts, followed by a solo show at Tiwani Contemporary in London

The exhibition is organized and curated by Stephan Köhler / Kulturforum Süd-Nord e.V. in cooperation with M.Bassy e.V.