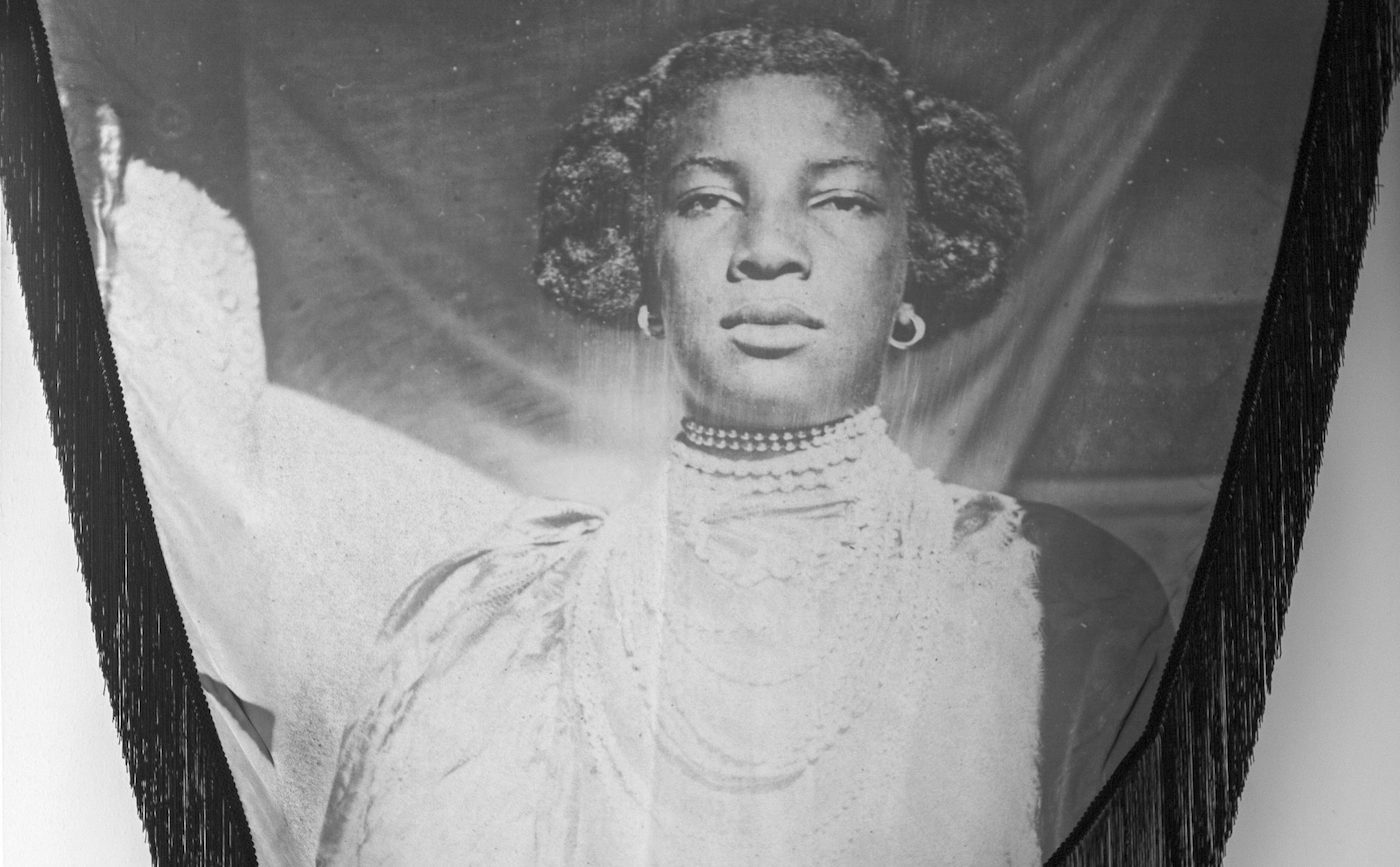 Shiraz Bayjoo deconstructs the material and visual languages of coloniality to articulate new critical strategies for decolonial affirmation. The artist’s research-based work, rooted in his Mauritian heritage, pursues a broad understanding of the Indian Ocean region, investigating its interconnectedness in resonance with notions such as Édouard Glissant’s ‘poetics of relation’ and Patrick Chamoiseau’s interpretation of creolité. These regional entanglements are addressed in recognition of how crucial the movement of peoples and resources among neighbouring islands such as Mauritius and Madagascar has been to the wealth of European empires, forming the key building block of what sociologist Aníbal Quijano defined as “coloniality of power”: “the forms of control of the subjectivity/intersubjectivity, of culture, and especially of knowledge, of the production of knowledge.”1

Knowledge production and transmission are the focus of Bayjoo’s first exhibition in France, Lo Sa La Ter Ruz. Translating to ‘On This Red Land’ in Mauritian creole, the title alludes to the red soil that gives Madagascar its byname of Great Red Island. Bayjoo engages with the region’s colonial history by conceiving an exhibition that is a homage to the communal strategies and genealogies of resistance that allowed communities, including the artist’s own ancestors, to stand in the face of European colonisation. Operating a détournement on colonial archival materials, the project generates a “disruptive poetics”2 that highlights stories of intergenerational and pluriversal resilience. Designed as a polyphony of artworks that resonate with one another to convey and honour the complex experience of the colonised, the exhibition unfolds Bayjoo’s multidimensional research and practice in which diverse mediums are employed as distinct strategies of thinking and making.
In the textile series San Vizyon, the artist expands his ongoing research on the symbolic use of fabrics and photography. He subverts their historical role as technologies of colonial propaganda, from naval sails and royal banners to exotic postcards and racialised ethnographic studies. Drawing on French colonial archives, the textiles here bring into presence powerful photographic encounters that unsettle the epistemic order of the archives they are sourced from and establish, as advocated by visual culture theorist Ariella Azoulay when discussing how to access photographic archives in ways that are not “inconsequential,” a “political interaction”3 with photographed subjects.

Overcoming a lack of historical and geographical proximity, Bayjoo brings the viewer into intimacy4 with the genealogies of knowledge transmission and resistance that ensured the survival of colonised communities. Among these, larger-than-life female figures establish their presence by opposing the fetishisation of the camera, defiantly returning the gaze and embodying what feminist scholar Elizabeth Grosz describes as “women’s capacities to move beyond what attempts to debilitate or contain them, to devise strategies, harnessing what they know about power, about their daily lives, their experiences, their positions.”5 Another composition presents a forest, honouring land as a space of freedom and self-determination; as Glissant eloquently clarifies, “territory is the basis for conquest. Territory requires that filiation be planted and legitimated. Territory is defined by its limits, and they must be expanded. A land henceforth has no limits. That is the reason it is worth defending against every form of alienation.”6 Similarly oppositional to alienation are the spiritual practices highlighted in the series, which are seen to inhabit the everyday and produce pluriversal forms of resistance through ordinary objects.

San Vizyon forms a “material index of resistance”7 that sheds light on networks of relation and meaning unaccounted for by the colonial narrative. It brings to the surface presences that are from the past but are not relegated to it: instead, they are to be seen and understood in their present-day significance. As the creole title of the artwork (“Without Vision”) suggests, through a material and conceptual manoeuvre, the hegemonic order of vision that preserves “constituent violence”8 in archives is here eradicated.
While San Vizyon implies, but does not illustrate, what lies behind the settlers’ camera, the Sambo sculptural series addresses such questions while further articulating the artist’s object-based critical thinking. Resting on Sapele, an African timber referencing traditional East African and western Indian Ocean hardwoods, offerings and symbols function as points of focus to fine-tune the material, spiritual, and social context that nourished the resilience celebrated by San Vizyon. Evoking the intimacy of spiritual altars, the Sambo series delineates a space in which to form new genealogies of Complementing the installation is a selection from the En Cours painting series, which draws from the archives of the Musée du Quai Branly. The historical photographs, wielding the settlers’ gaze and assigning subordinate and racialised identities to members of Malagasy society, are transfigured by Bayjoo’s process of material thinking. Avoiding an acritical reproduction of such charged imagery, and as if to address the dilemma raised by scholars such as Saidiya Hartman when asking how to “revisit the scene of subjection without replicating the grammar of violence,”10 Bayjoo incorporates the photographs into an artistic process in which layers, colours and matter modulate the focal points, atmospheres and inferences of the figures represented. Reversing the process that turned complex identities into archetypes, the resulting artworks defy the certainty of fixed racist categories.
Through a process of painting that applies material layers as lenses capable of adjusting one’s vision, the artist generates for his images a defiant and alternative archaeology.
memory and substitute hegemony with relationality, owning with owing.9

He unearths the sovereignty of representation that colonial archives have historically erased through their “order of perception” in which, as described by scholar Rolando Vázquez, “the spectator knows little about what […] lays outside the artifice.”11 The rhizomatic relations among paintings further illuminate the artist’s approach to interconnectedness as methodology and to research-through-making. Each becomes part of a broader network of meaning, forming a choral mosaic that resonates with San Vizyon’s textiles and sheds light on the impossibility of reducing Malagasy and Mauritian societies to homogenous identities.

Ceramics from the Coral Island series extend Bayjoo’s ongoing reflection on the symbolical value of objects. The small sculptural pieces, mimicking French ornate frames similar to those historically used to cherish portraits of loved ones, reproduce the endearing quality of bourgeois comfort and social status. On closer inspection, however, it is images of colonial violence that inhabit these charming decorative ornaments. Underneath their ceramic glazes, evoking earthy landscapes and volcanic soils, are crystallised images from the De Bry collection of voyages, a series of twenty- five volumes published in Frankfurt between 1590 and 1634 and collecting almost fifty accounts of colonial travel across India Occidentalis (present-day Americas) and India Orientalis (Africa and Asia). The ceramics become vessels of the double violence that colonisers perpetrated on living beings and ecologies in the Indian Ocean region. From settlers sitting on giant turtles to men trying to kill birds with clubs, the explorers’ naïve representations of exotic paradises are manipulated to expose the relentless exploitation of land and bodies that such stereotypical imagery enabled. Coral Island shapes a new narration, in which the colonial imaginary that continues to thrive today through seemingly innocent fantasies of paradise island vacations reveals its genocidal and ecocidal ferocity.
The tension between such ferocity and the anti-colonial struggle for sovereignty is the focal point of Searching for Libertalia, which entwines multiple historical narratives around Madagascar: the story of Captain Misson and his allegedly egalitarian pirate colony, the politics of the French East India Company’s slave trade, and the independentist movements of the 1940s against French occupation. Bringing together historical footage with moving image gathered by the artist, the artwork employs a three-fold visual strategy that mixes different temporalities to construct a diachronic narration in a synchronic visual space. Echoing the manipulations and multiple interpretations to which history-making is invariably subject, Searching for Libertalia sheds light on the shapeshifting and recurring challenges underlying the Malagasy struggle for decolonisation.

Lo Sa La Ter Ruz’s intellectual, affective, and sensorial entanglements defy the inexorability of the colonial past, resonating with Grosz’s invitation to exercise history not as “the recovery of the truth of bodies or lives in the past” but as “the engendering of new kinds of bodies and new kinds of lives,”12 so as to generate new communal understandings for the future. Bayjoo’s work articulates a material and visual resistance through which historically colonised/resilient subjects can re-exist in the present. In establishing intimate forms of connection to the past, the artist’s ongoing commitment to decolonial practices resonates intensely with Hartman’s radical, liberating, poetic process of overcoming the deterministic violence of the colonial archive:

I navigated the limits of evidence by invoking a series of speculative arguments that exploited the capacities of the subjunctive—the what might have been—and by inhabiting a figural or affective relation to the past rather than a causal or linear one. […] The space for our love, our care, and our dreams will have to be taken like everything else. 13 – Ilaria Conti (Curator)