The Lenbachhaus will present three important works by the US-American artist Senga Nengudi: The sculpture R.S.V.P. Reverie “D” (2014), the photographic triptych Performance Piece (1978), and the photographic series Ceremony for Freeway Fets (1978). These works will make their debut in Munich in an extensive exhibition devoted to Nengudi’s work opening at Lenbachhaus from September 2019.

For more than forty years, Senga Nengudi has shaped an oeuvre that inhabits a specific and unique location between sculpture, dance and theatrical performance. Before moving to Colorado Springs in 1988 where she lives until today, Nengudi spent close tofour decades in Los Angeles. In the 1960s and 1970s, Los Angeles was home to an African-American avant-garde with Nengudi as one of its pivotal figures. Her iconic sculptures, exhibited for the first time in 1976, are made from pantyhose combined with natural materials such as sand and stone. The artist herself describes these ostensibly abstract, yet suggestive biomorphic sculptures as “stationary performances.” As the title of the growing series—R.S.V.P., short for “Répondez, s’il vous plait” or “Please reply”—implies, these objects formulate an invitation and are occasionally activated during performances. R.S.V.P. Reverie “D” (2014), the sculpture the KiCo Collection now acquired for Lenbachhaus, is one of the most imposing current works in the R.S.V.P.series, in which contemporary forms of dance fuse with an expanded understanding of sculpture. The photographic triptych Performance Piece (1978) shows Nengudi’s fellow artist and lifelong collaborator Maren Hassinger with in an R.S.V.P. sculpture during one of the earliest documented performances of its kind at the Pearl C. Wood Gallery, Los Angeles. 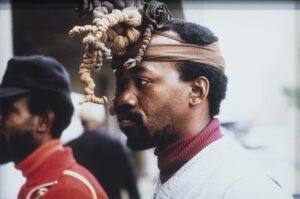 In the 1970s, Nengudi together with a group of fellow artists, musicians, and filmmakers founded Studio Z. The Los Angeles-based group—among its members were Hassinger and David Hammons—engaged in ”spontaneous actions” around town and supported each other at a time when African-American artists faced systemic discrimination and marginalization in the official art world. In the spring of 1978, members of Studio Z held the performance Ceremony for Freeway Fets, in which Nengudi intertwined disparate traditions from West African dance to Japanese theatrical forms and free jazz. The performance was, at the same time, set up as a ritual of reconciliation between the sexes with Nengudi’s nylon sculptures serving as masks, headdresses, and stage settings. The eleven-part photographic documentation of this remarkable performance, which took place under a freeway overpass in downtown Los Angeles, is key to an understanding of the artist’s eclectic practice.

Senga Nengudi (b. Chicago, 1943) lives and works in Colorado Springs, Colo., where she teaches at the University of Colorado. In recent years, several museums in the United States have mounted solo exhibitions of her work, including the USC Fisher Museum of Art, Los Angeles (2018), and the Museum of Contemporary Art Denver (2014). Her work was also on display at the 57th Venice Biennial in 2017 and in two widely noted group shows held that same year: We Wanted a Revolution: Black Radical Women, 1965–85 at the Brooklyn Museum in New York and Soul of a Nation: Art in the Age of Black Power at the Tate Modern, London.