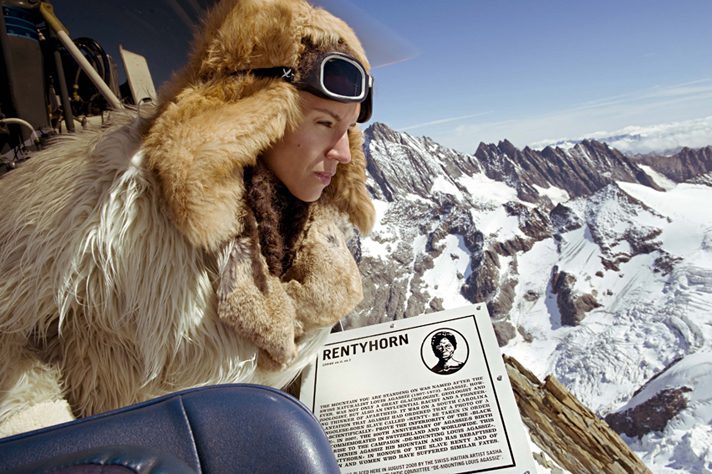 Swiss-Haitian-Finnish artist Sasha Huber uses performance, photography and film, among other media, to investigate colonial residues left in the environment. Her projects conceive of natural spaces—mountains, lakes, rock formations, glaciers, forests, and craters—as contested territories, highlighting the ways in which history is imprinted onto the landscape through acts of remembrance. Her artistic research especially draws her to investigate acts of memorialization through naming and the erection of monuments.

Marking the artist’s first solo in the Netherlands, this exhibition presents over a decade’s worth of work prompted by the cultural and political activist campaign Demounting Louis Agassiz. Founded in 2007 by Swiss historian Hans Fässler, the campaign seeks to make public the racist legacy of Swiss-born naturalist and glaciologist Louis Agassiz (1807–1873). His scientific contributions to the fields of glaciology, paleontology, and geology resulted in over 80 landmarks (and seven animals) bearing his name on Earth, Moon, and Mars. Less well known, however, is Agassiz’s legacy of ‘scientific’ racism, an ideology that includes miscegenation, or the suppression of interracial marriage, cohabitation and procreation, and the creation of racial hierarchies.

As a member of the Demounting Committee, Huber has staged numerous interventions at terrestrial and extraterrestrial sites bearing Agassiz’s name. The artist draws from both archival research and the embodied experience of moving through a world marked by the names of racist thinkers and policymakers, and in doing so seeks to make public the racist legacy of Louis Agassiz. On a practical level, this has entailed the artist’s involvement in local politics, lobbying, and petitioning for the renaming of these sites. On an aesthetic level, Huber explores art’s potential for engendering such sites’ symbolic rededication, affectively writing into being counter histories through movement, sound, and touch.

This exhibition is co-produced in collaboration with The Power Plant Contemporary Art Gallery, Toronto, Canada.