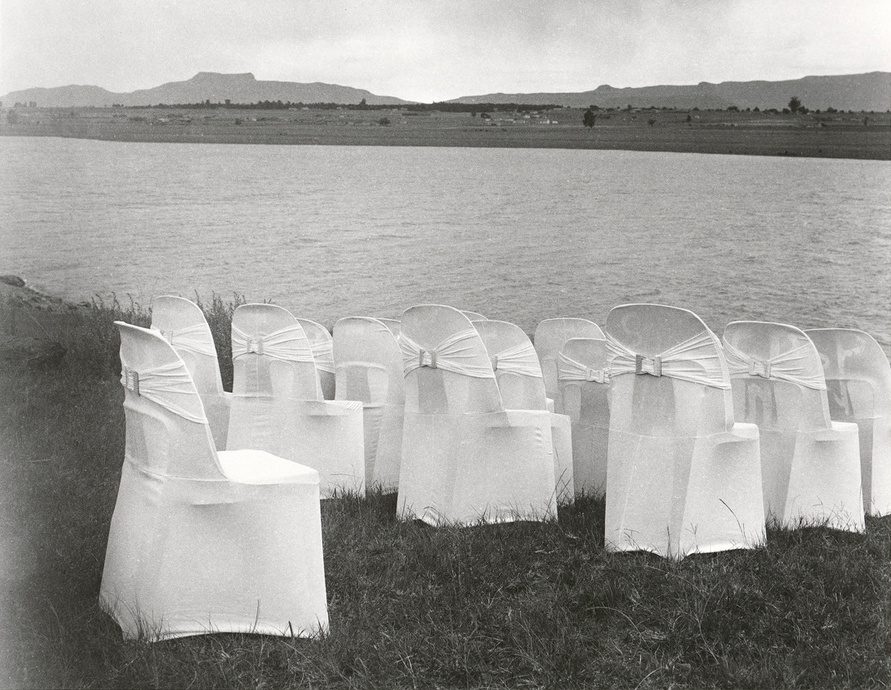 The Nguni word, isivumelwano, represents a contract, agreement or alliance. In Sabelo Mlangeni’s context, Isivumelwano is a cause for celebration and critique of the relationships we keep with others. Reflecting on previously unseen works that date back nearly 30 years, the South African photographer describes his work as magnifying ‘the systems we exist in (and against).’

As an excavated body (politic) of images, Isivumelwano draws time back to life in South Africa from 1994: a critical time for coexistence. The year marked a turning point for communities in the dark; generations – broken, Black – witnessed the cogs turn for freedom from the homelands. After a series of struggles, South Africa became a country that gave rise to Black majority rule: Amandla (power).

Like a ceremonial shroud obscuring brutality in black and white, Mlangeni’s photographic critique of the histories of injustice hangs high – yet is in no way direct. Instead, the series communicates a conscious act of social cohesion, reinforcing a pattern of power that is truly affirming: love.

As the American author, feminist, and social activist bell hooks understood, expressing love to one another is the ultimate practice of freedom: ‘ours is a shared struggle… we are each other’s fate’. Mlangeni’s photographs of wedding ceremonies among Black communities in Southern African sites such as KwaZulu-Natal, Alexandria township, and the artists’ hometown of Driefontein, record sacred moments throughout the marriage process. The camera’s intervention magnifies the ritual of love as a formal act that drives cultures from subjugation to celebration. As a political unifier, the contract – love – becomes a force of liberation.

In his survey of nuptials, the artist captures multiple stories of the bride, her groom and clansmen. Celebrants travel far and wide to bear witness, hold court and serve in their function, while others are framed bearing the heavy load of the heart, or bearing foodstuffs foraged, customary artefacts, and cattle reared for the cause.

Unions held in churches, community halls, wild grasslands, and in the shadows, upend inherited notions of the white wedding. The spectator is invited to observe Mlangeni’s delicate definition of love, with a nod to subversive sexual orientations and the precariousness of gender-based roles.

The significance of material culture – from the wedding cake – to Black folk goodly garbed in Western wears – is laid bare. Speaking plainly through images that teem with pride, the photographer’s elegant service to unions is a stoic reminder of those who have stolen our hearts.

Mlangeni’s Isivumelwano marks the covenant to spirits silenced – it speaks to people and places that hold hearts bound. Isivumelwano is a testament to the workings of love, which involves many and is often a tale of how it is denied – despite being owed to all.

Many of us who see these works have never known the scent of love, yet unyielding yearn for its ways, irrespective of whether it will last or lose.