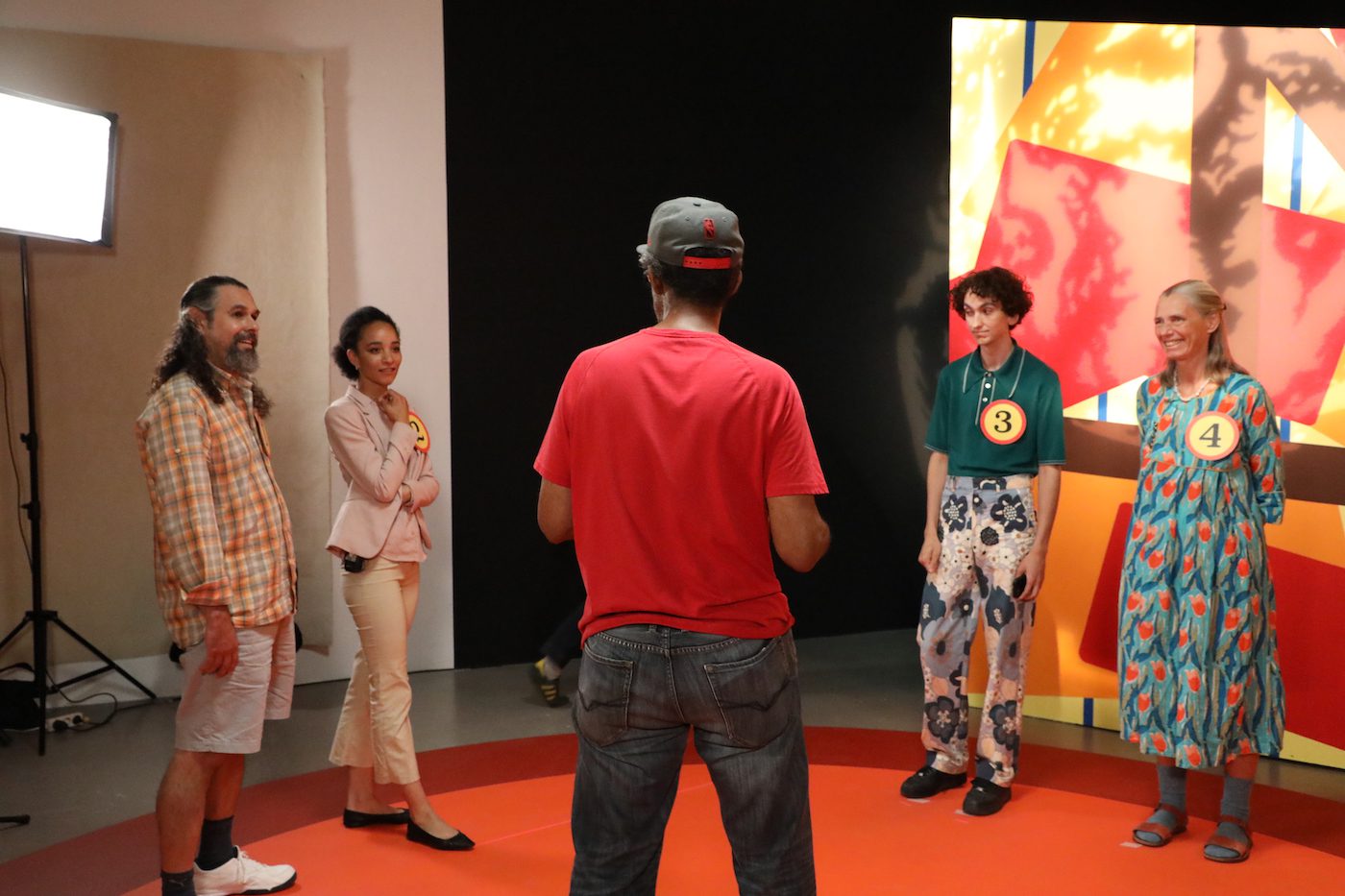 Portikus presents the first video solo exhibition in Germany by the renowned American artist, theater director and educator Pope.L (*1955), that will be on view from September 08 until November 21, 2021.

Misconceptions premieres Pope.L’s latest video production titled Missverständnisse, a work that portrays provocative stereotypes to address issues of misogyny, nation, xenophobia, racism, and prejudices that persist in society to this day. Pope.L’s new work employs satire, entertainment, and cultural taboos as vehicles for confronting pertinent and painful truths, including the blind subservience to patriarchy, class hierarchies, and the permutations of indifference.

Throughout a series of episodes of Pope.L’s reinvention of a TV game show staged and filmed at Portikus and in various locations around central Frankfurt, the contestants, comprising professional actors and amateurs, werechallengedtolook,listenandconfront gender clichés and racist stereotypes such as Blackface as seen in 19th century in the US and prevalent in German society and contribute their own opinions and convictions of the topic and about their fellow contestants.

Pope.L, whose works not only challenges but also engages imagery and conceptions of identity, nationality, equity, and race, and their histories, utilizes quotidian and prosaic situations as a means of “friendly” transmission. His projects, which alternate between portraiture, caricature, and tragedy, are subsequently presented in forms which appear easily consumable at first glance, but ultimately end in hiccups. Such blips are caused by collision of language, imagery, and activities which, in being frequently rendered inanuncomfortableandover-charged manner, reveal not only the complexity of their origins but ultimately their absurdity.

In Missverständnisse Pope.L uses the concept of a game show, a popular and well-known type of TV program where constestants compete for a prize, to draw an abstract and deliberately provocative representation of German society, employing Frankfurt’s demographics as its point of departure. Frankfurt is a paradigmatic city of extremes where Germany’s social and economic extremes collide and are pointedly apparent not least in the differences between the banking district’s skyscrapers and the city market for illegal substances and prostitution around the main train station, reflecting social disparities within the smallest of areas.

The game show script conceived and written by Pope.L intentionally localize racism and Blackness in an outdated notion of German culture and history as seen from the perspective of a charming but arrogant American. Likewise, the inclusion of a multi- generational range of participants with diverse life stories, professions, and cultural backgrounds not only highlight social differences but reinforces existing prejudices between them. By directly comparing the participants as game show contestants, prejudices and clichés that exist both within society and in themselves are reinforced. Pope.L’s work provokes a drastic, even if at times painful, a complex process of self- awareness and collective examination.

The dramaturgy of a game show, which relies on the desire for prestige and the combativeness of an individual to entertain the masses, becomes its own cliché in Misconceptions as a remix of the history of TV entertainment and its current incarnations. In its references ranging from the American variety and quiz shows of the 1950s and 1960s to the activity and adventure-driven game and reality TV shows that began to emerge during the 1980s, Missverständnisse reflects shifts in the uses of and the demands made on entertainment by society, leading to complete immersion in the life of others. Consequently – as is the case with Missverständnisse – it remains uncertain what is “real” and what is “feigned.”

Misconceptions as an exhibition offers many truths that can be unraveled bit by bit, in considering the behavior of the candidates in front of the camera, the scripted roles of the actors, and the documentary material that reveals the fabricated nature of Missverständnisse. The constant alternation between fake and real, fallacy and fact in both the production process and final video work makes not only the construction visible but also the clichés, stereotypes and “truth” being presented.

A cliché as a one-sided narrative, a word or opinion carelessly wielded in everyday life, has the same apparent significance in the script as the spontaneous reactions of the real contestants.
The challenge of Missverständnisse lies in allowing our own knowledge and convictions to be questioned even when the imagery and actions seem to be speaking an unequivocal language.