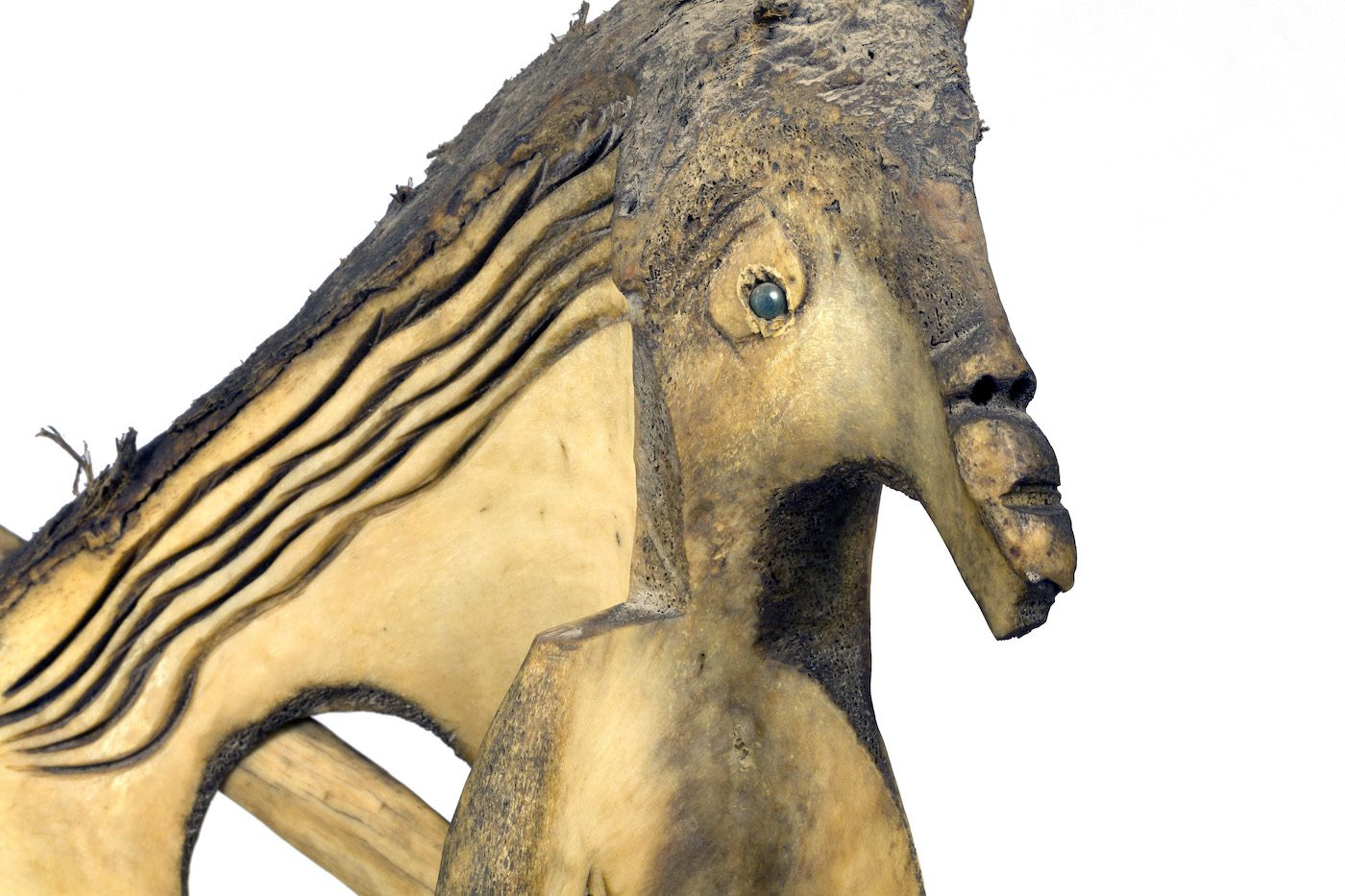 The online launch of the exhibition Return to the Source (Azibuyele Emasisweni) presented a landmark on the African continent. The 45 sculptures that feature in it, are not only extraordinary – made from animal bones teased into human features – a first for a contemporary festival – but are presented online with poems, songs, and words created by the artist, Pitika Ntuli, as well as some renowned academics and creative producers such as Homi K. Bhabha, Ngugi wa Thiong’o, Yvonne Chaka Chaka, Kwesi Owusu and Shaheen Merali. The result is a rich visual, audio, intellectual experience. African knowledge and spiritualism and creativity and art have never intermingled in this way before in the digital sphere.

As such the exhibition has drawn praise in Ntuli’s native South Africa.

“This is one of the highest of artistic achievements in the history of solo exhibitions in our country,” observed Naledi Pandor, South Africa’s minister of International Relations and Cooperation during the virtual opening of the exhibition.

“The uniqueness of Ntuli’s work arises from a deep pool of indigenous knowledge and wisdom and centuries old cultural tradition. From this angle one could argue that this exhibition affirms the significance of African value systems, which gives a sense of pride and hope to our peoples culture that has often been denigrated and  marginalised by colonialism and thus through this exhibition we are opening channels for healing,” added Pandor.

Ntuli could not have conceived of the Covid-19 pandemic or the 15-day protests following George Floyd’s murder ahead of working on this new body of work, which will also premiere at the country’s annual National Art Festival this month.  Yet his unusual and haunting sculptures made from animal bones, seem an apt response or antidote to the social and political upheaval of our times.

“This exhibition comes at the right time. The emphasis on healing has particular significance in the midst of the Covid pandemic and the uncertainty it has brought with it, which have given us an opportunity to reflect on our value systems and what we call the normal way of doing things,” said Pandor.

As the exhibition title Return to the Source (Azibuyele Emasisweni) suggests, Ntuli advocates a return to the ‘source’ of African spiritualism and knowledge as a way to reconnect with human ethics, the essence of existence, and, of course, nature.

At the age of eighty, Ntuli, who is a nationally celebrated figure, having been a political prisoner during the apartheid era, and served in leadership positions at various universities and institutions dedicated to tackling racism and cultural renewal, may be in a good position to guide society through his artistic expression.

As a Sangoma (a healer guided by African traditions) it is no surprise he has turned to animal bones as the medium, for this new body of work – 45 bone sculptures all paired with praise songs. This makes for an unexpected contemporary art exhibition; African spiritualism and contemporary art are rarely bedfellows and his use of animal bones (elephant, rhino, giraffe and horses) which are gently coaxed into anthropomorphic sculptures, make for haunting, though comforting imagery.

“In indigenous communities (in South Africa) diviners identify fault lines in the community, families, and/or in people, using bones. In Nguni culture specifically, to ‘throw bones’ means to divine the state of things, to help in the healing process. As a sangoma/healer I see divination bones as sculptures imbued with multiple meanings. I believe that bones have spirits and consciousness, and it is that, that I seek to reveal in this exhibition,” says the Johannesburg-based artist.

Despite the local specificity of his practice and approach, Ntuli views bones as symbolically rich from a universal perspective.
“Bones are the evidence that we were alive 3.5 million years ago, and they are carriers of our memories,” he observes.

Ntuli is also interested in bones of those African people who drowned in the Middle Passage during the era of slavery, that lie deep in the Atlantic Ocean.  The exhibition also seeks to honour this veritable bridge of bones, and all those who survived the atrocity of the slave trade, and whose descendants are now the so-called ‘Diaspora’.

“Once slaves had served their purpose they were discarded. The incorporation of discarded objects into my bone sculptures speaks to this horror, and the need to recycle our value systems and re-humanise our souls,” says Ntuli.

Return to the Source (Azibuyele Emasisweni) doesn’t only lead viewers back in time but through a unique and original use of material, form and symbolism reflecting on the spiritual wasteland that might define this era, it challenges those hard lines that were thought to divide ancient and contemporary concerns and art.

Pitika Ntuli was born in 1940 in Springs and grew up in Witbank in Mpumalanga, South Africa. During the apartheid era Ntuli was arrested and made a political prisoner until 1978, when international pressure forced his release. Thus he embarked on a prodigious career in exile. Since completing a Master of Fine Art at Pratt Institute in New York and an MA at Brunel University in London, in 1985 he has lectured art at various international and South African universities including; Central St. Martin’s College of Art and Wits University. He is primarily a sculptor. His stark skeletal structures are created in any physical medium he can find; metal, wood, stone, and bone and can range from small to monumental works in granite that weigh in excess of 19 tonnes. He has held numerous solo exhibitions and participated in a myriad of group exhibitions, mostly in London. His works are held in numerous important public, private and corporate collections.

The exhibition can be viewed on www.themelrosegallery.com