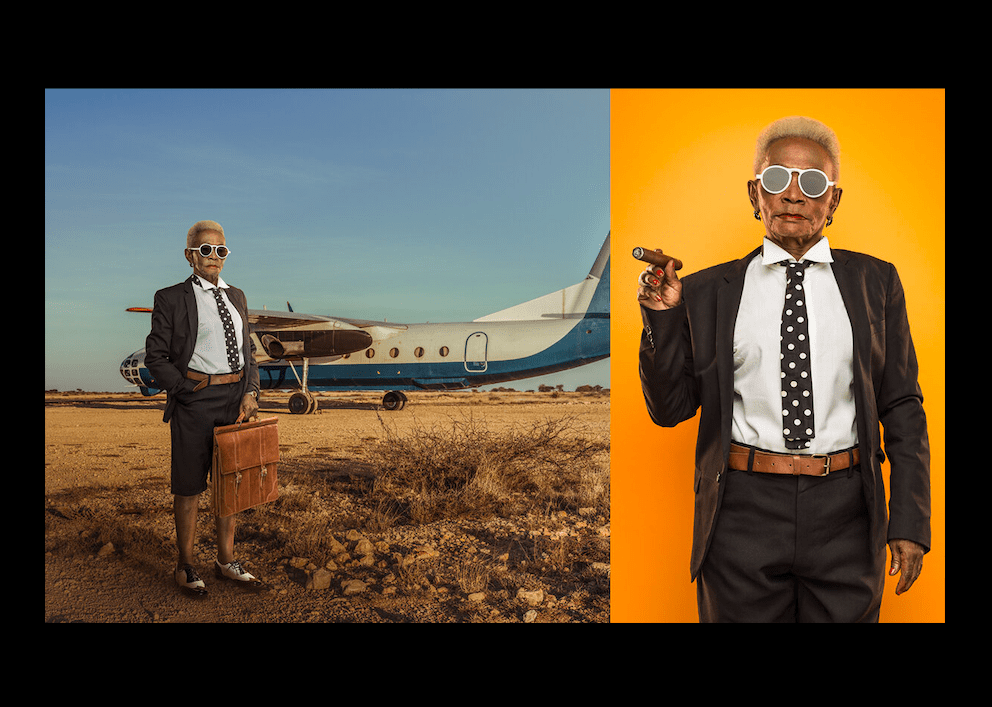 Osborne Macharia: Stories of the Future Past

Osborne Macharia: Stories of the Future Past showcases two distinct and breathtaking series – “Magadi” and “Nyanye” – from Vancouver-based, Kenyan-born Afrofuturist Osborne Macharia. Macharia’s unique brand of Afrofuturism suggests not just an attempt at historical revisionism, but a way to draw attention to issues – from gender abuse to FGM to dwarfism to elderly care – that too often fall out of the limelight. His extraordinary countermove is evidenced in his dreamlike images, where viewers are transported to an alternate realm; where the subject at hand is conveyed without distraction, shedding preconceived notions of what is possible and what is fantasy.

In his series “Nyanye,” which translates to a non-pejorative slang for “an old woman” in Swahili, Macharia’s metaphorical literacy flexes its muscles to flip our assumptions of ageing to showcase the style and swagger of our elders. Set under the stunning light of an Hargeisa sunset, each protagonist represents an elderly woman who held various positions of power in her career – now settling into a life of leisure and reclusive adventure as part of the League of Extraordinary Grannies.

Similarly, although calling attention to issues such as female genital mutilation (FGM) and child marriage, is Macharia’s breathtaking “Magadi” series. It features an Afrofuturistic presentation of a group of retired female circumcisers (FGM aides) who have abandoned their careers to become ethical fashionista’s in the hot and arid plains of Magadi, Kenya. They rescue young brides who are escaping child marriage and nurture their fashion sense while teaching them practical skills for survival.

Macharia is a self-taught Commercial Photographer and Visual Artist born and raised in Nairobi, Kenya and currently living in Vancouver, Canada. His style of photography falls within the genre of Afrofuturism, governed by two key elements – Cultural Identity and Fiction. Through storytelling and social inclusion, it creates a powerful platform to convey important messages on topics such as Equality, Inclusion, Representation, Gender Abuse, Ivory poaching, FGM, Albinism, Dwarfism, Conservation and Elderly Care.

Some of his accomplishments include being the first Kenyan ever to be appointed as a jury member for the prestigious Cannes Lion Awards and One Club / ADC Awards both in 2018. A Photo Vogue (2019) Selected Artist, a speaker at the University of Michigan’s Penny Stamps Speaker Series (2018) and Design Indaba speaker (2017). Osborne was also a finalist in the Hasselblad Masters 2016 competition. Osborne was also part of the team that won Kenya’s first ever Cannes Lion in 2015. His work has been published on Lurzer’s Archive 200 Best Digital Artists Worldwide 2015/16 and 2017/18.