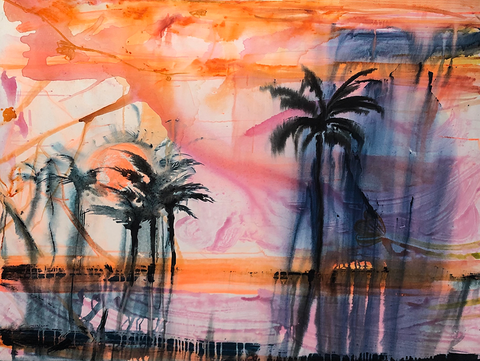 Omar Mahfoudi: Waiting in the Oasis

If the work of Moroccan artist Omar Mahfoudi was originally distinguished from a trend forbidding figurative images, it has gradually become detached from strict representation. His paintings, dreamlike panoramas that emerge from waves of colour, play with the border between the abstract and the figurative. The memory of his life in Tangier, as well as the temptation of a spiritual exile, impregnate his painting and give life to oases, timeless territories bathed in a distant light. This imagery, which is conducive to reverie, is fed and enriched by eclectic influences: from the Amazonia series by photographer Sebastiao Salgado, to the prints of Katsushika Hokusai, via Japanese art and contemporary mystical landscape painting. The same marvellous content is present as in Peter Doig’s work, as well as a meditative depth that evokes the ink of the Chinese artist Gao Xingjian, with similar considerations of the human figure.

Omar Mahfoudi plays with presence and absence. Emptiness fills his works with a mystery, alongside a form of existential solitude. Echoing the cinema of Thai director Apichatpong Weerasethakul – winner of the Palme d’Or at the Cannes Film Festival in 2010 – lush vegetation, disturbing shadows, and a washed-out atmosphere nourish Omar Mahfoudi’s visions, oscillating between lost paradise, melancholy twilight, and unfathomable nights.

Inherited from German Romanticism, the theme of man facing nature is suggested by a recurring character, absorbed by their environment. A ghostly bust emerges from the deep waters, a silent and penetrating presence. The bathers that punctuate Omar Mahfoudi’s paintings present the image of a floating body, evoking their timelessness. Reminiscent of ancient sculptures, they seem to await, in these landscapes preserved from any other human intrusion, the return to the balance of the world. The enchanting calm of these oases is counterbalanced by a form of threat from the fades to black and the ink drips, an expressionist treatment echoing tears. The moving gesture of the artist contributes to the blaze of these scenes, to which the colours are subjected. Between reality and illusion, memories and mirages, the light contributes to the supernatural dimension of these images. Under Omar Mahfoudi’s brushes, the night is both dark and inhabited, the moon offers a number of pictorial alternatives to the incandescent sun which usually illuminates his landscapes.

Thus, in this constant balancing act between light and darkness, figuration and abstraction, tension and appeasement, Omar Mahfoudi composes a painting that is both oxymoronic and cinematic. In the middle of the summer, itself crossed by its own shadowy zones, Waiting in the Oasis marks a dreamlike breath, a gap towards a beyond, where beauty emerges, as much from quietude as from torment.