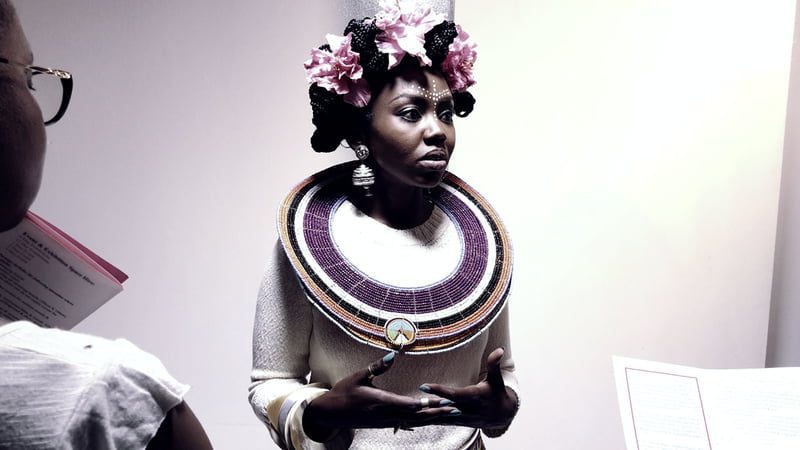 Afrofuturism is back. Beyoncé’s video Lemonade or the new Marvel film Black Panther have just as much been influenced by it as have the growing numbers of contemporary works by artists and designers from African countries and the Diaspora.

Afrofuturism is a pop-culture movement which ensued in the African-American communities in the 1950s as a result of racism and discrimination. It then wanted to serve as a contrast to the sad state of current affairs, with an own vision of a future full of hope built on a mythology and aesthetics full of blackness, science fiction, the idea of liberation, surrealism and pop. Many of the issues surrounding society back at that time remain unresolved today. Perhaps this is also the reason why so many creative people have chosen to reawaken the idea of Afrofuturism today.

At the last event within the ‘More Aphrike’ series, we want to learn more about Afrofuturism and, at the same time, view it from an African-centric perspective. What relationship do artists from African countries have to Afrofuturism? Is the latest hype surrounding Afrofuturism a chance to be taken seriously on an international level? Or is Afrofuturism just another label which the Western-dominated art market is slapping on art from African countries? In the talk with professor and doctor of philosophy Nana Adusei-Poku, we want to discuss this in depth. The talk is supported by a showing of Afrofuturism films and videos presented by M.Bassy, including the classic Space Is the Place by Sun Ra from the year 1974, now in a remastered quality.

The media artist Tabita Rezaira resides and works in Johannesburg, South Africa, as an inter-secular preacher and healer. She teaches Kemetic Kundalini yoga and researches the politics of technology. Tabita Rezaire’s art is dedicated to decolonisation healing through the politics of technology. By moving through architectures of power – both online and offline – her work focuses on the all-pervasive matrix of colonialism and its effect on the identity, technology, sexuality, health and spirituality of the people.

Mohau Modisakeng was born in Soweto in 1986 and lives and works between Johannesburg and Cape Town. He completed his undergraduate degree at the Michaelis School of Fine Art, Cape Town in 2009 and worked towards his Master’s degree at the same institution. His work engages race, the militarisation of society and the deep divides of post-apartheid South Africa and the post-colonial continent. He interrogates the collective narratives that inform our experience of the world, in particular those that evoke the black body as a site of fragmentation and distortion.

The Ghana-based filmmaker Frances Bodomo (to be confirmed) studied film at Columbia University and at the Tisch School of the Arts at NYU. Her first short film, Boneshaker (with Oscar-nominated Quvenzhané Wallis), was shown at more than 20 festivals. Afronauts celebrated its world premiere at the 2014 Sundance Film Festival.

One of the most significant and well-known representatives of Afrofuturism is the avant-garde jazz musician Herman Blount, who was reborn as the fictional figure Sun Ra from the planet Saturn. His entire collection of musical works covers various futuristic stories about outer space and interstellar voyages, from an African-American perspective. The universe is a utopic place for Sun Ra, where racism and discrimination can be overcome and all people find room for their own stories, thus empowering themselves and gaining freedom.

Nana Adusei-Poku (Dr. des) is an independent scholar, curator, writer and educator as well as Guest Lecturer in the Department Art and Media at the University of the Arts, Zurich. She was Research Professor for Visual Cultures 2015-17 and for Cultural Diversity from 2013-14 at the Hogeschool Rotterdam with affiliation to the Piet Zwart Institute and Willem de Kooning Academy.

The event series »More Aphrike« is funded by the TURN Fund of the German Federal Cultural Foundation, designed to encourage artistic cooperation between Germany and the African continent.