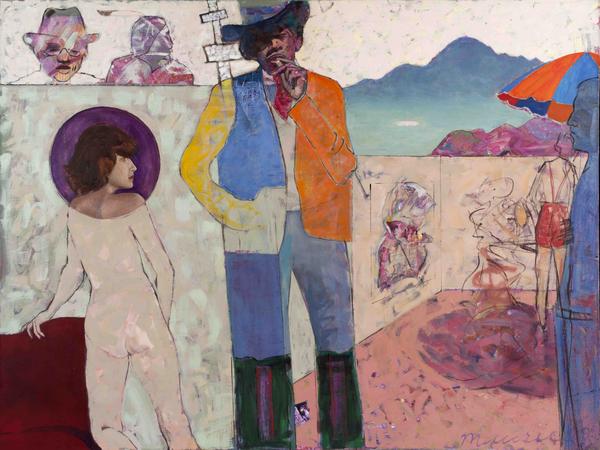 Gerald Peters Contemporary presents an exhibition of works by Maurice Burns (b. 1937) on view at 24 East 78th Street in New York. The exhibition marks the first appearance in New York of Burns’s vital, frequently autobiographical canvases, produced after the artist retreated to Santa Fe in the 1970s to immerse himself in painting.

A MacDowell fellow and Pollock-Krasner award recipient, Burns weaves together ideas and iconography from the Harlem Renaissance, Pop Art, and the School of London in pursuit of a cultural territory unbound by 20th-century conceptions of racial identity and the conventions of high culture. As Burns remixes art history and pop culture on his postmodern canvases, a distinctly personal imaginary emerges––one as complex and uncompromising as the jazz legends, Native American chiefs, mathematicians, and everyday people who populate his world.

Burns was raised in segregated Talladega, Alabama, to a multiracial family with roots in Africa, Scotland, and the Choctaw Nation. After being drafted by the US Army and serving three years of active duty, Burns’s prodigious intellect and mathematical ability initially guided him into a career in computer science. In his late twenties he decided to pursue his interest in art, which he had been quietly nurturing since childhood.

In 1968, Burns used funds from the GI Bill to enroll at the Rhode Island School of Design. While at RISD, he was mentored by John Torres, an African American sculptor intent on diversifying the arts community. In 1971, Burns received a scholarship to attend the summer program at the Skowhegan School of Painting and Sculpture. There he encountered Jacob Lawrence, who had a profound influence on the young artist. Lawrence counseled Burns that “you are born black … and whatever you do when you let your emotions go––whatever comes out will be a reflection of your black experience.”

After earning his BFA in 1972, Burns declined offers to pursue graduate work at Yale and elsewhere in favor of remaining in Providence to paint. That year he was granted his first of two fellowships through the Edward MacDowell Colony in Petersboro, New Hampshire, and he began exhibiting his work in Providence. After a devastating studio fire destroyed most of his work, however, Burns decided to pursue graduate work after all. He accepted a place at London’s Royal College of Art, where he spent two years pursuing his Master’s in painting.

In London, Burns met and befriended R.B. Kitaj, who became a close friend and mentor. Through Kitaj, Burns was introduced to many of the painters who would come to be known as the School of London—Michael Andrews and David Hockney, among others. Like these artists, many of them gay, Jewish, or otherwise marginalized, Burns was reckoning with history and exploring new ways of seeing himself. In their single-minded pursuit of figurative painting at a time when abstraction commanded the most attention and in the face of a rising wave of conceptual art, they gave Burns permission to paint the world as he saw it––or wanted to see it.

In 1974, Burns returned to Petersboro, where he had been granted a second MacDowell Fellowship. He soon reconnected with John Torres, who tapped him to establish a visiting artist program at the Institute of American Indian Arts in Santa Fe, New Mexico. Moving to Santa Fe in 1974, Burns stayed with IAIA for one term before making the decision to establish his own studio and devote himself to painting.

In Santa Fe, Burns became an integral part of a group of Native American artists––T.C. Cannon and Fritz Scholder, among others. Their work often challenged the mythos of Native American culture, and Burns’s paintings similarly reveal a lifelong search for identity and self-expression. “One of the main things I’ve had to face for myself,” Burns has said, “was not ever to deny who I am.” Burns has spent the past forty years working in seclusion, constructing his own cultural imaginary through references to jazz and the Harlem Renaissance, cinema, Native American culture, math and science, and everyday life in New Mexico. At first glance, his accessible iconography suggests a familiar world, but on closer inspection, Burns’s “complex variables”––Albert Einstein in a Native American headdress, the word “Illegal” inscribed on a rollicking jazz scene––reveal deep, personal associations. Through them, a glimpse of the artist emerges, and a new window opens onto cultural histories that were not quite visible before.