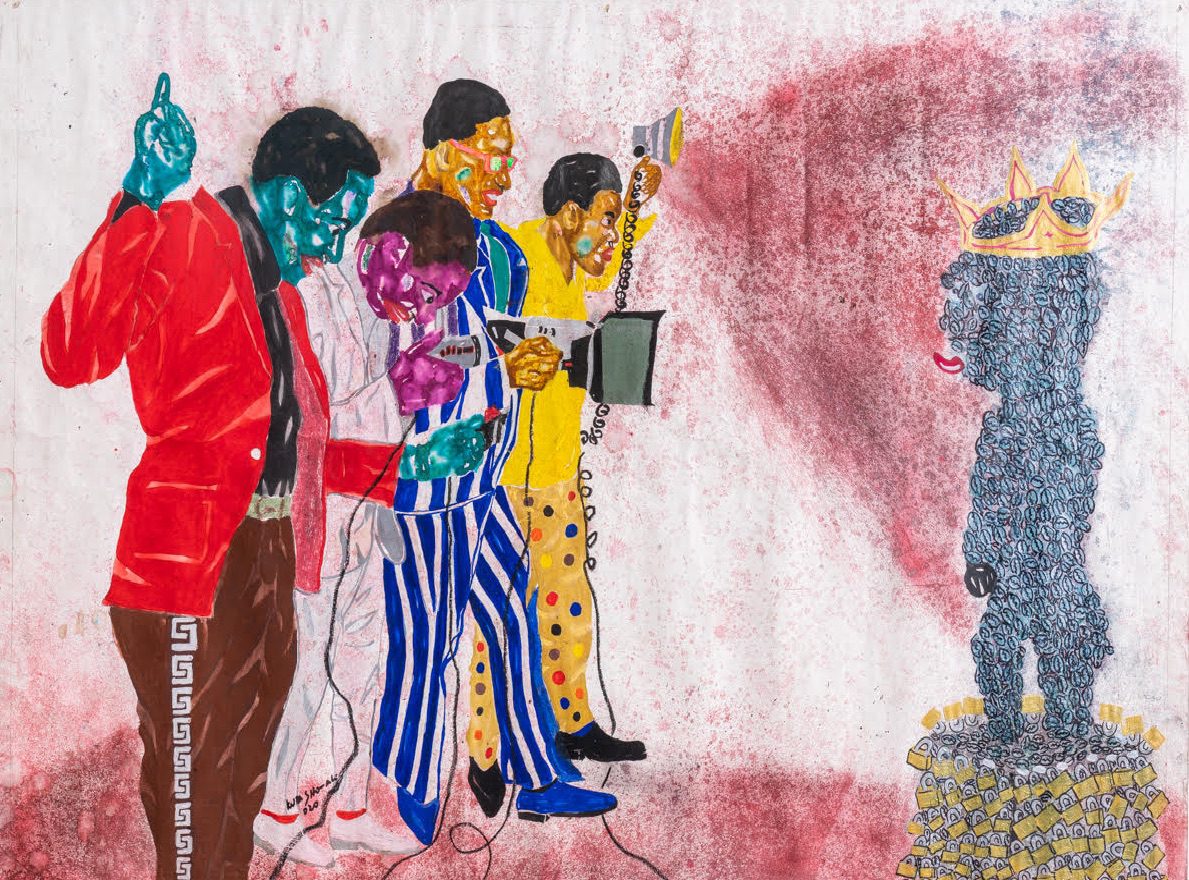 In Lingala, one of the main languages spoken in DR Congo, Masolo means conversation as well as storytelling. Masolo initiates a conversation across histories and cultures, where the artists play – often using collage – with various incongruous elements in order to generate new narratives which tell us another kind of history, one which celebrates the carnivalesque, the hybrid and the marginalized. But as with most things Congolese, always with humour. In Masolo, identity, migration and the shocking legacy of King Léopold are examined and deconstructed by the artists.

Traditional Congolese elements such as Luba caryatids and other power objects figure prominently in the storytelling of the artists as indexes of identity and power. Kura Shomali exposes with irony our paradoxical fascination with the return of looted African artefacts while Maliza Kiasuwa uses features from traditional African artworks to “Africanize” old European engravings representing white bourgeois figures thus creating an intimate conversation between her European and Congolese ancestors. In Tshamala’s work, these noble pieces restore dignity to King Léopold’s forgotten victims, now portrayed as heroes.

Kura Shomali’s work is an urgent reaction to the commotion, chaos and excitement of Kinshasa, the buzzing metropolis where he lives. Both cynical and humorous, he playfully appropriates the images of notable African photographers such as Samuel Fosso, Sammy Baloji and Malick Sidibé, as well as images from popular culture like cowboys (Mobutu loved dressing up as a cowboy), Mick Jagger, John Cougar Mellencamp, Bodyz Kingelez and others. Predominantly working on paper, Shomali applies bold charcoal, ballpoint pen, gouache, ink, marker and collage to create rich textures that are synonymous with his work.

Maliza Kiasuwa, who is of mixed Congolese and Romanian heritage, examines questions of identity and lineage through painting, stitching and collage by revisiting old engravings representing stiff pot-bellied white paternal ancestors and reimagining them with features from traditional African art in a labor of intimate métissage, reminiscent of surrealism.

Joycenath Tshamala explores migration issues, through the file d’attente series representing the bureaucratic exodus of Congolese people, waiting in line at airports to be processed, with their passports in hand. Tshamala works using rusty razor blades – the rust indexing chaos and entropy and the blades representing the cutting and uprooting of individuals leaving for Europe, often cutting off all ties with their families. His other series explores the restoring of human dignity – an attempt both to expose the atrocities perpetrated under King Leopold and to repair the horrific injuries suffered by hordes of unknown and forgotten Congolese, by sitting the mutilated victims on Caryatid stools, traditionally reserved for royalty.

Opening September 4 from 2 to 6 pm – In the presence of artist Maliza Kiasuwa.