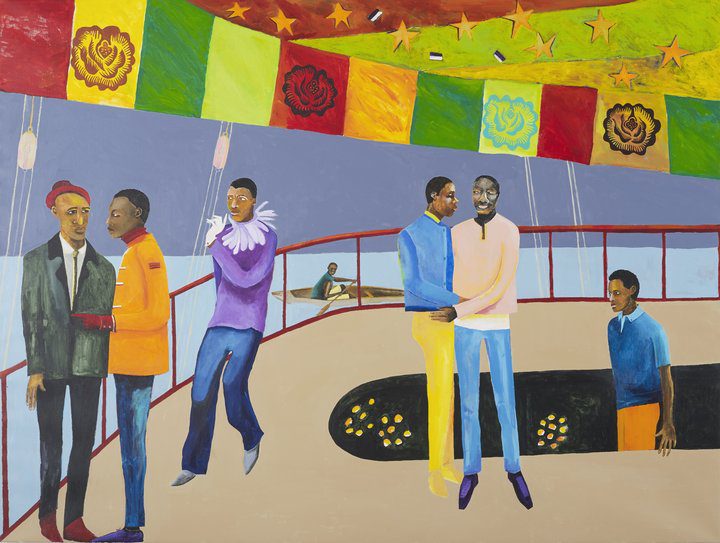 Over four decades, Lubaina Himid’s powerful and poetic work has made her an increasingly influential figure in contemporary art – from her pivotal role in the British Black arts movement of the 1980s to winning the Turner Prize in 2017. This autumn Tate Modern will present Himid’s largest solo exhibition to date, incorporating new paintings and significant highlights from across her remarkable career. Taking inspiration from the artist’s interest in opera and her training in theatre design, the show will unfold across a sequence of scenes which put the visitor centre-stage. Through a series of questions placed throughout the exhibition, Himid asks us to consider how the built environment, history, personal relationships and conflict shape the lives we lead.

Presenting over 50 works that bring together painting, everyday objects, poetic texts and sound, the exhibition will offer a rare chance to experience the breadth of Himid’s influential career. Early installations including the well-known A Fashionable Marriage 1984 will enter into a dialogue with recent works such as her series of large format paintings Le Rodeur 2016-18, while new paintings created during lockdown will go on public display for the first time. Himid says: “I have always thought of my work as starting when people get to see it. For me nothing starts until then.”

An early fascination with pattern, influenced by her mother’s career as a textile designer, has always been central to Himid’s work. “Patterns occur when I am talking to myself and trying to make visual the music, the sound, the noise and the poetry which underpins all of my work” says the artist. A series of suspended cloth flags inspired by East African kanga textiles will welcome visitors to the exhibition at Tate Modern, featuring evocative lines of poetry which address the kanga’s layered uses and meanings, as well as its associations with fashion.

Throughout her career, Himid has explored and expanded the possibilities of storytelling, encouraging the viewer to become an active participant in her work. A fictional architecture competition inspires the installation Jelly Mould Pavilions for Liverpool 2010, in which a series of hand-painted ceramic models celebrate the contributions of the African diaspora and invite viewers to reflect on the role of monuments in public space. Displayed at Tate Modern alongside a range of works including Metal Handkerchiefs 2019 in a room addressing architecture and the built environment, Himid poses the question: ‘We live in clothes, we live in buildings. Do they fit us?’

A major highlight of the exhibition will be the presence of sound installations, including Blue Grid Test 2020, created by Himid in collaboration with artist Magda Stawarska-Beavan. Displayed in the UK for the first time, this 25-metre-long painting features 64 patterns from all over the world, each painted a different shade of blue on top of a variety of objects pinned to the gallery walls. Coupled with a sound installation layering instrumental music with Himid’s voice, the work creates a visual and sonic embrace. Reflecting on this idea, Himid asks visitors: ‘What does love sound like?’

The show will culminate in a group of recent paintings and painted objects, which centre on extraordinary moments of everyday life which are rarely portrayed. The series Men in Drawers 2017-19 features tender portraits of imaginary figures inside vintage wooden furniture, while works like Cover the Surface 2019 depict intimate interactions and moments of indecision between men. Himid also continues to explore women’s creativity in her recent paintings, including The Operating Table 2019, which places visitors among a group of women in the throes of conversation and planning. With each painting the artist asks us to consider ‘What happens now?’

The exhibition is organised by Tate Modern in collaboration with Musée cantonal des Beaux-Arts de Lausanne/Plateforme 10. Lubaina Himid is curated by Michael Wellen, Curator, International Art, Tate Modern and Amrita Dhallu, Assistant Curator, International Art, Tate Modern. The exhibition is accompanied by a new book from Tate Publishing, featuring a range of contributors and writings by the artist, as well as exclusive new homeware, prints, fashion and Limited Editions in the Tate Shop.