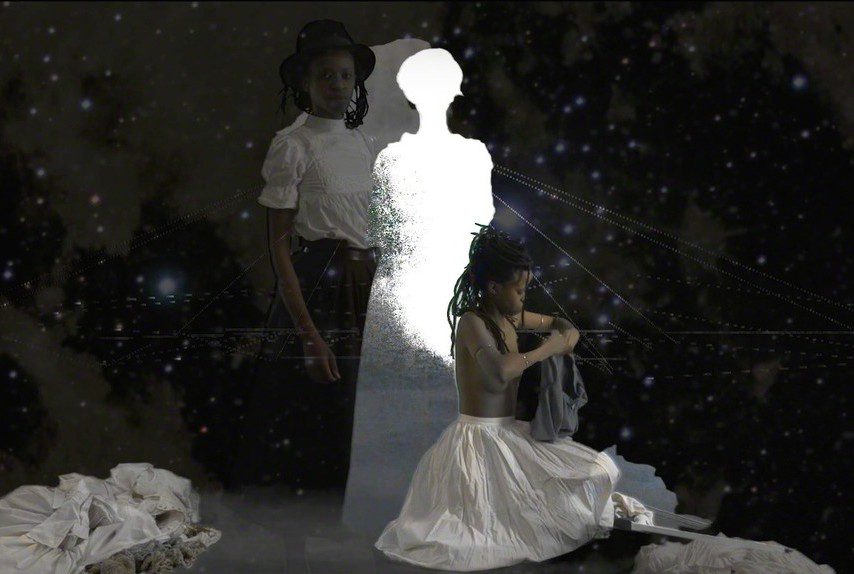 Kitso Lynn Lelliott ‚I was her and she was me and those we might become‘, (2016) Video Still,20 min, multichannel HD video projection, image courtesy of the artist and ROOM Gallery & Projects
1/1
1/1

Kitso Lynn Lelliott: I was her and she was me and those we might become

Kitso Lynn Lelliott ‚I was her and she was me and those we might become‘, (2016) Video Still,20 min, multichannel HD video projection, image courtesy of the artist and ROOM Gallery & Projects

ROOM announces the solo presentation of a multimedia body of work by Kitso Lynn Lelliott, titled I was her and she was me and those we might become.

The selected video and installation based artworks form part of Lelliott’s PhD in Film Studies, at University of Witwatersrand, Johannesburg. In the presentation, the artist elaborates on her interrogation of the philosophical underpinnings and ontological construct of race that emerged during the European Imperial era, which in turn have resulted in the production of an ”Othering” using hegemonic colonial languages. Her research further delves into the perpetuation of idea of “racially marked beings” with the associated violent omissions, erasure and deletion of knowledges carried in diverse languages.

The artist explores her contestation of these predominant narratives utilizing the language of the ghostly to allude to a sense of simultaneous presence and absence of elided knowledge and histories. By making the processes of erasure visible she achieves this by referencing history, imagining, mythology, memory and a multitude of ancestral histories, thus utilizing a multi-epistemological approach to knowledge in relation to de-colonial accounts of history.

The project has taken shape around and in relation to the many places. Kitso Lynn Lelliott has shown her work in and ‘interfered’ with – ranging from slave castles to auction blocks to modern metropolises forged through coloniality. She states:

I have been curios about offering back these enunciations as a series of installations/interventions in response to space and narrative and tracing a dialogue as it develops. It is an experiment towards aesthetically and theoretically denying the stilling rigidity of the monologue of authoritative enunciation while becoming self/other through dialogue. It is a gesture to reclaim an agency to articulate the narratives that make us, through dialogue that is always in flux, so they might produce a shape we see fit for ourselves.

Visually the work I was her and she was me and those we might become takes on these ideas by articulating the concept of Sankofa (An Adinkra concept loosely meaning one has to look back from where they came to see where they are going) through the use of tools and resources of the internet age while privileging Sankofa as a concept located in an African Adinkra knowledge system.

The work speaks to ideas pertaining to movement and migration of overlapping imaginaries and identities using imagery that locates it in relation to this idea of ‘deep time’ while the method relies on most contemporary of mediums. It is a gesture towards how we, individually and collectively, personally and culturally shape shift as our world shifts. As we are constantly becoming in communication and in translation with those we inevitably come across in those cross currents of time and space, the work produces and functions at that intersection of temporal and spatial [the Place] of becoming imaginatively and in relation where there is an agency to orchestrate the things that make us.

KITSO LYNN LELLIOTT has an MFA in art and is a PhD candidate at Wits University. She is preoccupied with enunciations from spaces beyond epistemic power and the crisis such epistemically disobedient articulations cause to hegemony. Her current work and doctorate interrogate the production of the ‘real’ through contesting narratives and the shape this ‘real’ settled into over the waters of the Atlantic during the formative episode that shaped the modern age, a project initiated during her residency with the Sacatar Foundation in Brazil. Her work is an enactment of enunciating from elision and between historically subjugated subjectivities while privileging South-South relations imaginatively and epistemologically unmediated by the Global North. Her work has shown at film-festivals, art galleries and museum shows around the world. She is alumna of the Berlinale Talents in Durban and Berlin. She was one of the Mail & Guardian’s  leading 200 young South Africans and was laureate of the French Institute 2015 Visas pour la création grant. She exhibited in the Bamako Encounters 2015, ’Seven Hills’ Kampala Biennale in 2016, the Casablanca Biennale 2016 and the 2nd Changjiang International Photography and Video Biennale in 2017.