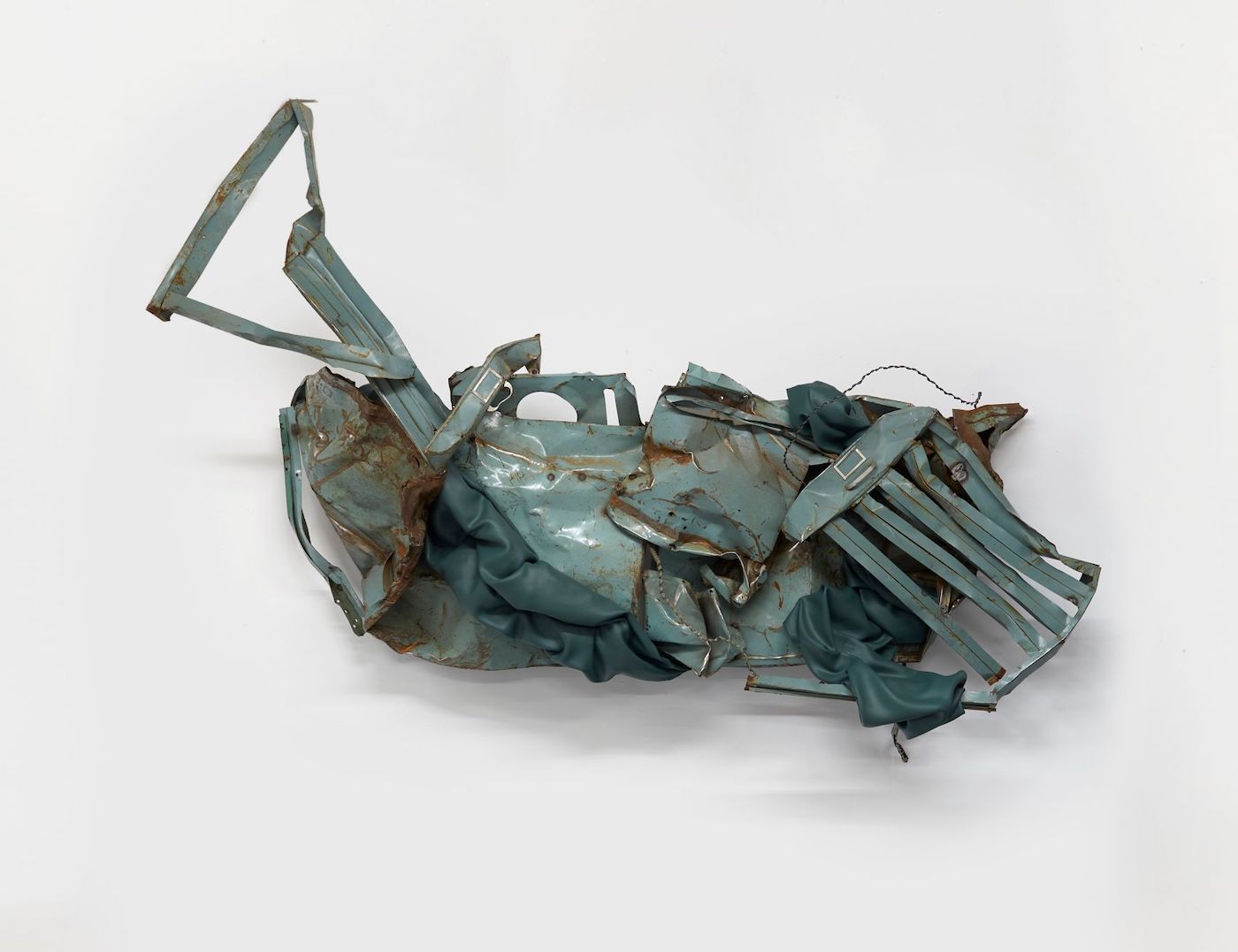 Tilton Gallery presents a solo exhibition of new sculpture by Kennedy Yanko, from April 6th to May 15th, 2021. We encourage visitors to call in advance on opening day to assure an even flow and safe viewing experience.

Kennedy Yanko continues her ongiong investigation into the combination of the seemingly incongruous materials of metal and paint skins to create voluptuous and unexpected sculptural forms. Salvaged metal, crushed or bent into new forms, is juxtaposed with lushly colored soft-appearing paint skins formulated by the artist to flow organically around or through the harder metal forms, at times seeming to pour out of this less pliant element.

Yanko melds the two materials and experiments with her very personal color palette to create works that defy the traditionally static nature of sculpture and that have a sense of continuous movement.

In this new body of work, Yanko has added a new element: wires. Straight and taut, they are threaded through the works like drawings in space, exerting pressure on the paint skins while extending the sculptures’ essence beyond their perceived boundaries. They become yet another way that Yanko causes the viewer to think anew about the sculptures’ relationships to walls and space and in turn to consider our own position in relation to these works within this cultural moment in time.

Kennedy Yanko is a Brooklyn-based artist, born in 1988 in St. Louis, Missouri. Yanko’s work has been exhibited in group museum exhibitions including Parallels and Peripheries curated by Larry Ossei-Mensah at the Museum of Contemporary Art, Detroit in 2019 and Life During WarTime curated by Christian Viveros at the University of South Florida Contemporary Art Museum in 2020. She installed her first public sculpture, 3 WAYS, on the Poydras Corridor in New Orleans in collaboration with The Helis Foundation and the Ogden Museum of Art. Yanko has had solo exhibitions at the Urban Institute for Contemporary Art in Grand Rapids, Michigan; Jenkins Johnson Project Space, Brooklyn, NY, Denny Dimin Gallery, New York, Kavi Gupta Gallery, Chicago, and Vielmetter Gallery, Los Angeles. Yanko was named Artforum’s “Critic’s Pick,” received a Colene Brown Art Prize awarded by BRIC Arts Media, and was featured in 100 Sculptors of Tomorrow published by Thames & Hudson. Yanko is the 2021 Artist-in-Residence at the Rubell Museum, Miami. The residency is supported in part by the Knight Foundation.

As a sculptor whose practice is built upon paradox, my work addresses how human perception and societal expectations are often in conflict with each other. I utilize reframing to challenge what we think we understand, and ask viewers to investigate realities outside of their learned ways of seeing. I select materials that vibrate wiht both harmony and discord to convey the interior friction that arises when one is tasked with altering a preconceived notion.

After I pull metal and other matierals from salvage yards, I sit with them in a formal dialogue. I have to understand their physical stance before I can comprehend their presence conceptually. In time, the objects’ stories reveal themselves to me. From there, I can begin to transition the material away from its previous circumstances and reposition its atomic particles (literally, and metaphorically) such that their compositions may be percceived differently and thus newly defined.

The “paint skins” that I pour – once dried – also become structural components with breadth, width, depth, and three-dimensional surface area. When joined with another material (metal, marble, glass), the reciprocity of the skin and the object make the two surfaces nearly indivisible, and at times, indistinguishable. This resulting optical illusion refers back to the fundamental behavior of atoms, in which their context informs their presentation. The materials, when in intimate dialogue, merge.

By employing a call-and-response between the visible histories of these objects and the intrigue of the skins, I allow the materials to comment on each other. I seek to reveal trucths and emphasize the power of decision. Ultimately, I hope to capture the critical role that each individual’s contribution plays in affecting the whole by embodying the cultural moment and being a conduit to its pulses.