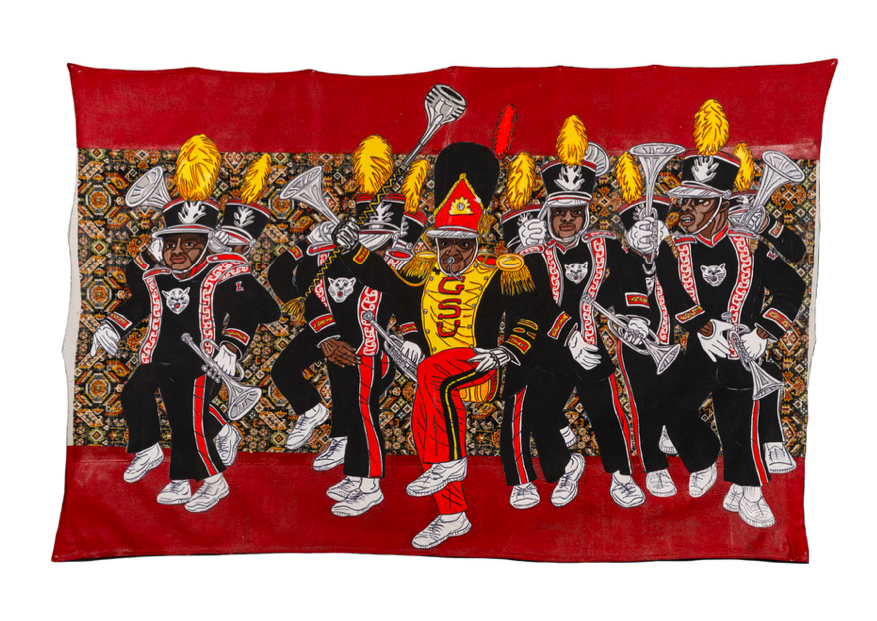 The highlight of this event is the Battle of the Bands, a resplendent halftime show in which the marching bands of the two schools compete to deliver the most sensational performance. For Duncan, the pageantry and ceremonial elements that are hallmarks of the HBCU band performances are contemporary analogs for African American traditions. The drum majors and musicians depicted in his work in brilliant, vibrating hues, are “symbols of African warriors dancing in front of the king or the queen, like a pageantry of ceremonious splendor.” The artist further explains, “I saw them in that light and it’s part of our heritage beyond New Orleans.” Indeed, thousands of supporters of the Bayou Classic travel from across the nation to participate in the various festivities that unfold around the event; a multi-generational audience of students, alumni, and relatives gathers for this moment, paralleling an all-encompassing family reunion. For many, “the Classic” is an essential tradition that helps to preserve the mission of the HBCUs, which were established to nourish the talent and brilliance of African American people in a mutually supportive environment.

Keith Duncan: Bayou Classic features a conversation with the artist and Franklin Sirmans, curator, writer, and director of the Perez Art Museum Miami. “The work that we are talking about, that has to do with the marching bands obviously comes from New Orleans. It’s very specific to the tradition and history there,” Sirmans notes. He also highlights the importance of bringing this work to a larger audience, stating, “It’s about a level of communication and you have come to a place where you’re able to communicate with the work in the sphere of the white cube just as easily as you have in other environments.” Sirmans has long explored the topics of sports and music in relationship to wider cultures through surveys such as Fútbol: The Beautiful Game (2014) at the Los Angeles County Museum of Art (LACMA) and One Planet Under a Groove: Contemporary Art and Hip Hop at the Bronx Museum of the Arts.

Keith Duncan was born in Plaquemines Parish, Louisiana in 1967. He received a BFA from Louisiana State University, and an MFA from Hunter College (CUNY) New York, NY. The CUE Arts Foundation New York presented a solo exhibition of his work, followed by inclusion of all works from the exhibition in Prospect.2 by curator Dan Cameron. Further solo exhibitions include the Ohr-O’Keefe Museum of Art in Biloxi, Mississippi and Corridor Gallery, Brooklyn, NY. Duncan was included in Thelma Golden’s “Black Romantic” exhibition at the Studio Museum in Harlem in 2002. Further selected group exhibitions include the Ogden Museum of Southern Art in New Orleans, LA, Paul and Lulu Hilliard University Art Museum in Lafayette, LA, Art in General, David Beitzel Gallery, Rush Arts Gallery, Williamsburg Music Center, Brooklyn, NY, Bronx River Arts Center, The Museum of Contemporary Art, Pontiac, MI, Tustin Center, Philadelphia, PA, and the Artist Center & Gallery, Richmond, VA. His work is included in the permanent collections of the Ogden Museum of Southern Art and the New Orleans Museum of Art.