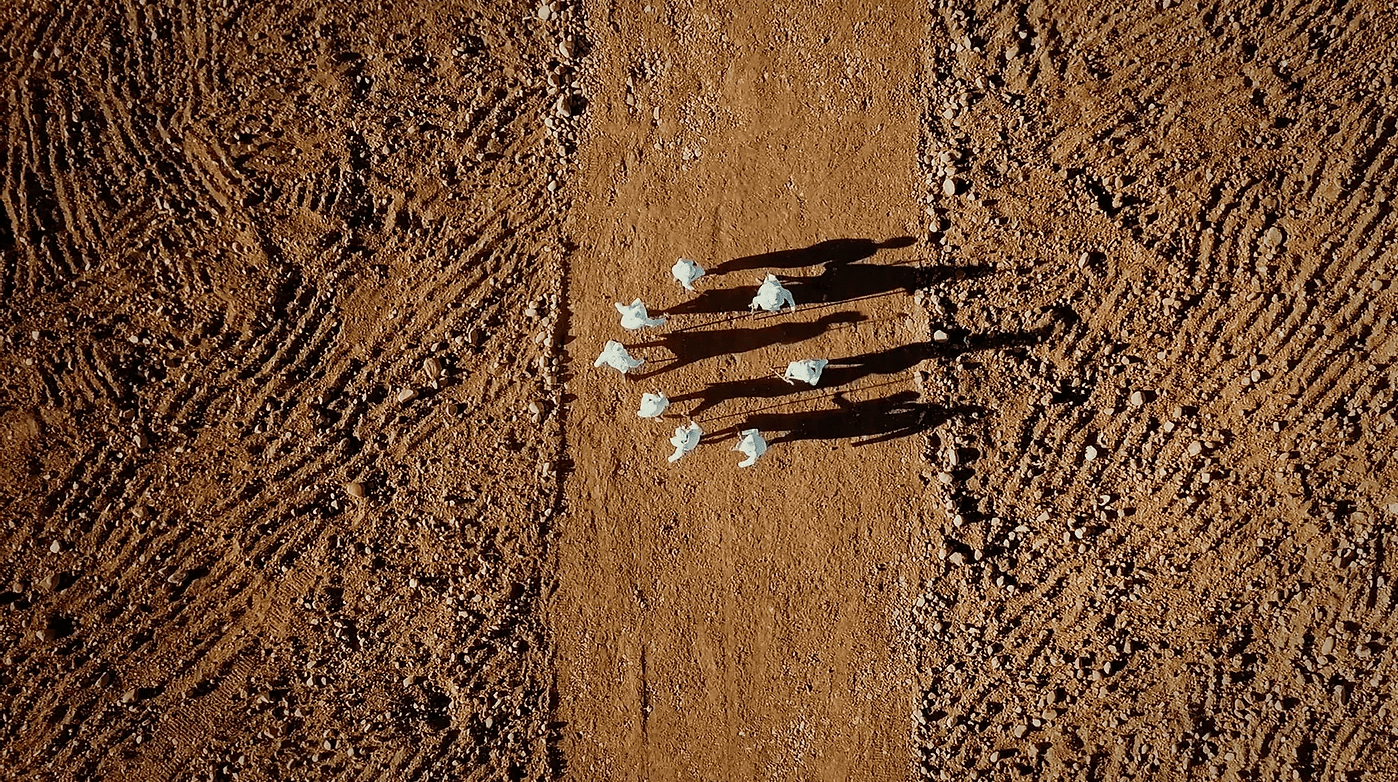 From its beginnings, when it entered the international art scene in the 1960s, the video camera was embraced and appropriated mainly by women artists. The possibilities of experimentation and self-representation that it offers as well as the absence, as a new medium, of the prejudicial rules that govern the arts, has made the field of video art a space of expression prized by the avant-gardes. Using the camera as a catalyst – for therapeutic, educational and expressive purposes – many contemporary artists have since dedicated themselves to empowering others by re-building a reliable sense of self and identity politics. Thus, the corporality involved in performing in front of the camera offers a rare opportunity to claim control of one’s own body and to position oneself, on one’s own terms, in the public space.

The exhibition GODDESSES OF HEALING is a powerful healing journey through historical and social injustice. It is the complex layers of displacement, identity and belonging that are subtly explored in the video works of the Afro-American artist Lorna Simpson, the Franco-Guyanese artist Tabita Rezaire and the South African artists Berni Seale and Buhlebezwe Siwani. In these performative narratives, the relationship to color, ethnicity, gender, land, race and sexuality is evoked as are the timeless emotional, physical, and spiritual trials associated with the politics of cultural erasure and structural exclusion. By highlighting and embodying silent narratives, the artists seek to challenge the roles assigned by our societies as well as to change perceptions of Western notions of history. Accepting, incarnating and speaking about trauma and unresolved feelings of injustice is paramount to the healing process of individuals and collectivises.

The viewer explores as the first piece of the show at M.Bassy, Lorna Simpson’s video work CLOUDSCAPE (2004), a theatrical scene of a solitary image of the black male figure in a dark setting (performed by Terry Adkins), whistling the old tune ‘Cloudscape’ – a Negro Spiritual as sung by the Fisk Jubilee Singers in the 1920s – appearing and disappearing ad infinitum in a cloud of mist. The role of race and gender attributed to the black man in American society is questioned here, as well as the recurring ups and downs of racial struggles for equality. Presented in the second space of the exhibition, Berni Searle’s double projection SNOW WHITE (2001) is a narrative performed by the artist. It is a scenic representation of her naked body on which white flour is raining, kneeling on the ground and enveloped by a black background. During this long dramatic sequence, the artist kneads the dough created around her. Her body foster the awakening of the viewer on expression of discrimination and the deep psychological impact resulting from our violent history of apartheid and colonialism that is passed down through generations. The incessant exoticization, fetishization, obliteration and suffering of the black female body is equally central to Buhlebezwe Siwani’s three-channel installation AMAHUBO (2018). Here, a ceremonial is performed by a group of women dressed in white in an astonishing landscape of the South African countryside.

In regard of the video’s voice-over, we listen to the poet Christie van Zyl, reciting a poem that recounts the history of the country and its vivid memories of segregation, sexist and racist discrimination. The work addresses the spoliation of African lands, the way they were taken from the populations and how they subsist in these spaces. It also fosters awareness of the weight of expectations towards black women in these structures of control and their systematic obliteration in the discourses of history. The title of her word »AmaHubo« refers to self-love and the love of the god(ess) within oneself.

The exhibition GODDESSES OF HEALING will be joined by a screening of video works by TABITA REZAIRE at the space of Frappant e.V. between 27. – 28.11.2021. As a powerful agent of healing, the artist’s multi-dimensional practices merge digital, bodily and ancestral memory, networked science and scientific imagination. With a millennial aesthetic specific to her body of work, powerfully mixing the influences of ancient knowledge with those of pop and digital culture.

The exhibition GODDESSES OF HEALING is conceptualized and organized by M.Bassy e.V. in collaboration with Âme Nue. We give our special thanks to the Daimler Art Collection, Stuttgart/Berlin for their loan as well as to the Ministry of Culture and Media Hamburg, Claussen-Simon-Foundation, Berlin and the Rudolf Augstein Foundation, Kunstfond NEUSTART Kultur for their generous financial support.

Artists:
TABITA REZAIRE (*1989, Paris)
Tabita Rezaire is infinity incarnated into an agent of healing. Her cross-dimensional practices envision network sciences – organic, electronic and spiritual – as healing technologies to serve the shift towards heart consciousness. Navigating digital, corporeal and ancestral memory, she digs into scientific imaginaries to tackle the pervasive matrix of coloniality and the protocols of energetic misalignments that affect the songs of our body-mind-spirits. Tabita’s work is rooted in time-spaces where technology and spirituality intersect as fertile ground to nourish visions for connection and emancipation. The screen interfaces of her decolonial digital healing offer substitute readings to dominant narratives, while her collective offerings remind us to nurture our soul.

BERNI SEARLE (*1964 KAPSTADT)
Berni Searle works with photography, video, film and installations to stage narratives connected the colonial South African past, memory, embodiment and place drawing on universal emotions associated with vulnerability, loss and beauty in a predominantly performative artistic practice. She received i.a. the Minister of Culture prize at the Dak’art Biennale (2000), the Standard Bank Young Artist Award (2003) and was honored as the Rockefeller Bellagio Creative Arts Fellow (2014). She exhibited internationally i.a. at the Victoria and Albert Museum, London, Museum of Contemporary Art of Rome, Museum of Modern Art, New York, San Francisco Museum of Modern Art and participated in the 2nd Johannesburg Biennale (1997), the 49th (2001) as well as 51st (2005) Venice Biennales.

In her double projection SNOW WHITE (2001) takes up the perfidious process of discriminatory classification during Apartheid in South Africa by making her own body available. The artist can be seen from two different angles – head-on and vertically from above. Water and flour are trickling down on to her naked body to form a pale layer–a visually poetic, corporal masking at the brink of inner and outer sphere. Searle starts to knead the flour and water into dough–an individual search for what identity and womanhood can be beyond categorical, superficial attributions. The title of the work, SNOW WHITE, refers to the fairy tale Schneewittchen by the Grimm Brothers revealing the commonplace of sexist and racist narratives and representations in western culture. Searle’s performative bodily practice is a means of inventing herself again.

LORNA SIMPSON (*1960 NEW YORK)
Lorna Simpson is a conceptual photographer and multimedia artist devoting her artistic work to the experiences of African-American women in history and nowadays society. In a transformative process of delocalization and new-localization, fragmented narratives of identity, gender, space, and time emerge that the viewer is meant to complete by his own individual expectations revealing the constructive and elusive character of these social categories. Simpson was awarded i.a. the Whitney Museum of American Art Award (2001) and is member of the American Academy of Arts and Sciences (since 2016). Her work has been shown in numerous international exhibitions and she participated at documenta 11 (2002) in Kassel and at the 56th Venice Biennale (2015).

Lorna Simpson, Cloudscape, 2004 Single-channel video installation, black and white, sound, looped, Copyright by Lorna Simpson – Courtesy the artist and Hauser & Wirth
The video work CLOUDSCAPE (2004) isolates one man (the artist Terry Adkins) in a dark room, spotlighted as he whistles a tune and is enveloped in fog. The hazy spatial aesthetic is transferred to the temporal level by installing the video in a continuous loop. For Simpson, whistling and humming are signs of the body generating music and personal sensual and emotional expression. The solitary image of the black male figure whistling and enveloped by fog appears to be a poetic song of becoming and vanishing from the charnel house of the racial and sexist sublime, disappearing visually into the haze, but still lingering in our collective unconsciousness.

In the 3-channel video work AMAHUBO (2018) a ceremonial is performed by a group of women dressed in white in an astonishing landscape of the South African countryside. In regard of the video’s voice-over, we listen to the poet Christie van Zyl, reciting a poem that recounts the history of the country and its vivid memories of segregation, sexist and racist discrimination how Christianity demonized African spiritualisms. When it comes to Christian churches, black female bodies have been the most vulnerable ones seeing that women are expected to maintain some form of ideological purity as well as to offer themselves up in a physical way to the church. Where you should be finding peace and solace, you are finding people are exploited, suppressed and erased from the official narratives. Today, land has been co-opted and people subsists in those –spaces– not only the country, but also female wisdom and heritage have been conquered back. The word amahubo is referring to passages about loving yourselves and loving the god within you–far from one god or patriarchal religious structures.