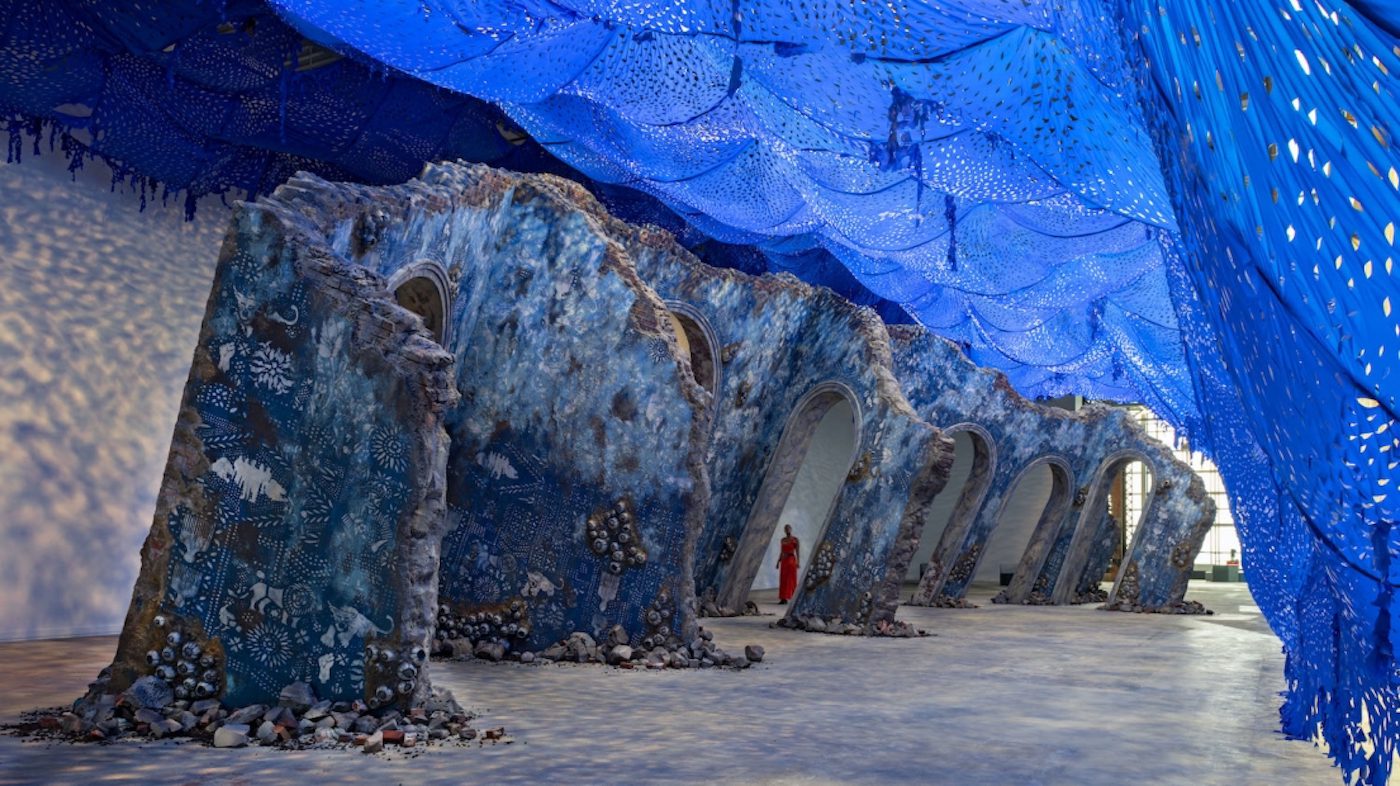 ICA Watershed is featuring a newly commissioned, monumental sculpture by acclaimed artist Firelei Báez. In her largest sculptural installation to date, the artist reimagines the archeological ruins of the Sans-Souci Palace in Haiti as though they were revealed in East Boston after the sea receded from the Watershed floor. The Watershed’s location—in a working shipyard and as a trade site and point of entry and home for immigrants over decades—provides a pivotal point of reference.

“Báez’s visual references draw from a wide variety of sources in the past, and are reconfigured to explore new possibilities in the present. Her site-specific installation at the Watershed combines her interests in various diasporic narratives—African, European, Caribbean—to cast cultural and regional histories into an imaginative realm,” said Eva Respini.

The artists’ architectural sculpture is adapted from the Sans-Souci Palace in Milot, Haiti, built between 1810 and 1813 for the revolutionary leader and first King of Haiti, Henri Christophe I. The Haitian Revolution, led by self-liberated enslaved people against the French colonial government, was an early precursor to the abolition movements of the United States. Once a space of splendor, since an 1842 earthquake, the castle has been an archeological ruin. At the Watershed, Báez reimagines these ruins emerging from Boston Harbor’s sea floor. She embeds Sans-Souci within the geological layers of Boston, where histories of revolution and independence are integral, including often overlooked related narratives from non-European locations.

Báez’s intricately painted architectural surfaces include symbols of healing and resistance as well as sea growths native to Caribbean waters. Originally trained as a painter, Báez is an expert of trompe l’oeil. She considers all of her work, even the sculpture at the Watershed, to belong to the illusionistic realm of painting. The work could be considered a hybrid, where the illusion of a painting and physicality of a sculpture meet. The patterning of the sculpture’s surface is drawn largely from West African indigo printing appropriated from enslaved peoples in the 17th-century American South. American indigo was a driving force in the early national economy, and one of the primary trade goods shipped from colonial-era Boston. This material became intrinsically woven into early American decorative and utilitarian textiles—a symbol of “true blue” Americana. Báez’s sculpture points to the centuries-long exchange of ideas and influence between Europe, the African continent, and the Americas.

Firelei Báez was born in 1981 in Santiago de los Caballeros, Dominican Republic, to a Dominican mother and a father of Haitian descent. Her upbringing between Hispaniola’s two countries, which have a longstanding history of tension predicated on ethnic difference, informs her concerns with the politics of place and heritage. She currently lives and works in New York City.