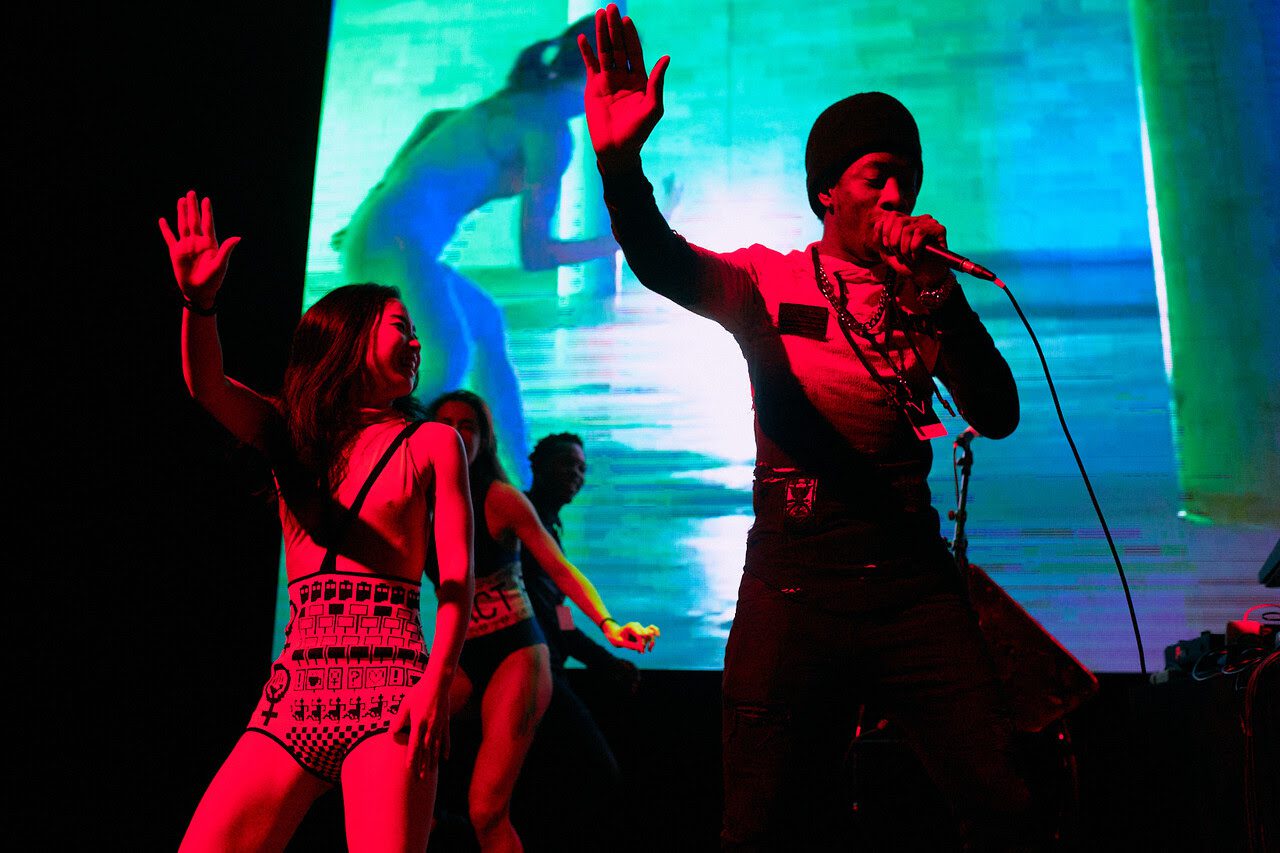 Lamin Fofana, Chuquimamani-Condori & Joshua Chuquimia Crampton, William Basinski, Abdullah Miniawy
Tune is the programme strand that Haus der Kunst introduced in July 2021, it is dedicated to sound and music practices in the realm of contemporary arts. In the months to come, Tune continues with the second cycle of Lamin Fofana’s sound installation a call to disorder in the Terrace Hall: the elegy here lies universality. Fofana continues to work against the grain, against linear time, slowing the compositions down and digging deeper. He opens up new temporalities and takes us into alternative spheres.

The newly commissioned video work Amaru’s Tongue: Daughter by artists Chuquimamani-Condori (Elysia Crampton Chuquimia) and Joshua Chuquimia Crampton enacts a ceremony for their late grandmother. The film documents the ceremony remembering the resistance of the Aymara people, an indigenous nation whose territory overlaps with Bolivia, Chile and Peru, and whose people live today across the globe. The artists will play a concert together and Chuquimamani-Condori will give a lecture to share research on embodied cultural heritage that informed their work.

William Basinski will present his long form mesmerizing compositions, bringing forth the magnificence of time and life. The decades-old analogue tapes he works with create a poignant reminder of the inevitability of decay, while the sublime nature of his sound transcends the material and stretches our perception of the present with infinite loops of drifting reverberant melodies.

For the last residency of the year, Tune will bring Abdullah Miniawy to Munich. An Egyptian writer, chanter, composer and actor, whose astonishingly multifarious artistic work is “an expression of religion, revolution and freedom.” He became a political figure after his poetry was spread around the region in Al Yarmouk, Syria, in Tunisia and other countries during the Arab spring. In 2017 he was forced to leave Egypt by the oppressive regime of Al-Sisi.

Nora Chipaumire, Okwui Okpokwasili
Haus der Kunst’s commitment to live and music as fundamental artistic forms of the present that generate attunement, shape collective experiences and bring together the program continues in October and in November with two productions by Spiel art theater festival.

The opera Nehanda by Nora Chipaumire investigates the legend of Nehanda, a mhondoro spirit, venerated by the Shona people, native to Zimbabwe and central Mozambique. The opera offers a legal and philosophical defense for the first heroes of Zimbabwe’s liberation struggle. The libretto is based on the infamous court case “The Queen vs. Nehanda” (1898).

Bronx Gothic is located at the intersection of theatre, dance and visual art installation. It is a collaboration between director and performer Okwui Okpokwasili and designer Peter Born. Bronx Gothic creates a fictional world, around a young girl’s coming of age. Performer Wanjiru Kamuyu embodies the piece with a new energy. Through a combination of movement, songs and written correspondence, the performance deals with the universal experience of a body in transformation.

Cecilia Bengolea, Michele Rizzo
As part of the exhibition Sweat, artist Cecilia Bengolea presents the constantly mutating performance Oneness (2018–ongoing). Based on the globalized distribution of the Jamaican-origin dance style of dancehall through social media, Oneness creates a choreographic feedback loop between the physical and digital space in which language, medium, and temporality of the dance are multiplied. Cecilia Bengolea in collaboration with Damion BG, Craig Black Eagle, Katrin Wow, and DJ Master Will.

Inspired by observations on the historical connections between religious ritual and collective dance artist Michele Rizzo explores how specific forms of dance reinforce mental states and social formations. In the context of the exhibition Sweat, Rizzo will present Higher.xtn, a performance developed for the Stedelijk Museum in 2018. Synchronized by the repetitive rhythms of an original soundtrack by musician and artist Lorenzo Senni, the boundaries of the individual bodies become increasingly porous and trace a movement of communal becoming.

Jo Penca
With Kreb Core Cargo, a performance that culminates in a multi-week exhibition, Jo Penca—in collaboration with Les Truc—offers a utopian perspective on the relationship between people and the world around them. Jo Penca’s environment-production is about a fictitious ‘crabbing’ of the human body. A transformative process, at the end of which stands the overcoming of existing social structures such as capitalist, species-specific, and sexual repression.

Upcoming in March 2022 Haus der Kunst launches a new live exhibition format that will bring together echoes of themes presented at the museum throughout the year, bringing a special focus to performative arts. Episode 1: Hit by an Echo is about collective experience, and the reflection of energy between bodies. It will highlight the immediacy, intimacy and visceral effect of sound and dance as well as their potential for transformation.