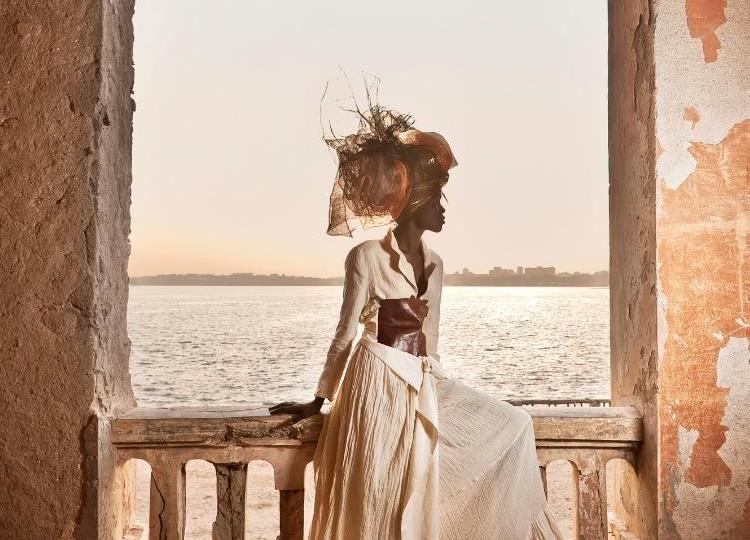 The Magnin-A gallery devotes its two exhibition spaces to women and photography. While the ground floor will show Les Drôlesses * by agnès b. the second space will be dedicated to the captivating beauty and power of the Signares by Fabrice Monteiro.

In Senegal, the emancipation of women, prestige and wealth are measured by adornment. From elaborate hairstyles to shimmering scarves and sophisticated clothing, to embroidered shoes and the tinkling of gold of bracelets, Senegalese women use fashion for socio-political and economic purposes, as well as to celebrate their own history. This is all about Fabrice Monteiro’s Signares series.

The signares (from the Portuguese senhoras) were young black or mestizo women, from the Petite-Côte of Senegal, in the counters of Rufisque (Rufisco) in the 17th century, then of Gorée and Saint-Louis until the middle of the 19th century. This Frenchization of the Portuguese word senhora (lady) originally designates African women who, living in cohabitation with influential Europeans, acquire an economic role and a high social rank. Signares seem to have existed since the end of the 15th century in Portuguese trading posts on the entire western coast between Senegal and Cap des Palmes. This name then applies to any woman who gains a certain notoriety either from her crossbreeding or from her skill as a shopkeeper, often both at the same time.

The signares succeeded during various periods of occupation in resisting the governors and officers who regularly challenged their power and privileges. These women were renowned for their bewitching beauty and their wealth, which they skillfully brought to fruition over time. Between daily coquetry and Sunday feasts, they led independent lives far from patriarchal domination. Even today, the descendants of the signares wield a strong power of influence within society.

Fabrice Monteiro is an Agouda, descendant of Brazilian slaves with Portuguese names. Son of a Beninese father and Belgian mother, he grew up in Benin. After studying industrial engineering, he began an international career as a model, traveling the world and discovering the photographic medium. In 2007 he met the New York photographer Alfonse Pagano and developed his photo studio skills. Passed behind the camera, Fabrice Monteiro’s photos are located at the intersection of photojournalism, fashion photography and the tableau vivant.

“The diversity of my cultures of origin is my first source of inspiration. Relations between Africa and Europe have constantly oscillated between attraction and rejection, empowerment and denial, recognition and anger. They have never been indifferent. . The history of Afro-European peoples in recent centuries, the complexity of which I have inherited right down to my genes, guides all my artistic choices and gives me a unique perspective of lived experience. ”

He makes portraits his favorite medium and, in each of his series, addresses a strong issue linked to the African continent which he addresses through the prism of identity. His latest work “8 Mile Wall” explores the stereotypes that arose during the period of slavery and the colonial era. The series is based on a conversation he had as a child with his father, when he realized that, as a black man, the only way to be treated with respect and consideration in Europe in l he era was to wear a three-piece suit. He deconstructs these automatic thoughts created by aesthetic details, whether they are costumes or accessories.