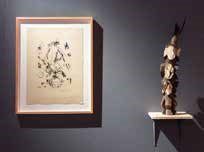 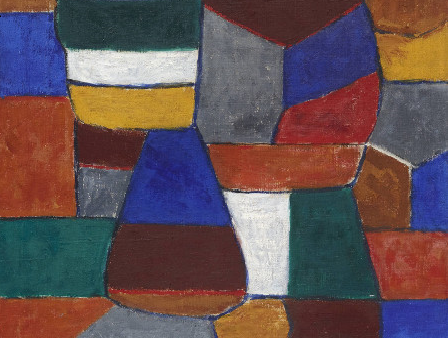 Ernest Macoba: I Shall Dance in a Different Society

The Centre Pompidou continues to shed light on non-Western artists too little known of the general public by presenting South-African artist Ernest Mancoba and Danish artist Sonja Ferlov Mancoba, from June 26th to September 23rd 2019. The exhibition dedicated to Ernest Mancoba is unprecedented, opening up considerable thinking on a landmark figure in the debates on racial marginality and erasure, and more broadly in discourses reframing modernity.

Ernest Mancoba (1904 – 2002) was a French-South-African artist, writer and thinker whose life spanned the whole of the 20th century. A painter, sculptor and draftsman, he is a fascinating and ungraspable figure. After fleeing Apartheid in South Africa, which prohibited him from pursuing a career as an artist, Ernest Mancoba arrived in France in 1938. In 1940, he was sent to a German labour camp due to his British citizenship. During World War II he married Sonja Ferlov, a Danish colleague whom he met at the Decorative Arts school. After the war, the couple left for Denmark for five years where they joined the CoBrA movement through their friend Asger Jorn. CoBrA combined all of Mancoba’s deepest interests since his early years in South Africa: the importance of soliciting the subconscious, the need to “go down down” to society’s spiritual roots, and the struggle to make art universal and not just Pan-Nordic. Mancoba did not remain long with the group, however: his carefully constructed abstraction was disputed, and underlying racism relegated him to the status of an invisible man or “black dot” of the movement.

The exhibition is divided into thematic entry points focusing on specific moments, as well as caught in an ongoing “dance”. “Paint as you feel”, digging into’s Mancoba’s expressive and inner relationship to color, will therefore look at the artist’s involvement in Cobra and beyond. “Spirit over matter” will enhance Mancoba’s longing for spiritual values that would resist the Western modernist canon, owing to the spiritual responsibility of the artist in Africa and to Mancoba’s “Duchampian” fight against the Academy. Starting from his radical ink drawings from the 1960’s, another chapter will stress his endeavor to define “Art as survival” and therefore revive society “to the bone”. The centre of the exhibition will be dedicated to Mancoba’s quest for the human essence through the recurrent matrix of the central figure which inhabited most of his paintings from the 1950’s to the 1980’s. Mancoba’s open-ended quest for an expanded notion of unity will radiate from this centrifugal force, slowly leading the viewer to the ultimate composition of a language based on “reminiscences” echoed in the last room, contemplated as a “memory chamber”.

All chapters are however contemplated as motifs belonging to a unified dance. In 1938, when Mancoba arrived in Paris from Cape Town via London, he decided to learn how to dance and bought a manual to practise in his room near Montparnasse. One evening, a friend took him to the Bal Nègre and invited him to go dancing. He replied, convinced : “I shall dance in another society”. However, in the Elza Miles book dedicated to the artist, Mancoba evokes dance as the ultimate level of communication. A nod to the rhythmic dance undoubtedly at work in the artist’s practice, where the pivotal figure is constantly turning round and round. It is this unresolved tension between historic oppression and humanistic and poetic resistance, between the impossible life and the liberated work of Ernest Mancoba, that the exhibition chooses to address.

A system of contemporary echoes spreads throughout the exhibition. The work of Kemang Wa Lehulere, whose practice has profoundly been infused by the work and engagement of Mancoba, stresses the active role played by erasure and loss radiating from the artist’s work. Myriam Mihindou and Chloé Quenum engage further with Mancoba’s longing for spiritual unity and for the “unspeakable”.

The exhibition is therefore meant to operate as a soundbox allowing different voices: personal archives and writings will be activated (Euridice Kala, Kitso Lelliott, Mo Laudi), while lectures and discussions will also address the complexity of Mancoba’s intellectual and artistic journey. All those experiments will try to communicate with his long- forgotten struggle and unparalleled understanding of art as a tool to « meet man » and reconcile humanity. The research carried out for this exhibition led to revelation of substantial archive material to be gathered in a monographic publication for the fall of 2019.