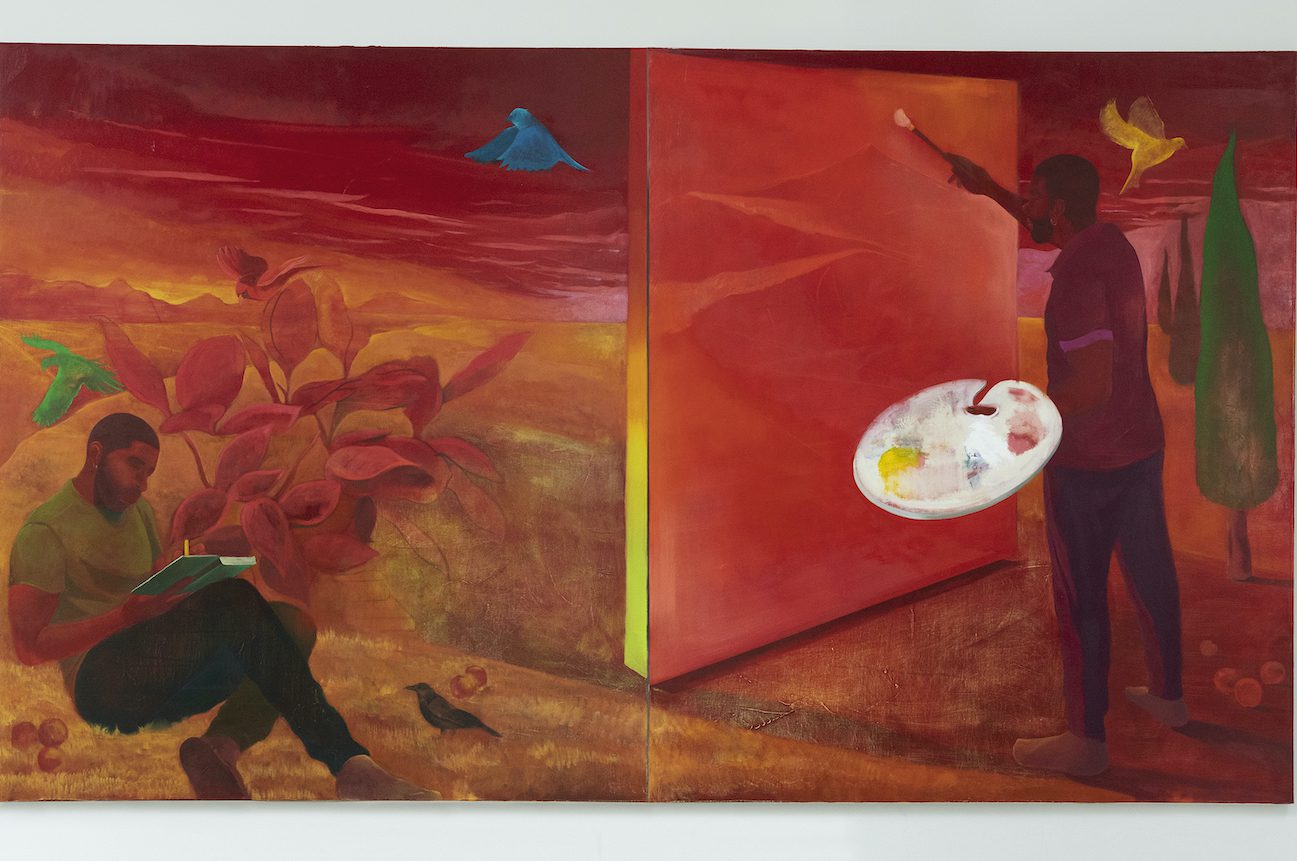 Dominic Chambers: Progress of the Soul

In Turin, from November 18 to December 22, 2021, Luce Gallery is pleased to present the solo show titled “Progress of the Soul” of Dominic Chambers.

Chambers reflects on Black identity and draws upon the tradition of Magical Realism combining references from literary narratives, mythology, and African-American history. Willing to deconstruct negative stereotypes, he represents black figures in moments of contemplation and meditation through reading and leisure within imagined landscapes and introspective atmospheres.

The exhibition brings together large-format oil works and drawings on paper conceived this year that also explore the condition of isolation and loneliness felt by the African-American artist during the experience of the pandemic. The works portray him, even together with the dog and often birds, in unreal domestic dimensions and bucolic views where he traveled with the mind as in a sort of spiritual escapism, which allowed him intimate reflections on himself and his existence.

A frequent motif in his paintings is the raindrop pattern that recalls the concept of the Veil, articulated by W.E.B. Du Bois (1868-1963) in “The Souls of Black Folk” (1903). The intellectual and sociologist describes the double consciousness of the African-Americans caused by the color line that as an invisible barrier separates them from white Americans and forces them to look at themselves through their eyes too, perceiving discriminations.

Some elements characterizing Chambers’ practice are the particular attention to the meanings expressed by the body language of the subjects as well the chromatic choices. Therefore, the featured canvases belonging to the “Primary Magic” series have one of the primary colors – red, blue or yellow – as a base. Considering the theory of the interaction of color by Josef Albers, the artist thinks about a perception of others determined instead by the cultural paradigms and understanding of the context we possess individually.

The exhibition walkthrough video is online at www.lucegallery.com/video.php.

Dominic Chambers was born in 1993 in Saint Louis, Missouri (United States). He lives and works in New Haven, Connecticut. In 2019, Chambers received his MFA from Yale University School of Art, where he studied painting. He has also participated in residencies such as the Yale Norfolk Summer Residency and the New York Studio Residency Program in Brooklyn, New York. Among his recent exhibitions: the solo show at the August Wilson African American Cultural Center in Pittsburgh (2020) and the group shows at the Philbrook Museum of Art in Tulsa (2021) and the Norton Museum of Art in West Palm Beach (2021). The collections of LACMA in Los Angeles and Pérez Art Museum Miami include the work by the African-American artist.