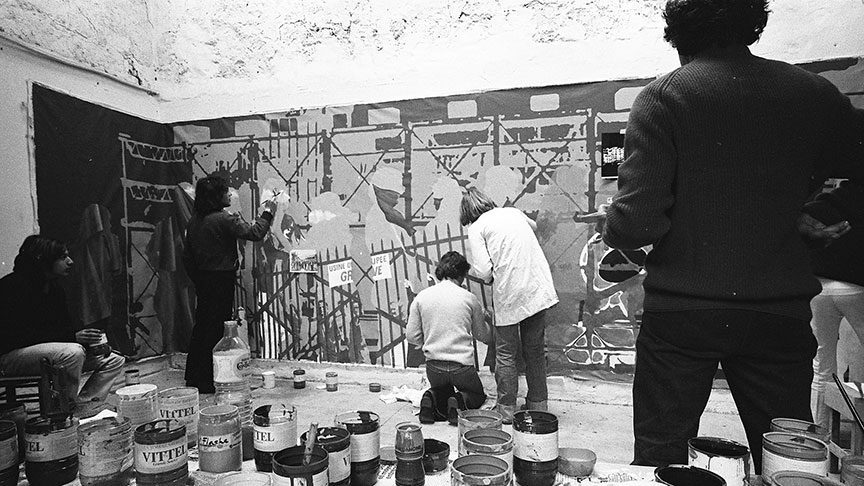 Collectif de peintres antifascistes painting a banner for a protest on May 1, 1976, expressing the artists’ outrage at the government’s policies towards the arts., Photo: C. Lazar
1/2
1/2 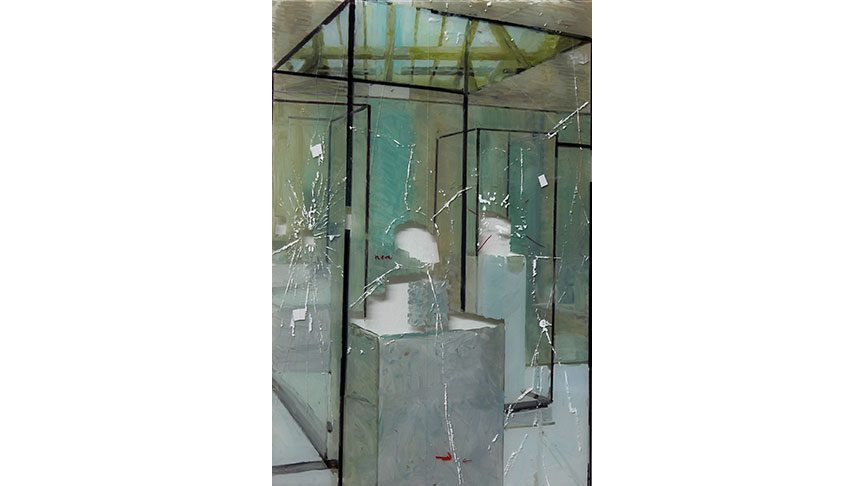 A History of Limits: On the Architecture of Canon Narratives

Collectif de peintres antifascistes painting a banner for a protest on May 1, 1976, expressing the artists’ outrage at the government’s policies towards the arts., Photo: C. Lazar

The critique and deconstruction of the modern canon has shaped both artistic practice and theory over the past three decades. However, the canon is not just an instrument of institutional power. It is also a means to create forms of literacy and historical consciousness. On what basis is it possible to construct and narrate a new canon?

‘A History of Limits’ evolves from the Haus der Kulturen der Welt’s founding mission from 1989 to move beyond the parameters of Eurocentrism and the Western canon. The inaugural conference of the long-term project KANON-FRAGEN interrogates the foundational narratives of modern institutional canons, questioning their architecture and the sources of their authority. Taking as its point of departure the exhibition Past Disquiet. Narratives and Ghosts from the International Art Exhibition for Palestine, 1978, opening simultaneously, the conference moves on to explore conceptions of the modern unconscious and the “hallucinatory” dimension of canon-narratives on the unstable terrain of undead histories.

The conference is part of the multi year project KANON-FRAGEN:

Kanon-Fragen by HKW examines the architectures of historical narratives and the foundations of institutional canon formation. From 2016 until 2019, the Department of Visual Arts under the direction of Anselm Franke will be collaborating with a variety of partners in preparing a series of exhibition projects.

Upcoming topics of KANON-FRAGEN 2016–2019 include a critical evaluation of post-war cultural politics, re-readings of early 20th century classics of canon-building, a multi-venue engagement with the work and legacy of novelist Hubert Fichte, and inquiries into the historical role of alienation in the self-conceptualization of modernity. Exhibitions and discussions will involve curatorial and artistic collaborations with Diedrich Diederichsen, Nida Ghouse, Paz Guevara, Tom Holert, Antonia Majaca, and Dierk Schmidt with Sonja Lau and Su Wei, amongst others.

Also part of Kanon Fragen is the exhibition:

‘Past Disquiet. Narratives and Ghosts from the International Art Exhibition for Palestine, 1978’

In the 1970s, artists across the world mobilized around anti-imperialist solidarity movements. Departing from the 1978 International Art Exhibition for Palestine in Beirut, Past Disquiet stitches a speculative history of networks: grassroots collectives across Paris, Rome, and Tokyo; artists’ unions in Damascus, Casablanca, Berlin, and Warsaw; biennials in Venice, Baghdad, and Rabat, and museums in Santiago de Chile, Cape Town, and Managua. Curated by Kristine Khouri and Rasha Salti, the exhibition engages the problematics of oral history while critically exploring the mechanisms of canon-making.

The International Art Exhibition for Palestine opened in the spring of 1978 in Beirut, Lebanon, at the Beirut Arab University. Organized by the Palestinian Liberation Organization (PLO), it comprised around two hundred donated works by artists hailing from aproximately thirty countries. The exhibition was intended as the seed collection for a museum in exile, taking the form of an itinerant exhibition that was meant to tour worldwide until it could be repatriated to Palestine. During the 1982 Israeli invasion of Lebanon and siege of Beirut, the buildings where the collection was stored, and where the offices housing the Plastic Arts Section and Unified Information Office were located, were destroyed.

Past Disquiet. Narratives and Ghosts from The International Art Exhibition for Palestine, 1978 is a documentary and archival exhibition centered on the research conducted on and around the story of the 1978 exhibition for Palestine. It displays, mediates, and incarnates themes and questions that have guided this research, using montaged video of archival material and film as well as contemporary interviews and writing, in addition to reproductions of documents. It draws cartographies linking constellations of artists and groups bound by political affiliations and solidarities, beginning in Palestine and expanding to the rest of the world. The investigation into other itinerant exhibitions intended as a “museum in exile,” contemporary to the International Art Exhibition for Palestine ‒ such as the Museo Internacional de la Resistencia Salvador Allende and Artists Against Apartheid ‒ has revealed recent, yet forgotten museographic practices, while links to the First Arab Biennial in Baghdad (1974) and the Venice Biennale of 1976 have uncovered other cartographies of a shared history.

The first iteration of Past Disquiet was presented at the Museu d’Art Contemporani de Barcelona (MACBA), from February 20 to June 1, 2015. The second iteration of Past Disquiet, hosted at HKW, will be conceptualized to explore critically the mechanisms of canon-making in both the discourse and historiography of art, in addition to unearthing the relationship between the realm of art and artists’ practices between the Cold War-divided Germany and the causes that animated the anti-imperialist solidarity front, specifically the struggle for Palestine.

Past Disquiet is curated by Kristine Khouri and Rasha Salti. Originally conceived and presented by the Museu d’Art Contemporani de Barcelona (MACBA) in 2015. The Berlin version is a production of Haus der Kulturen der Welt, Berlin, and MACBA. The research for this project has been made possible by the generous support of Rana Sadik and Samer Younis, the Sharjah Art Foundation, the Arab Fund for Arts and Culture (AFAC), ZedGrant, the A. M. Qattan Foundation, and Tensta konsthall.