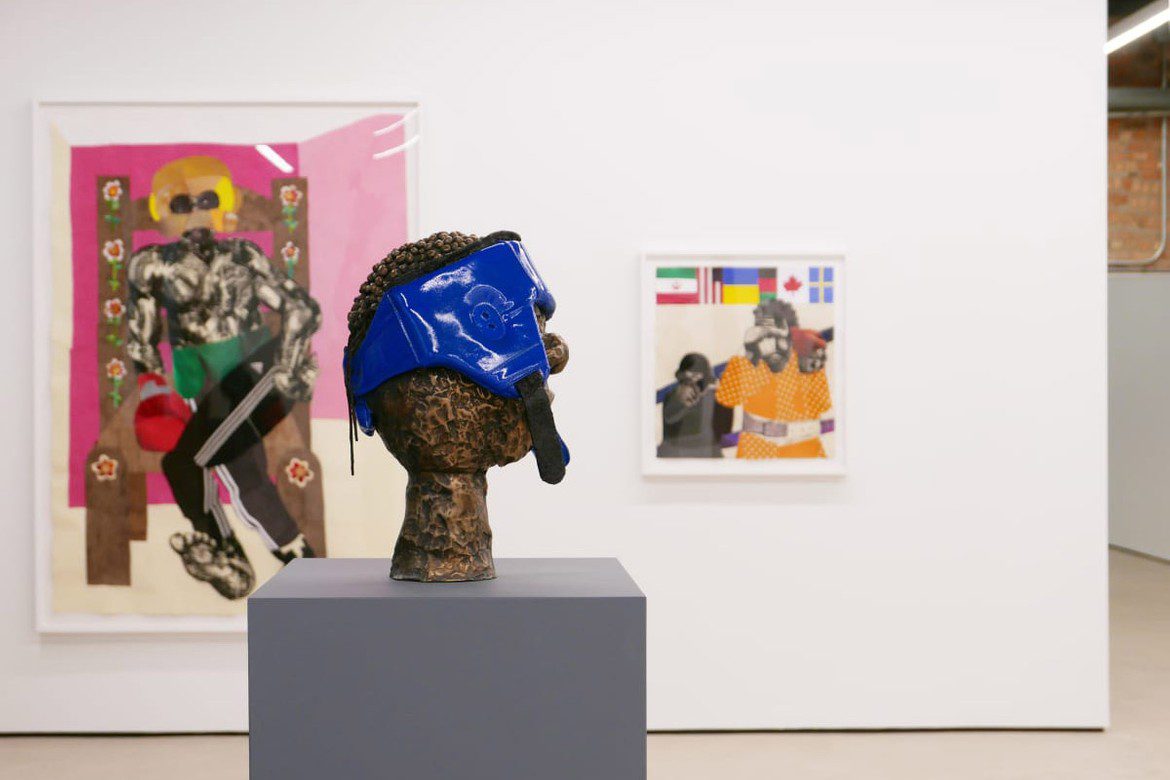 Mariane Ibrahim presents Clotilde Jiménez’s newest body of work, THE CONTEST, from July 11 – August 22, 2020. It will be his first solo show with the gallery. To schedule a viewing please visit the website.

His practice is rooted in conceptions such as the fragmentation of queerness, and in this series, his relationship to his father and athleticism. Through these techniques, Jiménez examines the way the intersection of athleticism and queerness relate to himself as a Black male.

THE CONTEST unravels Jiménez’s own queer imagination to physicality. The works grapple with his deeply personal and once estranged relationship with his father, a bodybuilder and boxer. Jiménez adopts the boxer and bodybuilder as motifs, recalling early ideas of the body, specifically the Black male body.

Placed within each ‘pose’ or boxing ring, the large scale boxers and body builders brawl, their positions mighty, next to bronze sculptures of heads with colorful boxing headgear. He finds beauty in the color and sculptural physicality of boxing headgear and the groin protector that transforms the body into something strong, powerful and guarded.

As a progression of Jiménez’s work, the latest iteration of his colorful collage materials allude to Western culture through the reuse of everyday materials such as wallpaper, popular clothing brand names, magazine clippings and papers of Mexican craft. The materiality of charcoal allows the artist to construct statuesque marble-like figures that make reference to Greco- Roman sculpture, and the ways male beauty has been interpreted through the lens of a Western art historical cannon.

Through physically cutting these materials out, and piecing them back together Jiménez permits the reconstruction of memories by using the material fragments of imagery which were literally part of his, possibly his father’s, and maybe even our own memories.

Clotilde Jiménez is a visual artist, born in Honolulu and based in Mexico City.

Jiménez’s work celebrates the nuances of being a queer and Black hispanic male while exploring the limitations placed on the body in light of race, gender and sexuality. Although the experience behind Jiménez’s work is subjective, a level of universal symbolism is present, ultimately exploring rigid definitions of ‘Blackness.’

The artist emphasizes, “the work became a tapestry of my life that transcribes and reconstructs the societal idée fixe of the black body in popular culture, while also undermining the notions of gender normativity within a black subjectivity.”