Canine Wisdom for the Barking Dog – The Dog Done Gone Deaf: Exploring The Sonic Cosmologies of Halim El-Dabh is a  Prologue for a Tribute to Halim El-Dabh which will be presented at the Dakar Biennial 2018.

For twenty-five centuries, Western knowledge has tried to look upon the world. It has failed to understand that the world is not for the beholding. It is for hearing. It is not legible, but audible. – Jacques Attali. Noise: The Political Economy of Music, 1977

So it’s the energy and vibration that I’m working with. That’s what I want to materialize, with the harps, with new sounds of the orchestras. This is the thing I want to express more, the energy that comes from the frequencies of colors, and how to relate to it and how to materialize it. There’s a huge energy there. It’s always good to work with musicians in an open way, to explore the relationship of color and art to sound and noise and elements of vibrations, to project them, to create a vibration that is positive and in line with the Earth’s positive vibration. Maybe that’s too much to ask for?

You know, the philosophy of ancient Egypt says that everything in life, everything in the environment, has a feeling, and that’s a whole different thinking process than our modern Western one. For them, the sun itself had feelings, and it can reflect back and forth. – Halim El-Dabh. Unlimited Americana: A Conversation with H. El-Dabh, 2017

My earth body returns to hers

Where the earth worm also sings

The organs are sound 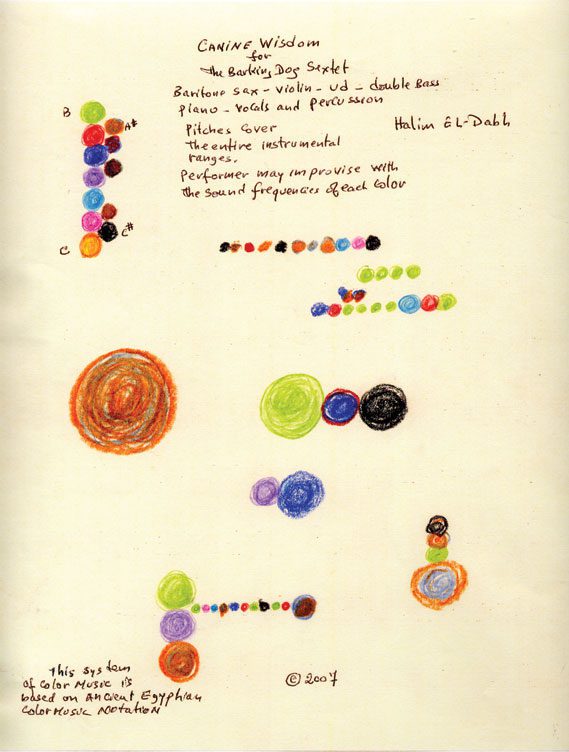 Canine Wisdom for the Barking Dog/The Dog Done Gone Deaf is a research and retrospective exhibition project focusing on Halim El-Dabh’s work – and being – as a composer, electronic music pioneer, ethnomusicologist, researcher, educator and Panafricanist. Our intention is for us young Africans to assume the responsibility of writing our own art histories, by (re)positioning or (re)introducing Halim El-Dabh’s oeuvre in/and on the African continent and the world at large.

The project’s iteration in Dakar is a prelude to an extensive retrospective on Halim El-Dabh’s artistic practice. The exhibition will bring together El-Dabh’s scores, notes, compositions, paintings, theories, color notations, texts, archive materials of performances and listening stations for El-Dabh pieces. Fourteen artists from across the African continent are invited to relate, tribute, get inspired by, reflect on El-Dabh’s practice that spans electronic music, ethnomusicology, compositions for dance and theatre, and sound installations. The artists are also invited to engage with the narrative nature of El-Dabh’s compositions and his interests in allegories, myths and legends like the legend of canine wisdom.

Canine Wisdom for the Barking Dog/The Dog Done Gone Deaf is a spin-off, a twist, an amalgamation that takes its cue from the eponymous album The Dog Done Gone Deaf by Halim El-Dabh, which he performed with The Barking Dog Sextet for the Suoni Per Il Popolo Festival in Montreal, Quebec in 2007. The Dog Done Gone Deaf seems an appropriate entry point into a venture of reflecting on and paying tribute to one of the greatest composers from the African continent and worldwide, Halim El-Dabh, in the framework of Africa’s most important and most consistent art manifestation, the Dakar biennial. The Dog Done Gone Deaf encompasses the musical dexterity, the sophistication and complexity of El-Dabh’s artistic oeuvre that spans a period of seventy years, and reveals the way he integrates allegories, myths and pluriversal cosmogonies in his compositions, in an effort to reflect on and disseminate sonic/ aural epistemologies. This research and sonic exhibition project will seize the chance to deliberate on non-humanocentric relations, knowledge systems and ways of being in the world, as prescribed by the aforementioned album. The exhibition project will also serve as a platform for deliberations on, and experimentations as to what is and where is sound art in contemporary African art, putting a spotlight on transdisciplinary artistic practices between the visual, performative, installative and sonic mediums.

The aim is also to assume our responsibilities of narrating our own histories and defining our own milestones and pillars within a framework of a Pan-Africanist ideology. Our intention is also to re-establish a genealogy of modern arts and sound arts in Africa and beyond, and contemporary sound artists, painters, video and installation artists are hereby invited to relate, extrapolate from, get inspired by El-Dabh’s practice – his compositions, installations, theories and research.

By commissioning new substantial artistic positions the intention of this research exhibition is to reflect and re-engage with the legacy El-Dabh’s work together with sound artists, musicians, visual artists, researchers and sonic archivers from across the African continent. Together with the artists, this exhibition intends to revise the way histories are written, and from what vantage points they are narrated. It is primordial in our times to offer other and complex narrations, genealogies and derivations other than those narrations by those with the facilities and possibilities of power. Only so would we be able to study and appreciate the technologies, experimentations, denotations which El-Dabh implemented early on and through his career as a composer and artist.