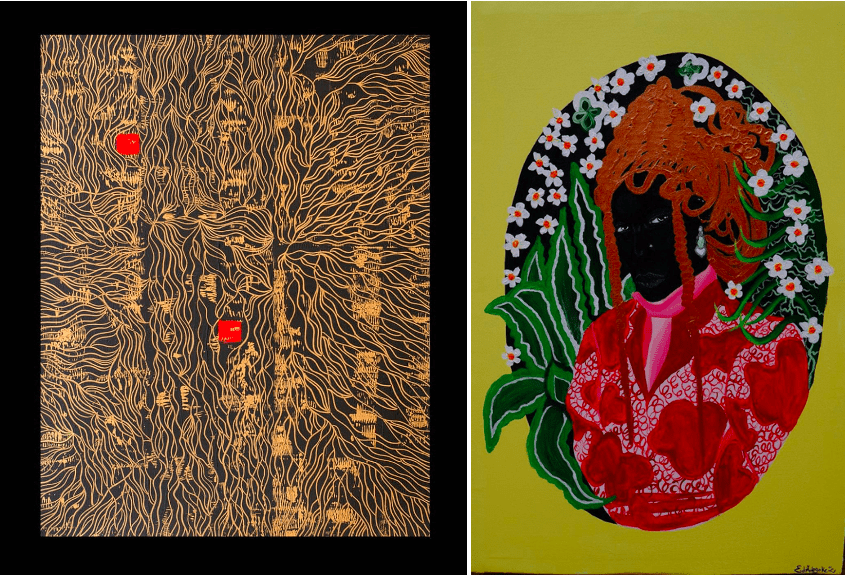 Gallery I:
Busayo Lawal (b. 1976) Life in Asymmetry
For more than two decades, Busayo Lawal has interrogated the conventions of visual vocabularies to challenge received notions of the time-space continuum, migration and power. In his first major exhibition in Nigeria titled Life in Asymmetry, Lawal has created a seminal body of work that is premised on his lifelong obsession with the rich tapestries of aso oke, the ceremonial woven cloth that is unique to the Yoruba people of West Africa and its diaspora. From large scale paintings to drawings on paper, Lawal has repurposed in new and inventive forms the motifs and colour schemes that are central to an ageless tradition.
Life in Asymmetry is Lawal’s artistic statement writ-large. The intricacies of woven cloth and the beguiling patterns that they form tell the stories of craft and purpose, dedication and cultural histories, fortitude and fate. “What makes the man is the story. What makes the story is the man” says the artist, a pithy maxim that conceals enormous complexities, as true in life as it is this new body of work.

ABOUT THE ARTIST
Life in Asymmetry is Lawal’s second solo exhibition since his 2014 show at Pan-Atlantic University, Lagos. Lawal has participated in group projects helmed by the Bruce Onobrakpeya Foundation and Ford Foundation. His works have featured in numerous group exhibitions in Lagos organised by the National Gallery of Art, Alliance Francaise, United Nations Information Centre, the National Council for Art and Culture and Eko Atlantic. He has also participated in other group shows in Abuja at the Greece and Italian embassies. He lives and works in Lagos, Nigeria.
36 Cameron Road, Flat 2, Ikoyi, Lagos, Nigeria | info@ko-artspace.com | www.ko-artspace.com | +234 703 072 8371

Gallery I:
E.D. Adegoke (b. 1998) The Age of Dreams
The works in E.D Adegoke’s The Age of Dreams are conceived in two broad categories: the first set which are formalised poses and less richly decorated than the second set, whose costumed figures suggest an elevation from literalism to the metaphorical. Rather than a calculated approach to centralise the “black figure” in the western canon, the paintings in The Age of Dreams exist in a redoubtable black context, considering Nigeria is the most populous black nation on earth.
These paintings are guided by the formal rigour of portraiture, as well as a creative desire to further foreground “blackness” in the discursive conjectures of art history. They no doubt work to strengthen the history of transformations in contemporary Nigerian portraiture. Adegoke’s paintings function as aesthetic strategies which aim to regularise an extremity of colour and perceptions of it. Hyper-blackness is deployed as a rhetorical tool within the space between realism and representation.
In Nigeria — as in Greater Africa — the contested constructs of power and agency are drawn less along the lines of race and colour, and more frequently dictated by gender and ethnic differences. Even without the friction and weight of race-based ideologies in the global north, Adegoke’s hyper-black figures retain the urgency and importance in relation to self-esteem and self-determination by challenging received notions of beauty, gender and identity.
36 Cameron Road, Flat 2, Ikoyi, Lagos, Nigeria | info@ko-artspace.com | www.ko-artspace.com | +234 703 072 8371

ABOUT THE ARTIST
E.D Adegoke is based in Ogun State, Nigeria. As well as developing his practice as a painter, Adegoke studied Performing Arts at the Olabisi Onabanjo University, Ogun State where he has also worked as an art teacher and resident artist at the Kuta Art Foundation. Adegoke has participated in several group exhibitions at venues such as the Moody Jones Gallery (US), Bogobiri House (Nigeria) and 21 Euphoria Avenue (UK). The Age of Dreams is his first solo exhibition.