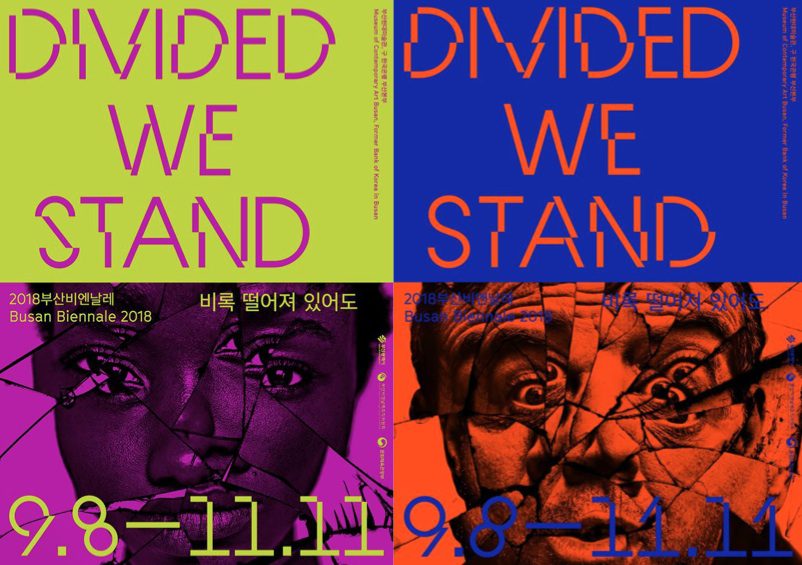 The Busan Biennale reveals the list of artists for its 2018 edition. The 65 participants from 34 countries were selected by Artistic Director Cristina Ricupero, Curator Jörg Heiser and Guest Curator Gahee Park, with the help of an advisory board including Jee-sook Beck, Youngwook Lee, Minouk Lim, and Manu D. Park, as well as further advice from Tarek Abou El Fetouh, Julia Grosse, and Yekhan Pinarligil.

The title of the exhibition, ‘Divided we stand’, reflects the Biennale’s theme, bringing together work by around 60 artists responding to the question of split territories around the globe. What kind of sentiments and conditionings does the splitting of territories induce in people’s minds in general, and artistic minds specifically? Vice versa, what kinds of mindsets induce the splitting in the first place? However, the focus of the exhibition is not just on the documentary or fictional response artists have made to them. Crucially it looks at how souls are inspired, or haunted, by these political divisions. Even in a supposedly post-Cold-War era, it’s hard to ignore the belligerent mood, instigating a whole new level of social and psychological division in many societies, fueled by populist politicians and social media outrage.

The title of the Busan Biennale 2018, ‘Divided We Stand,’ is obviously not offering unconditional optimism or romantic expectations for the future. Yet it’s not apocalyptic either, but an expression of the determination to face reality and to look at the blind spots that territorial divisions have produced. The concise thematic focus of this Biennale bringing together works by around 60 artists also not least is a proposal by Ricupero and Heiser to abandon the megalomania of too many venues, artists and sub-themes that has become the hallmark of many large-scale exhibitions in recent years.

The exhibition will take place at the Museum of Contemporary Art Busan and the former Bank of Korea in Busan. The two venues reflect the biennale’s theme: at the newly opened museum, the main focus is the Cold War era and its uncanny return in the present, while at the former Bank of Korea building, alternate futurist scenarios will unfold, looking at our current state of being through the lens of science fiction. The exhibition architecture for both venues has been designed by mnlp architects (Seoul/London).