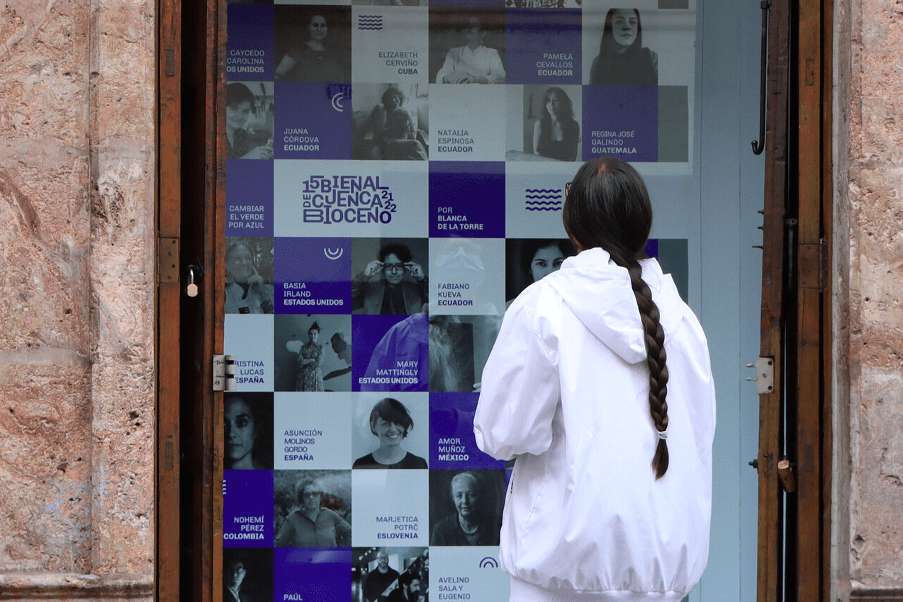 Biennial of the Biocene: Change the Green to Blue

Courtesy of the Bienal de Cuenca.

The 15th Biennial of Cuenca, Ecuador, will address issues derived from the climate and ecosocial crisis, based on three lines of thought:

Ancestral and traditional knowledge, rescuing the tradition of communities and indigenous wisdom and is attentive to biocultural knowledge: cultural traditions associated with biodiversity, with a special focus on the surrounding context.

Critical ecofeminism, a section which links to the previous one regarding the recovery of knowledge about the pachamama, as well as ecodependence and intercultural learning as a way to improve all cultures.

“Escenarios futuribles” will focus on art becoming an effective vehicle to build futuribles—probable and possible futures—fueled by the speculation of utopias and alternatives.

The subheading, “Cambiar el verde por azul” (“Change the Green to Blue”) alludes to greenwashing, a practice that has appropriated the color green. The water we are depleting is not green, nor are the territories devastated by extraction policies and anthropic action. Environmental racism, the loss of biodiversity, corporate colonialism… are part of an environmental narrative, much more vast than the one that made us believe in green as the color of ecology.

To approach a sustainable biennial, framed by these lines of thought, the first action was to reduce the number of participating artists; fewer spaces and all close to each other. The intention is that no visitor would have to take any means of transportation to visit the venues, so as to enjoy the visit on foot and spend more time at each project. It seeks to escape the indigestible biennials, where there is never time to see everything, and they respond to a frenetic rhythm. In addition, 70% of the selected artists are woman, the highest percentage of female artists compared to previous editions of the Biennial of Cuenca.

Sustainability guidelines
From the beginning, a number of guidelines have been established to care for the ecological footprint throughout the life cycle of the project. The shipment of artworks has been reduced to a minimum; most will be produced on site, prioritizing local materials and processes that respect the environment. The focus has been on collaborating with artisans and working with the comunity, avoiding polluting materials and reusing display devices. A waste plan has also been developed and most of the materials will be donated to communities—wood, metals, fabrics, structures—and the few that are going to be discarded will be biodegradable.

Importance is given to the invisible processes, as the Biennial is not interested in creating a façade artistic event, rather one that really represents a change of paradigm and a transition to other ways of producing and consuming culture and knowledge. After centuries of consuming the planet, it is time to build the planet.