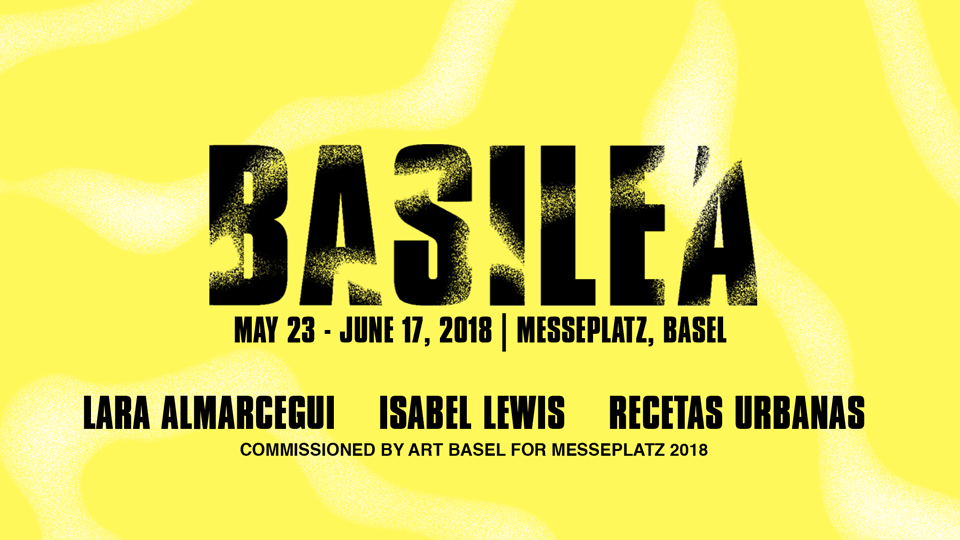 What makes a city?

Basilea invites us to reflect on a city’s possibilities through a series of immersive projects connecting the City of Basel, its residents and the 95,000+ fairgoers anticipated to attend Art Basel. Conceived by artists Lara Almarcegui, Isabel Lewis and architecture studio Recetas Urbanas led by Santiago Cirugeda, Basilea is a project by Creative Time, commissioned by Art Basel for Messeplatz that will open May 23, and culminate the week of Art Basel, June 11-17. This will be Creative Time’s first international public project and the first collaboration between the artists.

Basilea aims to create awareness of the active role we, as citizenry, have to intervene and alter any given urban environment, at an individual and collective level, encouraging discussions about the use and ownership of public space. The project includes a collectively built structure, a large scale installation, a series of workshops, events and occasions.

In the three weeks preceding Art Basel, Recetas Urbanas led by architect Santiago Cirugeda, will work with local and international volunteers to collectively design and build a multi-purpose civic structure, using locally sourced and second-hand materials. Participants are invited to learn from and teach each other in a collective exchange and collaborative experience. During its construction and upon completion the civic structure will be open to all and activated by programs and performances. Following the close of Art Basel, the structure will be relocated and given to one of the local organizations that participated in its construction, extending the significance and utility of the project long after the fair is over.

During the week of the fair, Lara Almarcegui will orchestrate a large scale installation of gravel deposits from an active quarry that will surround Recetas Urbanas’ civic structure. Growing daily in increments mirroring the average volume of gravel extracted from a Basel quarry, the work serves as an invitation to reflect on the consequences of our extractive relationship to the land. In conjunction, Almarcegui will create a guide to Basel’s abandoned quarries through a map connecting these ‘wastelands’ now awaiting a new function.

Drawing upon her training in cultural criticism, dance and philosophy Isabel Lewis has conceived a series of workshops and occasions engaging the public through new modes of addressal, inviting us to rethink notions of ‘self’ and ‘community’. The work facilitates spaces for experimentation and play, where members of the public determine their own trajectories and level of engagements. The public workshops which will take place on the Messeplatz in the weeks leading up to and continuing through the week of the fair function as a meeting point for practices that in Lewis’s view can form specific and intimate relations with urban space. What evolves out of this process constitutes the foundation of a large scale public choreography that highlights centuries-old, living traditions specific to Basel and generates encounters between such historical practices and contemporary forms of bodily engagement.