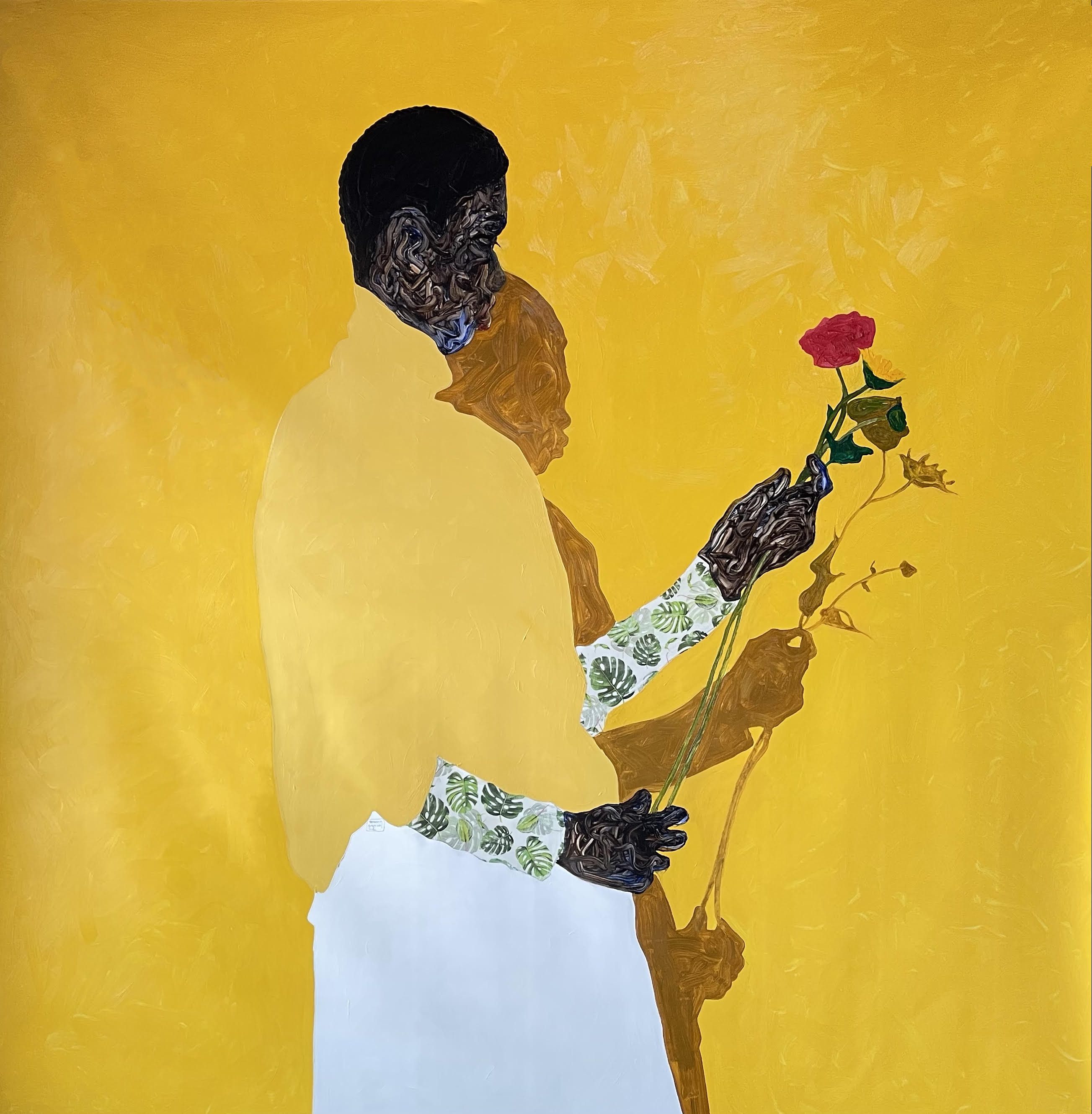 Roberts Projects  announces “Singular duality: Me can make we,” a solo exhibition by Amoako Boafo featuring new large-scale paintings that explore the tension of internal and external worlds, and of the complexities of shadow and light.

Boafo’s second solo show with the gallery expands on his oeuvre representing and celebrating Blackness, while introducing significant new themes. Situated at a pivotal juncture between the artist’s celebrated mode of figuration and the development of a complex visual language, these magnificent new paintings introduce the subject’s shadow. At once connected yet separated, Boafo’s characters are enigmatically coupled with their shadows. In each of Boafo’s newest paintings, light now casts a shadow, which becomes an image in its own right. Dark and light do not fuse into one another; rather, they oppose one another. The visual tension, specifically the shifts between positive and negative space, is a departure from how subjects were previously painted in even illumination. Boafo’s limitless diversity – as it relates to both his characters and himself – continues to prompt discussion on the complexities of identity, community, and race. Depicting people both within and outside his intimate circle, Boafo’s characters occupy the dominant space of each composition. Domestic settings and relaxed poses grant further insight into Boafo’s relationships with his characters.

Boafo’s painting is, at its core, a highly personal record of his and our existence during an extraordinary time. The desirous combination of yearning and deluge reflects on his and our moment: the coronavirus pandemic and its fallout; the impact of racial inequity; the effects of fame; balancing daily life; an uncertain, troubling future. With this show, he expands from superb Black representation to portraits that chart and encompass the totality of the human experience.

Portraying individuals from the Diaspora and beyond by highlighting self-perception and beauty, Amoako Boafo invites a reflection on Black subjectivity, specifically of its diversity and complexity. His portraits are notable for their bold colors and patterns, which celebrate his subjects, as a means to challenge representation that objectifies and dehumanizes Blackness.

Born and raised in Osu, Accra, Ghana, Amoako Boafo studied at the Ghanatta College of Art and Design in Accra in 2007, before attending the Academy of Fine Arts, Vienna, Austria for his MFA. Boafo was awarded with the jury prize, Walter Koschatzky Art Prize in 2017 and the STRABAG Art award International in 2019 both in Vienna, Austria. His first solo exhibition in the United States, entitled “I See Me,” opened at Roberts Projects in January 2019. Boafo was the first artist-in-residence at the inaugural Rubell Museum in Miami, FL, which launched in 2019, organized through Roberts Projects. In 2020, the artist collaborated with Kim Jones, Dior Men’s creative director, for Dior’s Spring/Summer 2021 Men’s Collection. In 2021, Boafo was selected by the Uplift Art Program to create the inaugural “Suborbital Triptych” on the exterior panels of a Blue Origin New Shepard rocket.