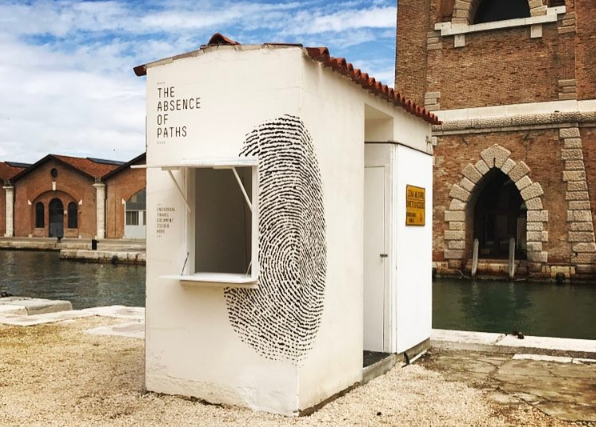 Installation view of 'The Absence Of Paths' in Venice, image via #TheAbsenceOfPaths
1/1
1/1

Installation view of 'The Absence Of Paths' in Venice, image via #TheAbsenceOfPaths

This year Tunisia participates again at the Venice Biennale, it’s the first participation since 1958. The project will not include artists but individuals with firsthand experience on migration, issuing travel documents for visitors at different locations around town.

The Absence of Paths is a human performance staged across Venice which, for the duration of the Biennial, represents an idyllic microcosm of the world: a place where human beings may still flow freely from one nation to the next. This is represented in a physical travel document called a Freesa, produced with the help of Veridos, a leader in producing secure identification papers for countries and companies around the world.

Freesas will be issued at three locations both inside and outside the perimeter of the Biennale: the Navy Kiosk, a historic outdoor checkpoint which was used by the Navy to control access to the Arsenale shipyard, located on across the China Pavilion, a central issuing centre in the Sale d’Armi building inside the Arsenale, and a 19th-century municipal kiosk on Via Garibaldi between the Arsenale and the Giardini. Together, they will create a triangular pavilion.

This installation will empower each and every visitor towards shedding the divisive baggage and classifications imposed upon people. The carefully developed collateral event, at the heart of the pavilion, will form the basis of a silent, individual protest.

Should they choose, all participants will retain the flexibility to significantly, albeit creatively, amplify their dissent, as they continue their journeys through Venice and beyond.

In addition to visitors from across the world, The Absence of Paths will leverage the active contributions of young aspirational migrants. Their passage to the Biennale by virtue of being part of an artistic practice at an internationally recognized contemporary art event will highlight contemporary art’s status as a global phenomenon, one which maintains the ability to inspire debate and inquiry.

3rd Kiosk on the corner of via Garibaldi and Riva Dei Sette Martini, 30122 Venezia Via Giuseppe Garibaldi, 1648 30122 Venezia, Italy

During the vernissage (May 10th-13th), there will be a series of performances. Each act is set against a soundscape of unique musical recordings of fading music traditions in Tunisia. These anthropological recordings are a compilation of seven years of research across Tunisia, from Mednine, Kasserine, and Dembla to Khness. For the Arte Biennale 2017, the artists have focused on music from the rural towns of Ghomrassen and Guermassa in the southwest of Tunisia. This music, sung by naked female voices without musical accompaniment, was generally sung during marriages, and are a testament to the preservation of traditions through the body. Several rhythmical instruments, including the tbal and ghayta played specifically by men in Guermassa, are interwoven with the vocals. Both of these musical traditions are disappearing as people migrate out of these villages, leaving behind towns deprived of both people and sound. These rural recordings are fused with conceptual electronic sounds creating a new style that highlights both Tunisia’s past and its future.*

Poetry at Via Garibaldi, Wednesday May 10th at 10:30
Liliya Benromdhane with Nikolaos Symeonidis

Please check the website as new performances will be scheduled throughout the duration of Arte Biennale 2017.