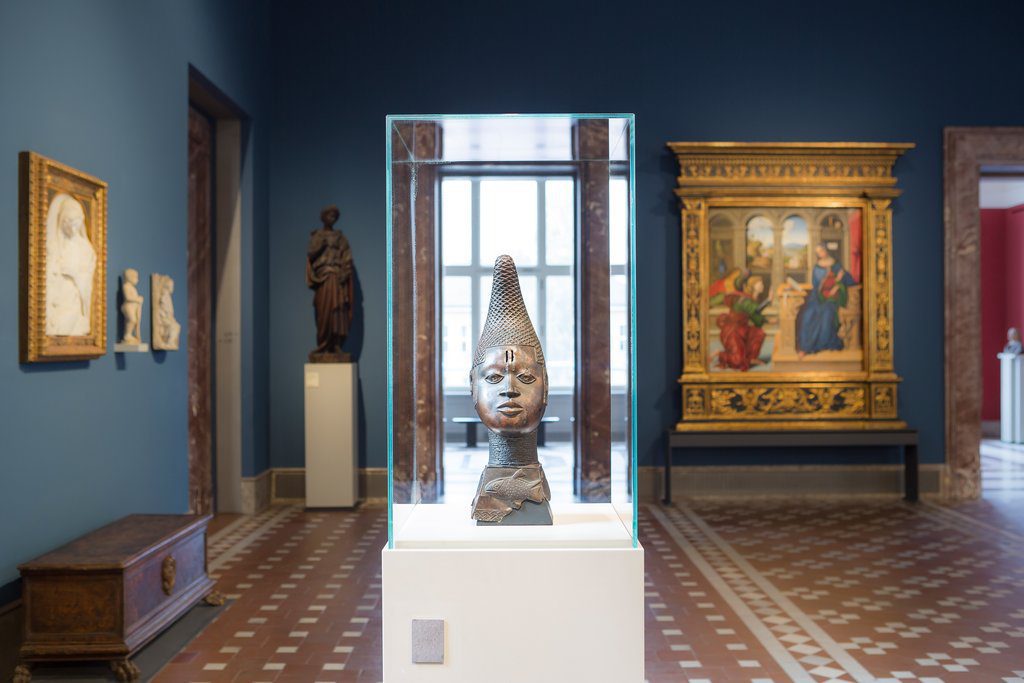 The Restitution of African Cultural Heritage. Toward a New Relational Ethics

The First Reactions to the Report on Restitution of Looted Art

In November this year, a report written by Bénédicte Savoy and Felwine Sarr evaluated the urgent need for restitution of looted African artifacts held in French museums. Commissioned by French President Emmanuel Macron, the 108-page report lays out some steps for the long-awaited restitution. Eric Otieno looks at the major conclusions from the groundbreaking report and comments on positive and negative reactions from European cultural institutions so far.

Europe’s cultural sector is still reeling from a report presented to the French president Emmanuel Macron last Friday. The report entitled The Restitution of African Cultural Heritage. Toward a New Relational Ethics was commissioned by Macron as part of his efforts to jumpstart political discussions around the repatriation of cultural heritage.

The prominent scholars Bénédicte Savoy and Felwine Sarr were tasked with looking into the restitution of African cultural heritage currently held in various French museums. The president’s actions are a watershed for French relations with its former colonies, having brought a marginal issue to the center of the political agenda. Other former colonial powers such as the UK and Germany have followed events with guarded anxiety, seeing as they could be next in line in what could become a landmark precedent for restitution policy worldwide.

Even so, it is not the first time that the restitution of cultural heritage is being discussed in high places. In the late 1970s, UNESCO director Amadou Mahtar M’bow argued in a seminal essay that global cultural heritage should be rebalanced between the Global North and the Global South, emphasizing the legitimacy of restitution claims. Savoy and Sarr draw on this discussion, raising an important concern as a result: Why do we find ourselves back at the drawing board after significant efforts in reaction to M’bows essay were already underway four decades ago?

From the onset, it is clear that the discussion in the report goes beyond the restitution of cultural heritage. Rather, it is about unraveling “a system of appropriation and alienation – the colonial system – for which certain European museums unwillingly have become the public archives”. Restitution is defined simply as all efforts “to return an item to its legitimate owner”. For the authors, to address restitution is to address “justice”. Restitution is understood as a “re-balancing,” “recognition,” “restoration,” and “reparation” that transcends return or repatriation. At stake is the establishment of “new cultural relations based on a newly reflected upon ethical relation” resulting from “a profound reflection on history, memories and the colonial past”. Throughout, the authors straddle the line between the restitution of artifacts per se and the symbolism of restitution for a wider shift in relational aesthetics and politics between the Global North and the Global South.

The report begins by a describing the long duration of losses in African history before setting the stage with part one, which tackles restitution by defining the term and addressing its ambiguities. The memory and amnesia of loss and the “life and spirit of objects” are also discussed here. Part two delves deeper into restitution as praxis, addressing in concrete terms the historical forms of dispossession and the collections which they are likely to have ended up in. This part also proposes criteria for restitutability, as well as a timeline for a possible program for restitutions whose first phase runs through the end of 2019, and whose open-ended last phase will begin in 2022. The third and final part discusses juridical aspects and the current impasse around restitution. The authors propose a juridical apparatus that could be applied, how restitution could be financed, and who it should be directed to. The annex gives a brief insight into the authors’ methods and into some inventories, most notably that of the Quai Branly – Jacques Chirac Museum which hosts an excess of 70,000 African objects listed by country.

Critics of the restitution project have raised the issue of “empty” French museums and the misguided concern that Africans – by virtue of their African-ness – are going to mess everything up. However, the idea of empty French museums adds nothing to the restitution debate. Instead, it serves to derail attention from the various empty Museums on the African continent whose collections “reside” abroad. Putting aside its speculative nature, the fear of African mismanagement on the other hand reveals the limits of Western museum culture. As Savoy and Sarr rightly point out, many of these objects fulfilled a religious or customary function that is far removed from their current status as artifacts in a museum. Restitution might therefore involve a decentralization of the objects which is antithetical to the glass cabinets of the Western museum. The idea that repatriation can only occur between France and museums on the continent is conceptually lazy at best if one recalls that the objects were not taken from a museum. The future management of African cultural heritage by African countries will be a challenging process, but that cannot be an argument against restitution.

A paradoxical experience awaits African readers. On the one hand one might be happy to see that heritage has been preserved and documented so well. On the other hand, it is easy to feel anger at the audacity of the French, to feel patronized at the realization that one really has no idea about the wealth and depth of one’s own history. One is simultaneously in awe of the intricacy of the colonial machine, and resentful of its violent arrogance. One feels duped and excited, sad and hopeful, scorned and elevated, all at the same time. Few pieces of literature juggle reparative claims, policy recommendations and ontological gaps as profoundly as Savoy and Sarr do in their report. It comes just in time (a few Africans who might remember the loss are still alive) and is long overdue (formal decolonization happened six decades ago).

Reactions have been swift and largely predictable. Tristram Hunt of the V&A, while not wholly convinced by their approach, applauds the authors’ “honesty and clarity”. Hartmut Dorgerloh of the embattled Humboldt Forum in Berlin foreseeably invoked provenance research, mentioning that it “must be established whether injustice was done in the process,” adding that “looted art must always be returned”. Nicholas Thomas of the Museum of Archaeology and Anthropology in Cambridge notes that “empire was certainly violent, extractive and exploitative, but it was also a highly uneven and heterogeneous field of interaction, marked not only by oppression and resistance but also accommodation, collaboration, innovation and interests on both sides in traffic in ideas and objects”. One will certainly be forgiven for thinking the latter refers to a friendly football match rather than the asymmetric incarnation of an ideology of violence that empire certainly was. Either way, Savoy and Sarr offer a rich point of departure for a necessary restitution debate.

Eric Otieno is a scholar, writer and facilitator interested in the intersections between social justice, postcolonial politics, the global ‘order’ and contemporary art & culture. He is a PhD candidate at the Department of Development and Postcolonial Studies at the University of Kassel, Germany, following degrees in Sociology/Political Science (B.A., Frankfurt DE) and Global Political Economy (M.A., Kassel & Coimbra-PT). Eric is also part of the decolonial memory-politics project kassel postkolonial, a commentator on various online/print platforms and contributing editor and content creator at GRIOT mag.