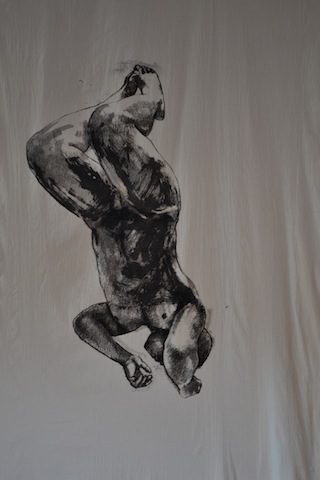 What lies behind the idea of erring?

The Artist as Errant

In an age where video and multimedia installation are the defining media of artistic expression, linocut and screen-print might be viewed as too anachronistic for tackling topical concerns. Vulindlela “Vuli” Nyoni, a Zimbabwe born artist who attained his MFA from the University of KwaZulu-Natal in 2006, challenges this narrative with work that pushes the critical boundaries of print media. In his recent solo exhibition Errant, held at GUS (Gallery University Stellenbosch) near Cape Town in late 2014, Nyoni transcended the technical and aesthetic limits of print. Drawing on the technology of installation art he created a show that addressed a variety of topics, ranging from migrancy to sexuality. Nyoni reflected upon the idea of erring or straying as acts of self-assertion and individuation through two pieces, entitled “Murmuration” and “Icarus”.

Displayed in the main exhibition space, a converted old chapel, “Murmuration” consisted of of nine vertically hung cotton fabric strips each measuring one by three metres. Measuring 11 metres in total, the installation was too long to be shown in a straight line, so it was presented in a rectangular format. “Murmuration” departs from traditional printmaking, both in its monumental scale and walk-in display format, and takes on an almost spiritual quality in the sombre context of the repurposed chapel.

The central motif of “Murmuration” is a huge flock of 5000 starlings flying together in what is known as a murmuration. Each bird in Nyoni’s print installation was individually inked in a complicated process that involved drawing and hand-cutting lino pieces.  Depicted as silhouettes of dipping, swirling and diving shapes, the flock forms a dazzling calligraphy of complex movement that immerses the viewer. The birds take flight together in tight masses that seem to float smoothly, swiftly, effortlessly through the air. According to Nyoni, murmuration typically occurs in the late afternoon as the ambient temperature drops.

Nyoni has studied the dynamics of murmuration, noting for example how the movement of a single bird affects the whole flock and vice versa. Nyoni likens the politics involved in bird flight to human behaviour, and particularly his own social position as an individual in relation to groups. “Murmuration” visually relates Nyoni’s growing unease with crowds, crowded spaces and crowd behaviour. Nyoni says he finds groups disconcerting. “Murmuration” also speaks to broader narratives of global movement and the migration of labour to centres of capital. After all, Nyoni himself is of Zimbabwean origin but now based in South Africa.

The second work on show, “Icarus”, a ceiling-hung mono-print, appears in an adjacent room. The screen-printed work is accompanied by a single black chair placed at the opposite end of the room for viewing. “Icarus” is a self-portrait and depicts the naked artist tumbling through empty space.

The work is reminiscent of Eric Fischl’s controversial ‘Rodin-esque’ sculpture “Tumbling woman” (2002), but without the tragic overtones. In fact, contrary to Fischl’s work, which commemorated the New Yorkers who jumped to their death on 9/11, Nyoni’s print does not share these solemn aspirations. Rather, it offers a personal narrative of deviancy and failure. In his piece Nyoni turns to the old cautionary tale of Icarus to counter society’s restrictive and limiting mores.

In Greek mythology, Icarus, the son of Daedalus, dares to fly too near the sun on wings of feathers and wax. The story begins with the imprisonment of Daedalus by King Minos of Crete within the walls of his own invention, the Labyrinth. Daedalus, a genius craftsman, makes two pairs of wings by gluing feathers to a wooden frame with wax. He gives one pair to his son, cautioning him that flying too near the sun will cause the wax to melt. As they escape the Labyrinth Icarus became ecstatic with his ability to fly and forgets his father’s warning. Icarus plunges to his death in the sea. Artworks and poems lamenting Icarus’ fall are legion. Nyoni, however, views Icarus not as pariah or symbol of arrogance, but rather one of aspiration and willingness to take risks as an individual, regardless of the result.

In “Icarus” Nyoni celebrates his artistic identity as an errant. In this battle of transformation and individuation Nyoni adopts a ‘marginal’ – print – at a time when his peers are opting for what are seen as more up-to-date modes of expression. In an age of grand themes he has also turned inward for personal narratives. However, one also notes that in “Icarus” Nyoni also subtly pokes at the highly charged politics of sexual deviancy within the volatile context of South Africa’s so-called “rainbow nation”.

Errant contains two large-scale depictions of the liberatory possibilities of flight. Where “Murmuration” explores the dynamics of mass movement, particularly focused on group dynamics vis-à-vis personal identity, “Icarus” succinctly comments on the positive aspects of deviancy. Together, the works make a strong argument for print as an aesthetic medium capable of addressing contemporary personal and social concerns.

Vulindlela Nyoni was born in Chilimanzi, Zimbabwe in 1976 and attained a masters in Fine Arts from the University of KwaZulu-Natal in 2006. Apart from being a practicing artist, Nyoni lectures in Printmaking and drawing at the University of Stellenbosch. His main artistic interests lie in the politics of representation and self-presentation as exploration of personal narrative through print media.

Massa Lemu is a Malawian writer and artist.