In Conversation with Nina Chanel Abney

In her debut solo exhibition at New York’s Jack Shainman Gallery last December, Nina Chanel Abney presented a handful of images inspired by memes. Also featuring in Seized the Imagination are a series of largely violent, dislocated images that seem at once both alien and familiar – where the real and the imaginary blur together, as in a dream or nightmare. Syma Mohammed talked to the Chicago native to discuss how she deals with terrible news, creating a universal language for the digital generation, and how today’s ubiquitous violence affects her on a personal level.

C&: Can you talk about the title of your exhibition and what you hope viewers take away from Seized the Imagination? Several of your works seem grounded in the disturbing realities of modern day America and feel anything but imaginary.

Nina Chanel Abney: I came up with the title Seized the Imagination after realizing the very things that drive my work (social media and the news) were blocking my creativity. There was a point when I didn’t want to watch the news – or consume media – hence the title. Then I came across an artist who paints fake self-help book titles, and I was specifically drawn to one that read, “How to Feel How You Felt Before you Knew What You Know Now.” After thinking about Seized the Imagination, my ideation was organic regarding a response to “seized.” 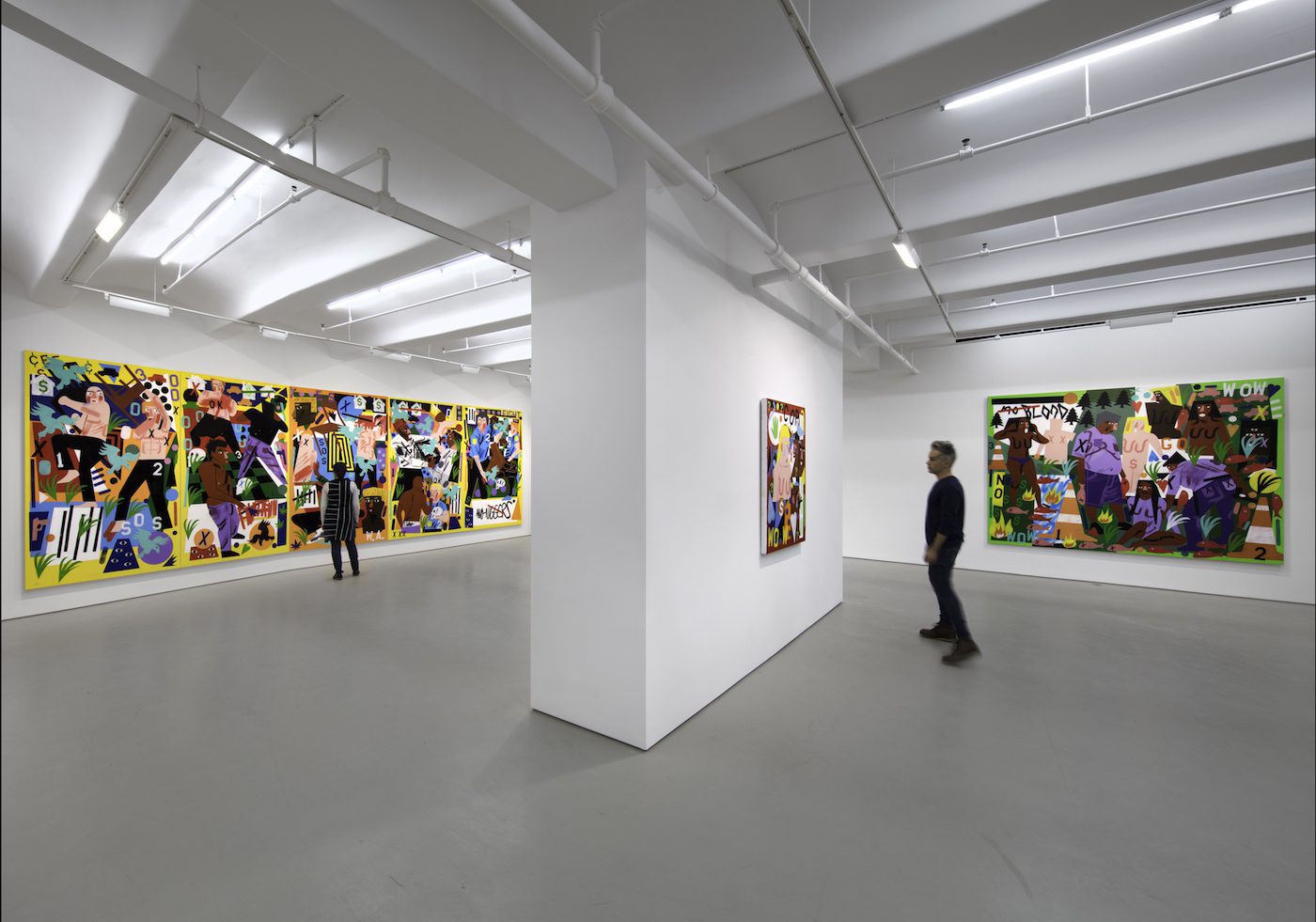 C&: Certain symbols crop up repeatedly in your work, e.g. dollar signs, eyes, Xs, and birds. Others, such as fire symbols, seem new. How do you use those?

NCA: Symbols are as ubiquitous as language, and with the advent of mobile technology and rapid-fire communication, they are shaping up to be a benchmark of communication for our time. I have been especially influenced by emojis and their layered meanings. Someone once said to me that my work is indicative of the digital era that we are embarking upon – and I’d like to think that the disassociated use of letters, numbers, and shapes is akin to a time capsule. I am interested in a universal language – a unifying code that allows for people who would not regularly patronize a gallery or museum.

C&: For some reason the symbols remind me of Egyptian hieroglyphics. Is there any truth or basis to that?

NCA: I think that I often feel that connection to Egyptian hieroglyphics in my public mural works. I am interested in the possibility of people (or whoever the human species has evolved to be) hundreds of years from now randomly coming across my work in unsuspecting locations and feeling like they have discovered something. 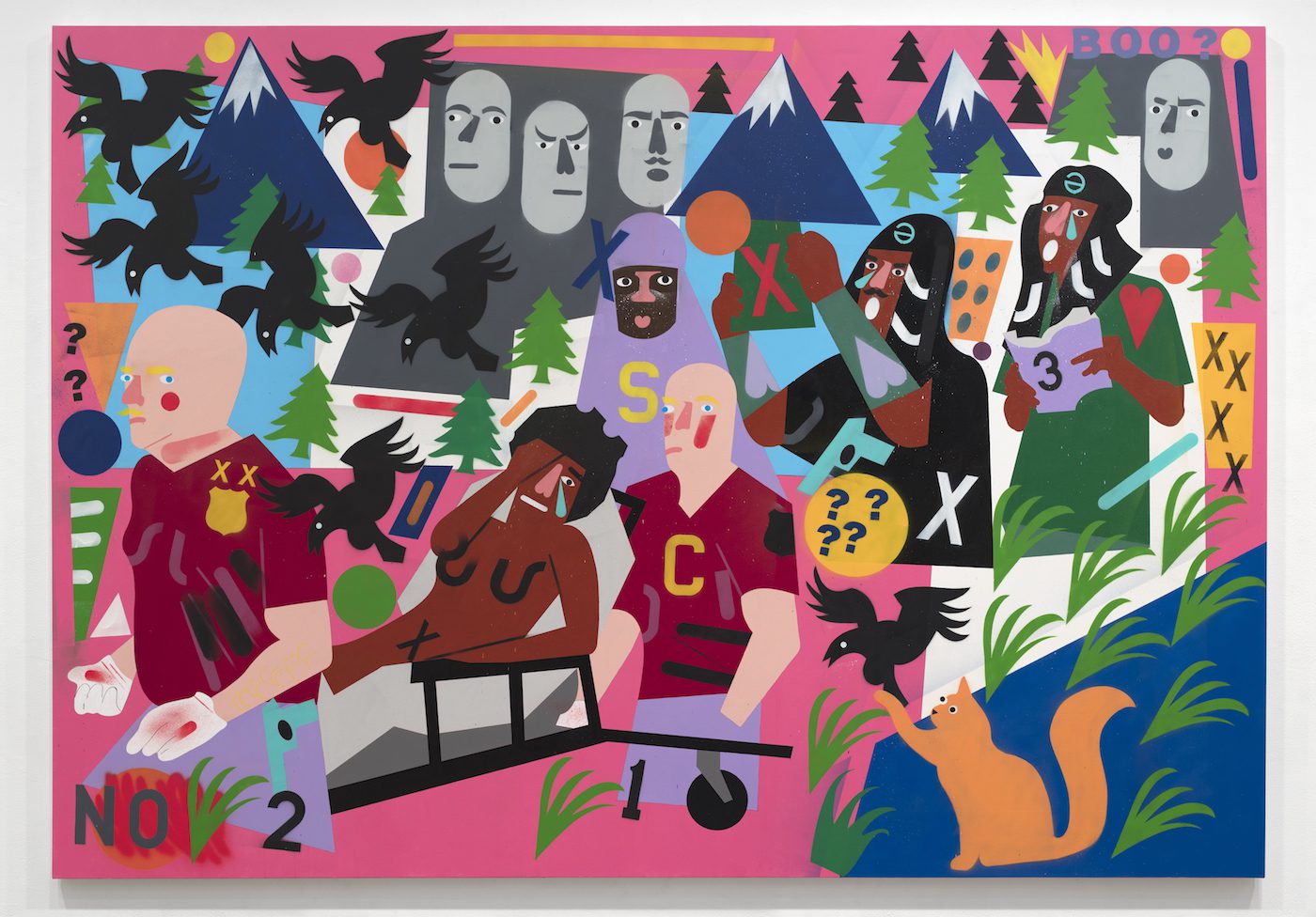 C&: The works Black and Blues and White River Fish Kill seem to be referring to Charlottesville and the Texas pool incident respectively. Can you elaborate on the ongoing theme of racial oppression and violence in your work?

NCA: My work is a direct reflection of the time in which the work was created. And I pull my inspiration directly from the news and current events. Unfortunately, racial oppression and violence is an ongoing theme in our world.

C&: There is a lot of violence in this exhibition whether it is practiced by the state or fellow human beings. How does this affect you on a personal level? Is the process of representing such violence (re)traumatizing? Or even cathartic?

NCA: It doesn’t really affect me on a personal level. Sometimes when I am doing research for a body of work and digging up painful imagery, I can at times become sad or angry, but I wouldn’t necessarily call it (re)traumatizing. I am able to turn those feelings into motivation. I become more inspired to make work that will hopefully initiate some steps towards positive change. I am also able to treat the canvas as a place to purge and process everything I take in (good or bad). The process of representing violence specifically isn’t cathartic at all. What’s cathartic is the process of having a place to put all of the information that I have taken in, and being able to see it all in one place to begin to process it. 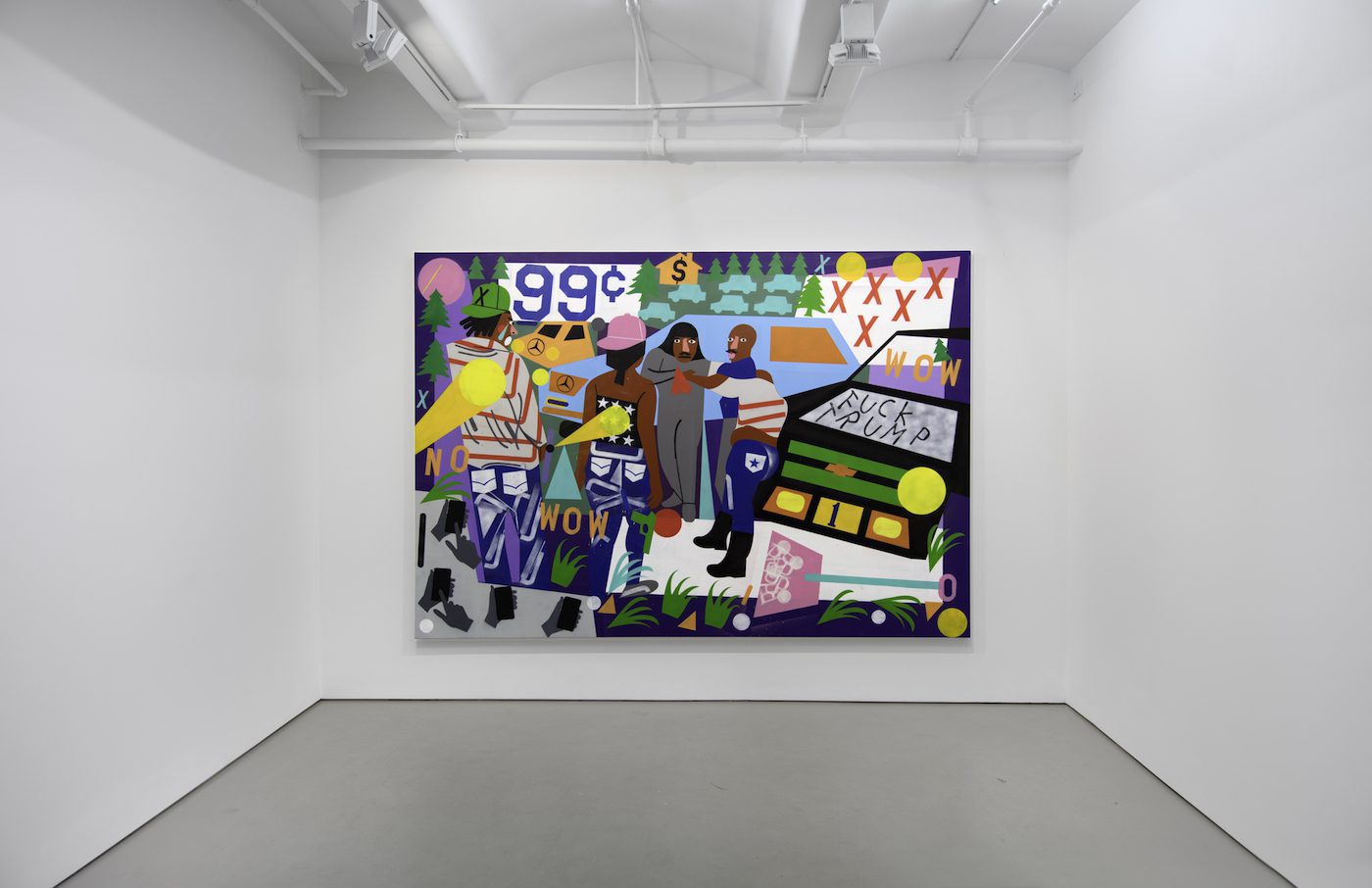 C&: There is a really interesting tension between the gravity of the themes in your work and the rich, bright colors you illustrate them with – which has become part of your signature. Is that a deliberate choice or something that is more intuitive?

NCA: Using a bright color palette is a deliberate choice. Because I tend to deal with rather heavy subject matters, I wanted to find a way to draw the viewer into the work regardless. Also, I noticed that a lot of cartoons such as Family Guy, South Park and The Simpsons can deal with controversial issues pretty effectively because cartoons aren’t “real,” so people have a much higher tolerance for them, so I have deliberately combined my love for satirical cartoons and bright colors to create work that will initially bring the viewer in simply because they may be visually enticed to do so, and once they are in front of the work they are almost forced to engage with more difficult subject matters.

Syma Mohammed is a journalist who is passionate about chronicling the achievements of women and interested in the way art can challenge people’s perspectives and can be used as a vehicle for social change.

Nina Chanel Abney, Seized the Imagination, was on show at Jack Shainman Gallery, New York, in November and December 2017.