A group show: Cornfields in Accra...

Through a Lens of Uncertainty

Our author Moses Serubiri visited a group exhibition in Accra that reflects on the ambiguities of technological development.

At the heart of the large-scale exhibition Cornfields in Accra – a title borrowed from Ama Ata Aidoo’s poem on Ghanaian self-determination – is a towering construction of snail shells rising through the museum ceiling and meeting in mid-air a prototype model of Sputnik 1, the first artificial satellite to orbit the earth.

Donated to the government of Ghana by Soviet Russia in 1981, this floating metallic ball is one of the objects in the permanent collection of the Museum of Science and Technology. Other objects on display include the model of a NASA space craft donated to the University of Ghana, a wooden bicycle, and a hand-made armored car given to president J.J. Rawlings during the Science and Technology Fair in 1981. The snail tower, a work by Livingston Amoako, rises up to the atrium where it meets the Sputnik and a constellation of fragments taken from artworks in the exhibition. The dramatization of a snail tower rising to meet constellations of bodies in outer space celebrates Ghanaian and technological development. This curatorial intervention by Bernard Akoi-Jackson is a radical embrace of the modernist aspirations of the Science and Technology Museum. Amoako’s tower – a reflection on the encroachment on natural resources and habitat – takes on a new meaning of collective and upward movement towards outer space, effectively representing Ghana’s collective upsurge towards modernism.

The exhibition comprises 82 artists and alumni of the art department at KNUST, the Kwame Nkrumah University of Science and Technology in Kumasi, assisted by students in the MFA Curating program. The July vernissage of Cornfields in Accra prefaced the actual harvest of corn in Ghana’s coastal region, of which Ama Ata Aidoo writes in her poem:

“Finally
when we have reaped, gleaned and threshed
our corn, and
roasted it aromatic”

This reaping, gleaning and threshing of corn is visible all through Accra, evidenced by a cornfield on the roadside outside the museum. This cultural celebration is seen also in Jamestown where an annual harvest festival known as Homowo is ongoing in August. Homowo is buoyed by the survival impulse to counter a mythical season of famine, echoed in Aidoo’s poem when she writes:

“Who says we shall not survive among these turbines?”

It is a statement of defiance that reflects the author’s political ambition, and her interest in advocating Ghanaian self-determination.

The celebratory tone of the exhibition is “an optimistic rather than cynical impulse,” according to the show’s curator. But another tone is present among some of the artworks: Many of the artists in the show perceive Ghana and its national and social politics through a lens of uncertainty. The show appears like a survey of urban material – car spare parts, corrugated iron sheets, wooden boxes, synthetic banners, Ghana-Must-Go bags, an excess of polythene and electronic waste. These visual materials reflect urban infrastructural decay, and offer the viewer an aesthetic lens onto the uncertainty of contemporary life. 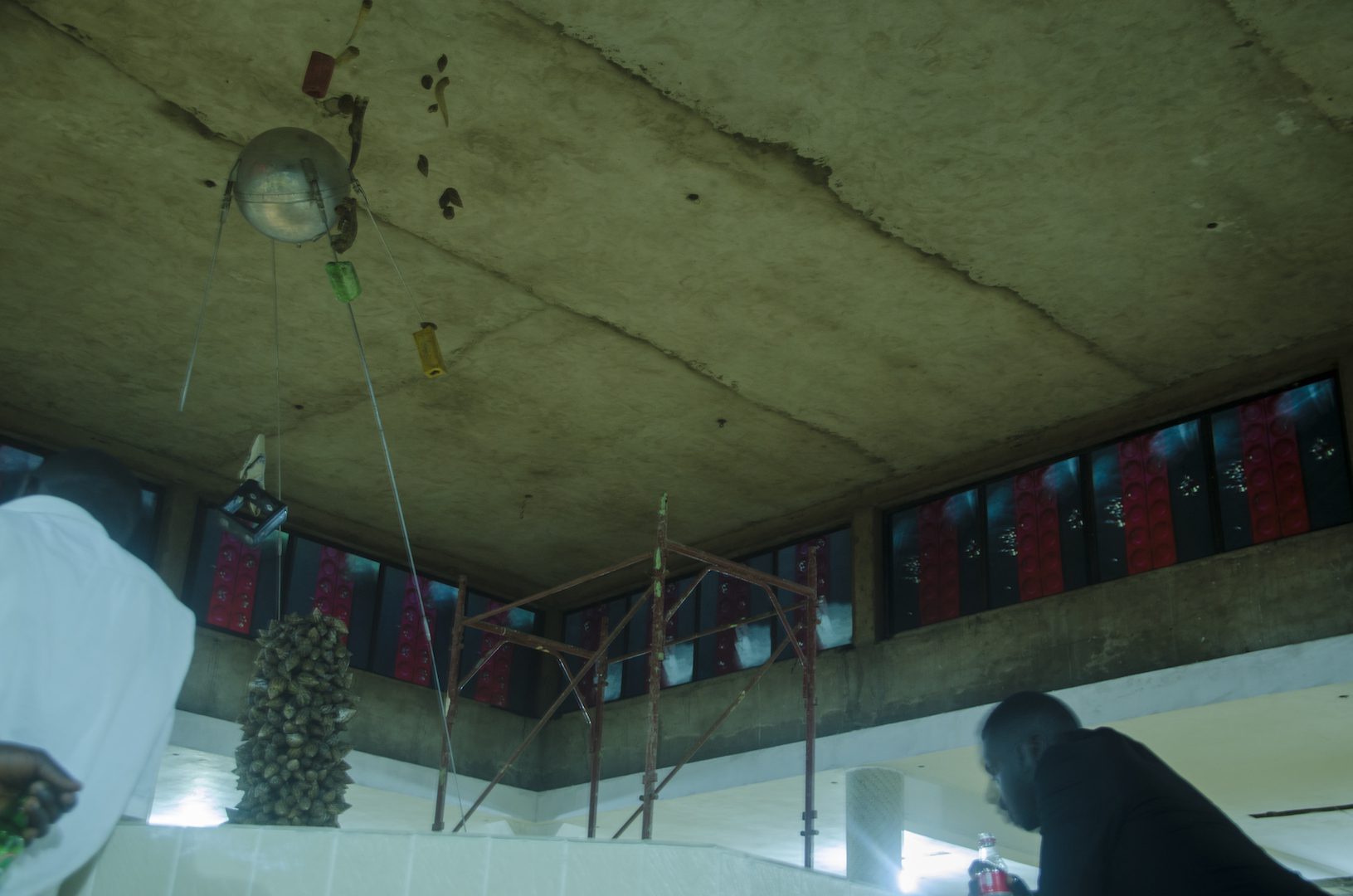 Sputnik 1 model donated to the Museum of Science and Technology in Accra by the Russian Embassy in 1981. Cornfields in Accra, 2016. Photo: Moses Serubiri

A sculptural work entitled Stop Work Produce Permit by Elvis Nsiah consists of several found-objects: Millicent rice bags, discarded handbags, flip-flops and heeled shoes, dog chains, insecticide cans, as well as car tail lights. These items are fitted onto found rusted corrugated iron sheets, giving the impression of a model kiosk that has undergone visceral decay. The work evokes the impact of Ghana’s government policy on informal traders, who are often forced to stop work and are abruptly evicted from the roadside.

Oil features as the fundamental motor of modern life, but also as an arbiter of urban decay. Jonathan Okoronkwo’s Dead Car Series is an on-going project of science-fictional drawings of piles of dead car parts. By using engine oil on plywood, he further emphasizes the decadence of oil and the proximity to junk yards of dead cars in Accra. Earl Davis uses a synthetic banner – a recurring object in the urban landscape – that decays in his installation titled Fragments. Davis abrades the banner by hammering and then dousing it with engine oil, further showing how this substance features in the cityscape.

By contrast, Kelvin Hazel’s video projection on the windows of the atrium resonates with an optimistic impulse. His multi-screen and sequential video projection depicts a neo-traditional attitude to oware, a typical Ghanaian board game made of carved wood. However, by featuring a white glove playing with pharmaceutical capsules instead of seeds, the work offers a general progressive take on the board game, while reflecting on the modernization of medical life in Ghana.

During the month of August, after the harvest, Accra sees the optimism embodied in cornfields throughout the city, as it watches the threshing and roasting of corn on weekdays after work on almost every street corner. In this sense, the exhibition is an extension of the same cultural celebration described in Ama Ata Aidoo’s poem. Yet one cannot escape the glaring reality of the informal traders roasting corn in kiosks, hounded by government officials to “stop work and produce permit.”

Moses Serubiri is a writer, photographer, and curator. Co-founder and editor of The Trans-African, His research interests include urbanity, language, politics, and aesthetics. His essays focus on metaphors for postcolonial Ugandan politics and urban experience.