In the past few months two pioneering female Kenyan artists from different generations have passed away: Rosemary Namuli Karuga and Kawira Mwirichia. We revisit their legacies of feminist and queer art in the east African country.

Rosemary Namuli Karuga was born in 1928 in Meru, Kenya. She was the first female graduate of the Margaret Trowell School of Industrial and Fine Arts, Makerere University (1952) and an art educator in rural Kenya until her retirement (1989), when she became artist in residence at Nairobi’s Paa ya Paa Arts Centre. She was the only woman in Studio Museum Harlem’s exhibition Contemporary African Artists: Changing Tradition (1990), and received a lifetime achievement award from the African Voice newspaper. Her work lives on in several collections, including the Red Hill Gallery, National Museums of Kenya, Murumbi Trust, and the Watatu Foundation. She passed on at the age of ninety-three at the Amberley Nursing Home in Dublin, Ireland where she lived with her daughter.

Kawira Mwirichia was born in 1986 in Nairobi, Kenya. She was a queer feminist, artist, drag Qing, and a dedicated LGBTIQ rights defender who used her creativity to advocate for the rights of both sexual and gender minorities. She held a BSC in civil engineering and was briefly part of a queer collective that held Nairobi’s first publis queer exhibition/celebration, To Revolutionary Type Love, which opened during IDAHOBIT at the Goethe-Institut. She will be remembered for her Kanga Pride series, her Qings and Kueens drag workshop, her Lez Ka-lor lesbian Kama Sutracoloring books, and her dedication to creating safe spaces for queer artists to explore their craft. She passed on at the age of thirty-four on November 2020 in her mother’s home. 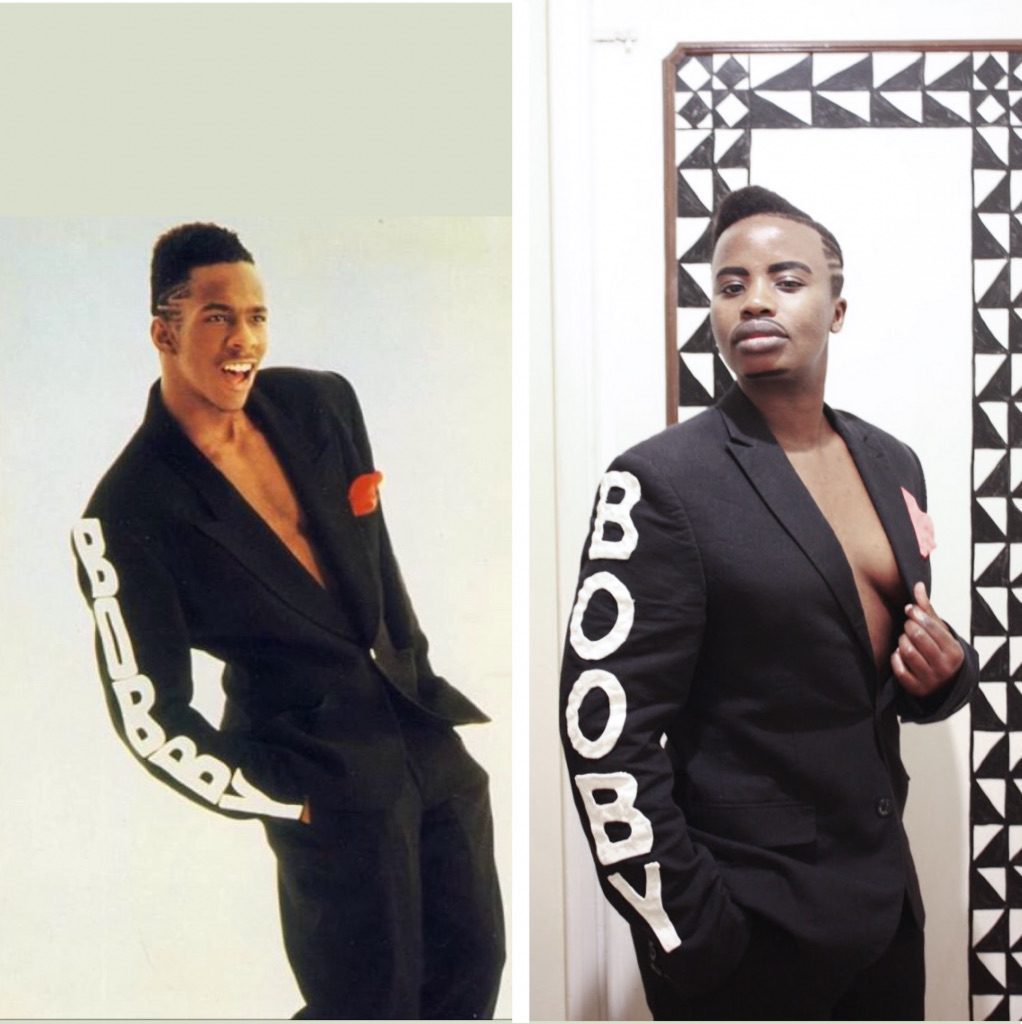 I speak into history the names of these two women, one cared for by her daughter until her death, the other in search of her mother’s warmth in hers, both pioneers in the visual arts whose memories we hope to keep. Rosemary Karuga and Kawira Mwirichia seem to me like two sides of the same coin in many ways. Vital debates about art and the position of the artist in society can be seen playing out in their lives. Karuga’s tutelage under Margaret Trowell, a settler who believed in art for art’s sake, remained present in her work, rural scenes made from foreign magazine cut-outs. Mwirichia’s work tends more toward “artivism,” with overt political Pan-African and social justice inclinations. As I reflect back on Rosemary Karuga’s life I see an arts school that took fifteen years to produce its first female graduate (across two countries), reflecting a feature of the Kenyan art space; female artists are few and far between, queer artists more so.

I also see the gap between Karuga’s graduation and the start of her own art practice, thirty-seven years, as fairly common not only because Kenya continues to be hostile to artists trying to survive through their art, but also because many Kenyan artists either quit formal training or take time away post-degree in order to heal from the trauma. We see this systemic hostility towards the arts in Kawira Mwirichia’s civil engineering degree. 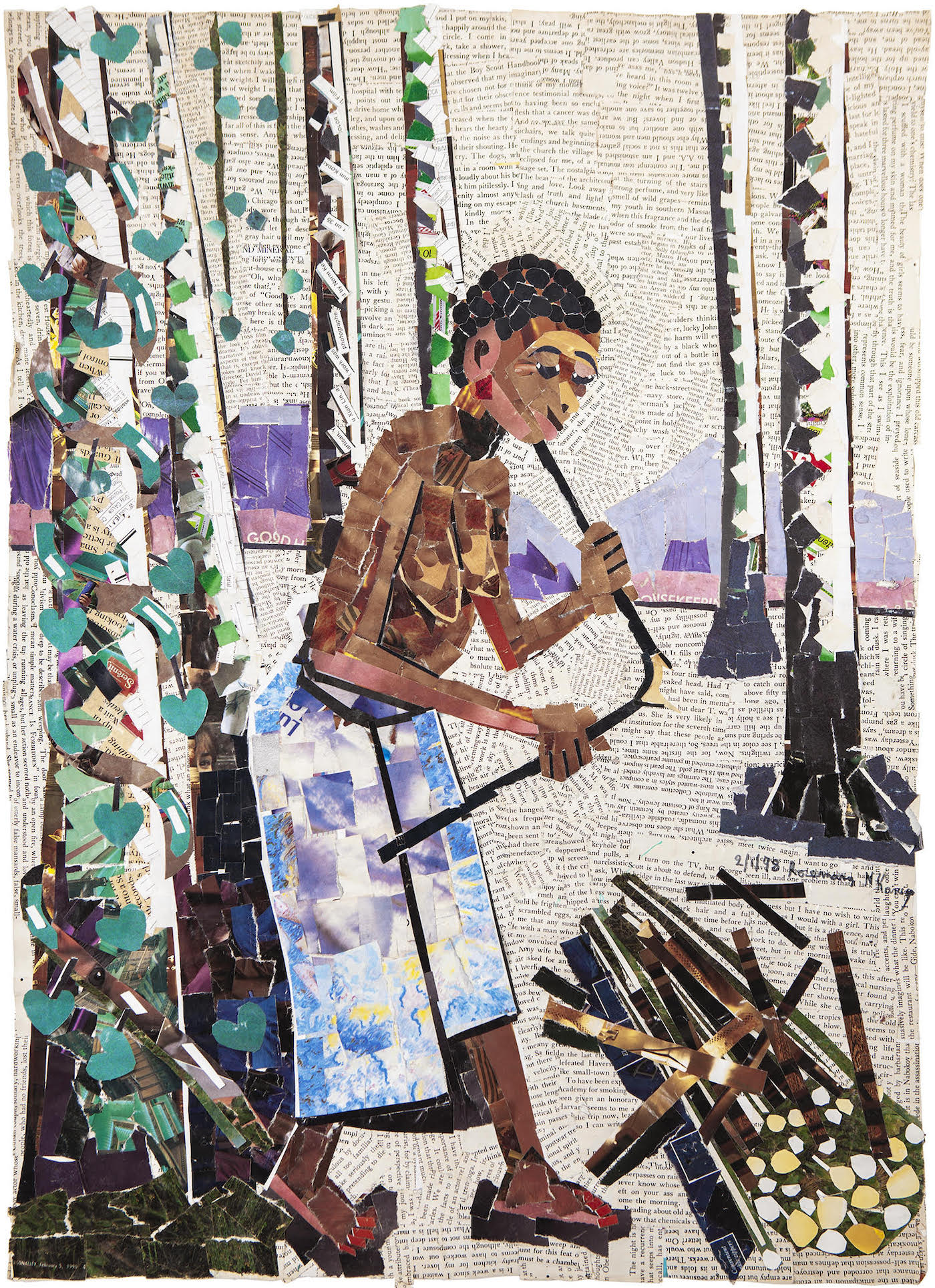 It is important to consider the events of the thirty-seven years between Karuga’s graduation and her art career beyond the scarring caused by formal art training. In 1952, when Karuga graduated, Kenya was in a state of emergency and eleven years away from gaining independence. Trowell’s art-for-art’s-sake approach was pacifist; it stopped the colonial government from using visual artists to produce pro-colonial administration propaganda, but it also stopped her students from creating any overtly pro-native independence work. This silence, this focus on aesthetics would later be used in post-independence Kenya to reify the artist as lazy, unkempt, of no use to society, a pariah who was different and therefore demonizable and dispensable – a colonial tactic.

The arts before independence were heavily curated by the missionaries, colonizers, and settlers. Many art traditions were banned, made taboo, or simply misunderstood. Under the colonial administration each ethnicity was assigned their role in the arts; wood carvers, bead makers, cloth traders, and so on – flattening their rich and complex cultural heritages. These losses, the Kenyan art traditions erased or demonized during colonialism, were carried into the post-colony and compounded through presidents who detested the arts for their freedoms, criticisms, and power to engage the public.

The arts that thrived post-independence continued to be closely monitored by the government, and books were still banned, playwrights arrested or disappeared. Oil portraits of the president were considered the pinnacle of visual art. The artist in Kenyan society, unless sanitized in service of the government, was often a troublemaker, an unwanted commentator the public was taught to find suspicious and incomprehensible. Karuga lived through the ills of colonialism and the horrors of the independence struggle but also the failures of Pan-Africanism and betrayals of the post-colony. She picked up her art again in 1989, three years before Kenya became a multiparty state. It would take ten further years to unseat the dictator, President Daniel arap Moi. 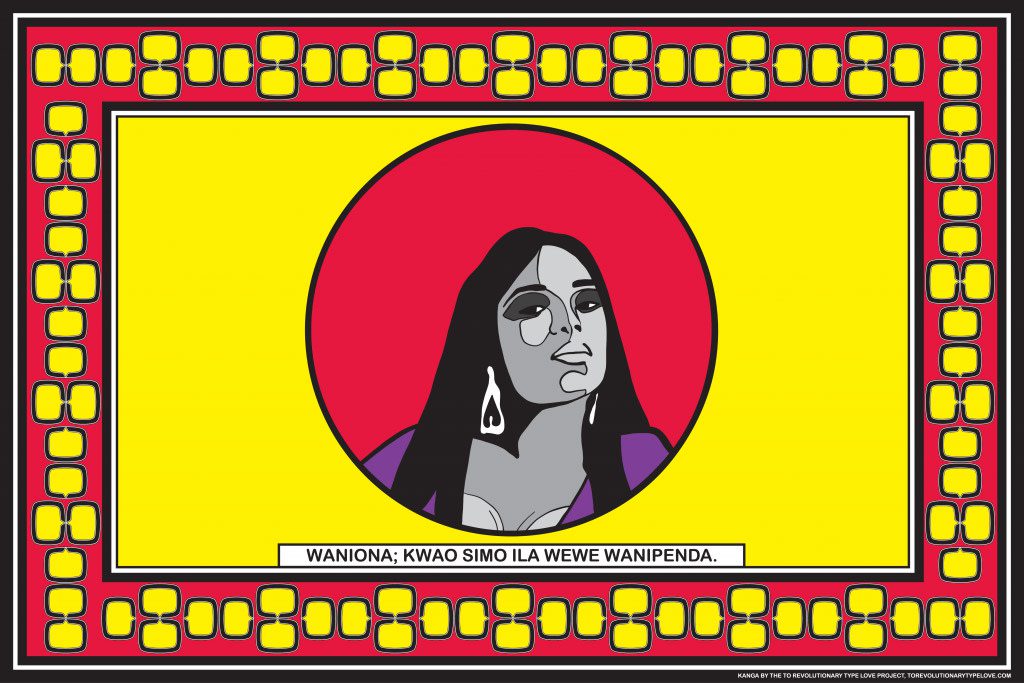 Kawira Mwirichia, Kanga Love, Angola, featuring Titica Cantora and a quote by Awour Onyango “You see me, they think I am invisible, you love me anyway”.

Mwirichia’s most famous work, Kanga Love, literally documents the “independence” struggle of queer organizations across Africa, assigning each country a kanga, the cloth from the Swahili coast that is often lain down at the feet of brides in contemporary Kenyan weddings. I offered a quote for the “Angola” kanga and was part of the To Revolutionary Type Love exhibition, during which I mentioned to Kawira that all art was propaganda, even when it appeared to be “for art’s sake.” Karuga’s seemingly docile collages of rural and peri-urban scenes reveal certain truths of her “missing” thirty-seven years. Why rural scenes? Nairobi, in 1952 Kenya’s only city, was designed as a non-native area and would only become desegregated in the 1960s and 1970s. Rural ancestral land was key to the independence struggle, so the fact that Karuga took fractured fragments from foreign magazines represented for me the journey of reforming a past lost to colonialists, missionaries, and settlers, lost in a foreign language and buried under foreign ideas, forced underground through silences, disappearances, and socializations.

We don’t have a concise art history of the region because of these colonial and postcolonial fractures. Fractures Karuga sought, conjured up, and put together to form her collages. Fractures the younger artist Mwirichia sought to fill through reimagining and repurposing historical fragments. Fractures we are yet to fully recover from at the intersection of all our identities. We have at least this: Karuga and Mwirichia’s works, and a willingness to remember them loudly.